Iced Iguanas and Fried Flying Foxes Falling From the Sky

It’s rarely a good sign when things unexpectedly fall from the sky. It’s worse when those things are living or recently dead creatures. It’s probably a sign of extremely unusual weather when some of the creatures are frozen while others are cooked alive. Is it climate change? Or something worse? During a week of freaky hot and cold spells, residents of Florida saw icy iguanas dropping from the sky while people in Australia were bombarded by fried flying foxes boiled to death by the heat. Worried yet?

A number of news sources in southern Florida reported about people finding rigid iguanas in their yards or around their pools during the sub-40 degrees Fahrenheit temperatures caused by the recent so-called ‘bomb cyclone’ that iced the east coast of the U.S. One reporter covering the phenomenon was hit by a falling iguana while driving. The lizard came back to life and ran off, leaving a huge crack in the reporter’s windshield.

Social media posts showed people carrying stiff iguanas by the tail – a practice quickly rejected by wildlife experts who warned that these non-Floridian invaders were merely in a state of hibernation due to the cold and would not be happy when awaked upside down with a human on their tail or when they find bruises due to falling frozen from trees. It’s better to use this opportunity to trap them, according to Kristen Sommers, who oversees the nonnative fish and wildlife program for the Florida Fish and Wildlife Conservation Commission. She told CBS News:

"This provides an opportunity to capture some, but I'm not sure it's going to be cold enough or long enough to make enough of a difference. In most cases, they're going to warm back up and move around again, unless they're euthanized."

Meanwhile, in the air down under where it’s summertime …

The Campbelltown-Macarthur Advertiser reports that 111.5 degrees Fahrenheit (44.2 degrees Celsius) temperatures in Campbelltown, New South Wales, knocked a colony of flying fox bats out of their trees near the town's train station. The flying foxes are favorites of locals, so Kate Ryan, the colony manager, organized volunteers to help rescue them. 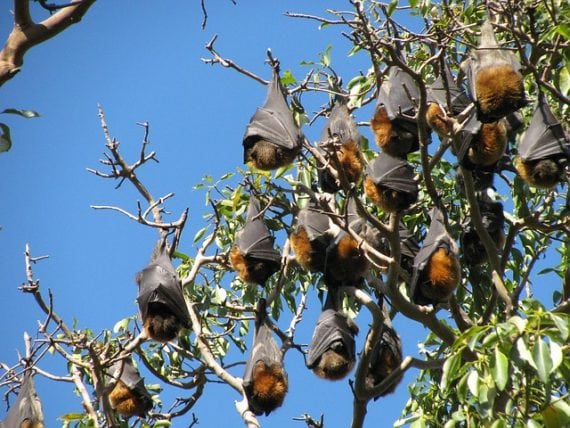 "They basically boil. It affects their brain — their brain just fries and they become incoherent."

Over 200 of the flying foxes (Pteropus poliocephalus), which can have wingspans over a meter (3.3 feet) and weigh over 1 kg (2.2 lbs.) were found dead on the ground, with more caught in the trees. Ryan said most of the dead were babies whose smaller bodies were unable to regulate their temperature. Fortunately, the heatwave has dissipated and the flying foxes are back to eating insects and pollinating fruit trees.

Until the next mysterious crisis (is it really that mysterious?) knocks the iguanas and the flying foxes out of the sky again.