Letter Indicates Escape from Alcatraz May Have Been a Success

“My name is John Anglin. I escape from Alcatraz in June 1962 with my brother Clarence and Frank Morris. I’m 83 years old and in bad shape. I have cancer. Yes we all made it that night but barely!”

With that opening line, a letter obtained by a San Francisco television station has rekindled interest in one of the greatest ‘failed’ escape attempts in history. On the night of June 11, 1962, three imprisoned bank robbers tricked guards with dummies, pushed themselves through vents and fled the Alcatraz Federal Penitentiary on Alcatraz Island – home of some of America’s most notorious criminals and considered to be escape-proof. Frank Morris, John Anglin, and Clarence Anglin appeared to have left the island in rafts made from raincoats, but they were never seen again and both experts and officials wanting to protect their reputations claimed the three men drowned, even though their remains have never been found. KPIX-TV, a CBS owned-and-operated television station in San Francisco, revealed this week that it had obtained exclusive rights to expose a letter allegedly written by escapee John Anglin that was sent to the San Francisco Police Department in 2013. The letter states that the men successfully escaped and John lived in Seattle, North Dakota and, at the time it was sent, Southern California. It also states that Frank Morris died in 2008, Clarence Anglin in 2011 and the writer wasn’t doing too well physically in 2013, when he would have been around 83. The alleged John Anglin offered a deal:

“If you announce on TV that I will be promised to first go to jail for no more than a year and get medical attention, I will write back to let you know exactly where I am. This is no joke…”

Is the letter for real, a joke or something else? KPIX-TV does not offer any clue as to why the San Francisco police kept the letter hidden for five years (although they may have decided it was a hoax) nor does it reveal exactly how it was obtained. The letter has been given to the U.S. Marshals Service, which is the primary Justice Department agency for fugitive operations, the Federal Witness Protection Program and the Justice Prisoner and Alien Transportation System and is the sole agency responsible for investigating the case. It told KPIX that the FBI was brought in to conduct a handwriting analysis and check for fingerprints and DNA, but the results were inconclusive and the case is still closed. 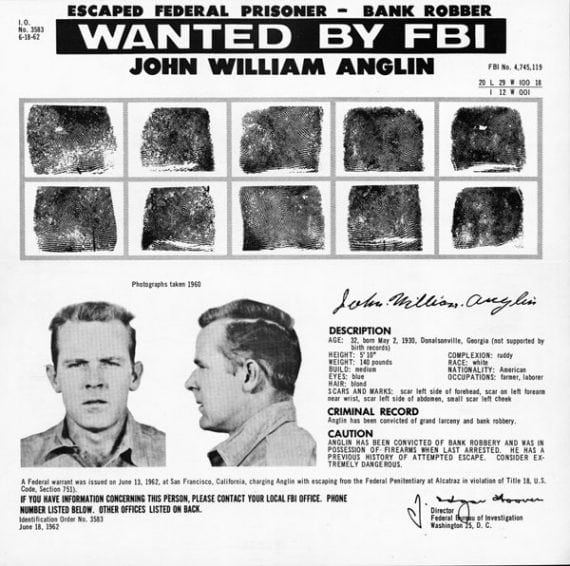 That doesn’t please Ken and David Widner, nephews of John Anglin living in Atlanta, who told The Sun that they want to know why the letter was kept secret for so long – even though they don’t believe it’s from their uncle. David Widner says it’s “inhumane” that the police didn’t notify the family, especially since the writer indicated that he was dying, and Ken Widner says his uncle would have gone to his family, not the police.

These are the two brothers who a few years ago provided police with a photo of John and Clarence allegedly taken in Brazil in 1975, along with the story that they had help in traveling to South America after they escaped. The photo was supposed to have been taken by family friend Frank Brizzi, a criminal and conman, and a deathbed confession uncovered in 2016 alleges that the men were picked up in the bay by a boat driven by an accomplice.

Was the letter written by John Anglin? Is he still alive? Will the truth ever be told? One thing is for certain … there’s more to the infamous “Escape from Alcatraz” than has been covered in movies, documentaries, investigations, family legends, secret letters and deathbed confessions.