Looking Back At The “Green Drive Beast”

In May 2005, a synchronicity of strange proportions occurred. Four years earlier (and almost to the day) me and my ex-wife Dana, were hanging out at the Edenfield Hotel in Lytham St. Anne’s, England. Four years on, a strange creature was seen in the area – and on one occasion very nearly within literal spitting distance of the driveway of the hotel. Under the eye-catching headline of "The Beast of Lytham," the following story appeared in the British national newspaper, the Daily Mail, on May 6, 2005:

"Dubbed The Beast of Green Drive, the mysterious creature has been spotted roaming in thick woodland at a beauty spot. About as tall as a collie dog but with huge ears, a large mouth and a lolloping gait, the peculiar animal has caused a frenzy of chatter in the normally sedate Lytham St Anne's, Lancashire. The creature, according to witnesses, is seen mainly in the largely wooded area of Green Drive, where there is plenty of brush and scrub to conceal a large animal." 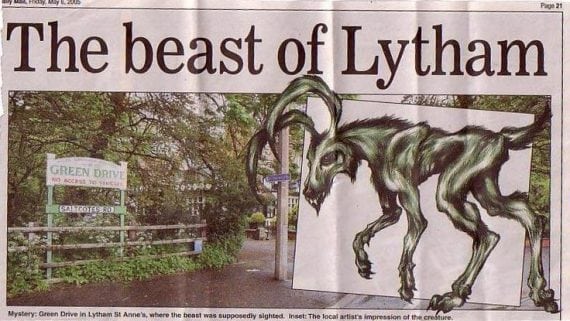 Sandra Sturrock, who was walking her dog when she came face-to-face with the animal, said: "I caught sight of something large ahead of us. It was like a large collie, light in color with large sticking-up ears. It was watching me and my dog. I stood completely still for several minutes trying to see it more closely. I called my dog and put him on the lead and slowly inched towards the animal to get a better look but it ran off. I then went to where it had been and my dog went mad, sniffing all round the area. I have never seen anything like this before. I lived in Cheshire for ten years and frequently saw foxes and the odd deer. They usually disappear quite quickly and do not remain watching you.'"

Willie Davidson, a house-painter, was another witness to the odd-looking: "I was playing bowls near Green Drive when I heard a snarl behind me. It was like a monster out of Doctor Who and it needs tracking down." A further source, who didn't want to be named, said: “I was walking along the drive when I saw it in the fields alongside. I have no idea what it was. I could tell it was the size of a Labrador, but looked more like a hare. It can’t have been either - it was surreal."

One theorist suggested that the beast was not something weird and dangerous, but nothing more than a Muntjac deer, one of the last remaining from a herd brought to Lytham Hall by the local squire over a century before. However, the description of the creature looking like "a monster" out of the popular British sci-fi series Doctor Who inspired very little faith in the idea that the animal was merely a deer. 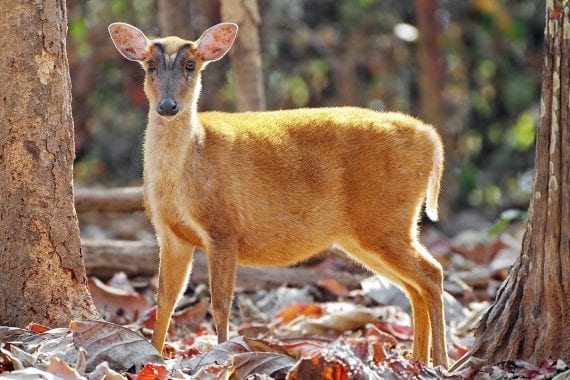 A spokesman for Lancashire Police said at the time: "We have checked local zoos and farms, but nothing seems to be missing. It is very bizarre. We have handed it over to the RSPCA [The Royal Society for the Prevention of Cruelty to Animals] to investigate." Experts at Chester Zoo were baffled after being shown a drawing of the Beast of Green Drive. A spokesman said that: "It does not look like any mammal currently alive. It looks more like a mythical beast to us."

Mythical, an unknown creature, a deer, or something else, the creature soon left for pastures new and was not seen again. Or was it? Some suggested, two years later, that the creature was merely "an elderly fox" which lacked much of its hair. An answer to the riddle? Maybe. Maybe not.