Hot on the heels of the mysterious secret satellite launch by SpaceX that no one seems to be able to find and the mystery of why four space nations launched rockets and missiles in four days last month, another mysterious launch took place in the U.S. with the sinister mission name, “Mali Nunquam Praevalebunt.” For those not fluent in Latin, that means “Evil will never prevail.” And to show it means business, the logo shows a Knight Templar waving his sword as he battles with a dragon.

This can’t be good. 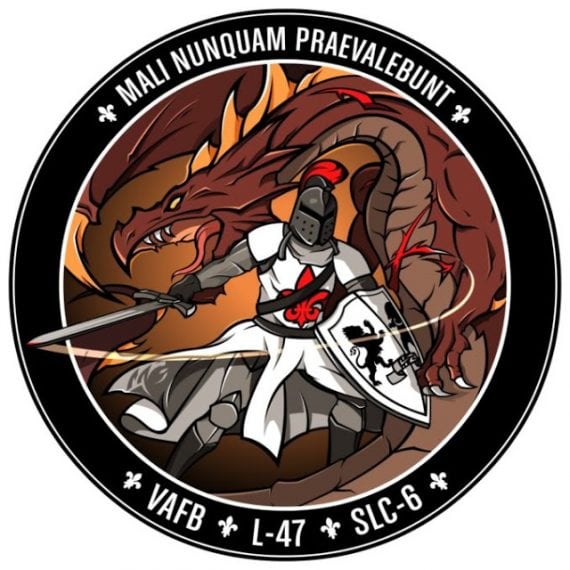 Various space-watching and media sites announced that a United Launch Alliance Delta 4 rocket carrying the classified NROL-47 spacecraft lifted off from Vandenberg Air Force Base in California on January 12 at 2:11 p.m. PST, heading south over the Pacific Ocean. As we now know is standard with top secret launches, live video coverage ended when the nose cone fairing was jettisoned and the satellite was positioned to be deployed.

Why a Knights Templar symbol and what evil is this high-flying knight being sent to battle? The NRO in NROL-47 stands for the National Reconnaissance Office, a Defense Department intelligence agency on par with the Central Intelligence Agency (CIA) and the National Security Agency (NSA). The “knight templar” is joining the NRO’s fleet of radar reconnaissance satellites, says launch director Air Force Maj. Allen Varghese … and that’s about all he’s willing to say.

“It’s a classified payload for the NRO. We can’t go into the details of what the payload does, but it’s a national security priority, and it’s mission will ensure that the warfighters across the globe have the appropriate intel that they need to be able to support operations.”

Experts tracking the launch say its orbit will be opposite the Earth’s rotation and most likely over the poles rather than around the equator.

Why, if it’s a secret spy satellite, would the NRO call attention to it with the sinister slogan and symbol? “Evil will never prevail” has obvious biblical connotations -- here's a similar passage in Psalms 21:11: “Though they intended evil against You And devised a plot, They will not succeed.” Then there’s the Knights Templar – warriors of the Crusades , protectors of the finances of the Catholic Church and possible guardians of the Holy Grail. Who is the NRO sending this kind of message to?

The dragon is an obvious symbol of China and that country has been launching spy satellites of its own recently, but so have Russia, Japan and India. What’s on THEIR mission patches? Could it mean something else? Are these nations building a satellite wall against some ‘evil’ dragon flying in from somewhere else? In the galaxy? Or beyond? Why are they calling it “evil”?

And why in Latin? Have the powers that be already received an alien message in Latin? Veni, vidi, vici?

Has anyone brought up the Black Knight yet?