New Book Claims Photos of Alien in Spaceship are Real

It allegedly happened over 60 years ago and at least one government official was a witness to extraterrestrials and their spaceship, which was visited and photographed by two other people. No, this isn’t about the event you’re thinking of … and not that other one you’re thinking of either. According to a new book about UFOs set to be published next month, this occurred in Italy in October 1957 and, while known in that country, has photos that have never been revealed outside of Italy until now. Do you want to believe?

“These rare and extraordinary photographs, as well as two photographs of the alleged extraterrestrial pilot… have been published here for the first time.”

The book is called “UFO Contacts In Italy: Volume One : 1907 – 1978” and it’s described as “a limited selection of some of the most impressive and interesting events from over 12,000 UFO Italian cases CUN has in its files and occurred in Italy during the 20th century.” CUN is Centro Uufologico Nazionale, the National UFO Center of Italy. A nonprofit founded in 1966 to collect information on UFO and alien encounters. The book devotes chapters to specific incidents (“1936: Italian Air Force idroplane formation intercepts a UFO over the Thyrrenian Sea”; “1951: A CE3 with six UFO entities near Ferrara”), time periods (The early Sixties: 1961-1964”; 1957-1958 Strange Sightings) and similar groups (“WWII UFOs”). In addition to detailed reports, the book includes a number of cases that have photographic evidence. 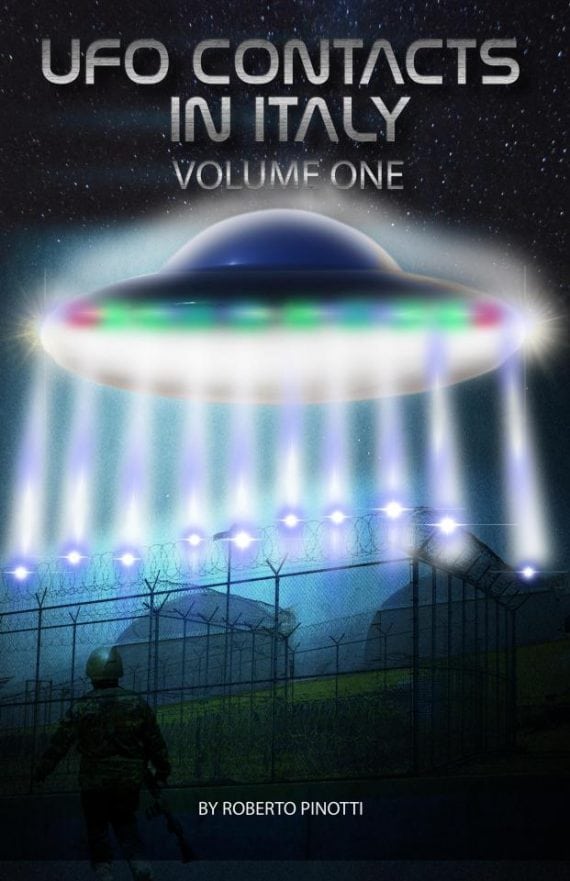 The author of “UFO Contacts In Italy: Volume One : 1907 – 1978” is Dr. Robert Pinotti, the founder of the National UFO Center (CUN) who is considered to be a leading expert in European UFO sightings. In that capacity, he has acted as a UFO consultant for the Italian government and claims to have seen secret documents on encounters from the Italian Department of Defense.

Yeah, yeah, yeah. What about the photos of aliens and the inside of their ship?

Pinotti claims the photographs (seen here) were taken in October 1957 in Francavillia, where humanoid aliens began making periodic visits and interacting with the local residents starting in 1956. The pictures were allegedly taken by two men who boarded the 24-meter (79-ft) spacecraft at the invitation of one of the humanlike ETs, who wore sunglasses as he (it appears to be a he) showed them around the 10-meter (31-ft) cabin and allowed a picture of him wearing sunglasses to protect his eyes. Pinotti claims the photos first appeared in 1958 in a book called "Sono Extraterrestri" by Alberto Perego and have never been seen outside of Italy.

Some ufology experts will recognize this story as the so-called “Friendship case,” a decades-long series of alien encounters in and around Pescara, Italy, from 1956 through the 1970s that was covered in a 2009 documentary, “The Friendship Case,” which contained photographs (although apparently not the ones in the book) and interviews with some of the alleged hundreds of witnesses, many of whom were said to belong to Italian high society and some in government positions.

It appears that Dr. Pinotti is promoting the release of "UFO Contacts In Italy: Volume One : 1907 – 1978” to various media outlets and they have picked up on this particular story and its grainy photo of an alleged alien. However, the rest of the book looks like it will be pretty interesting and promises at least a second volume with additional sightings from 1978 to the present.

It may not be time to believe just yet, but it's definitely time to read.