If you’ve ever seen a rare glowing viper dogfish, you’d remember it. This small species of shark glows in the dark and has a set of triangular extendable jaws lined with crooked but needle-sharp teeth. The only thing scarier than seeing a live one is seeing dead ones – that’s not a good sign for these deepwater fish and the deep waters where they should have been.

Earth Touch News Network reports that five of the rare viper dogfish (Trigonognathus kabeyai) were caught recently during a routine survey of marine life conducted by the Institute of Aquaculture in the Taitung area on the southeast coast of Taiwan. They were netted at a depth of 350 meters, about the depth they stay at during the day before moving up to 150 meters at night. Unfortunately, four of the viper dogfish were dead, but the fifth apparently survived for a day. 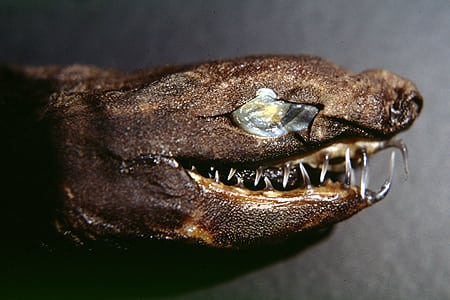 While their looks could kill, the viper dogfish is no threat to humans. They reach a maximum length of about 54 cm (21 inches) and you can see them coming because of the light-producing cells on their underside. These photophores don’t help them see much at 350 meters, so biologists suspect the viper dogfish use them to attract mates or prey. A survey of the contents of their stomachs found bony fish (like lanternfish) and crustaceans that didn’t escape those expandable jaws and razor teeth. (A great gif of a viper dogfish expanding its jaws and eating a fish can be seen here) Unfortunately, those features don’t protect the viper dogfish from being eaten by bigeye tuna.

While extremely rare, the viper dogfish have been seen before off the coast of Taiwan as well as near the coasts of Japan and Hawaii. Because they’re seen so infrequently, little is known about their behavior or numbers. Luckily, they’re not tasty to humans so that’s one predator they don’t have to deal with. However, that doesn’t explain why five were caught at one time in such a small area. Are they taking over tsunami warning duties from the oarfish?

Whatever the case, Bigeye Tuna and BonyFish & the Crustaceans are great names for bands.