Return of the Windy City Owl: Is a Big Bird Still Flapping Around Chicago?

Last May, a sudden flourish of reports involving a large, winged animal began to crop up in Chicago. Several of the reports were filed with the Mutual UFO Network, and at that time the group's national communications director, Roger Marsh, warned that people should “remain skeptical until witness interviews have been conducted and more case evidence is assembled.”

Since that time, it appears that a few reports of something large and birdlike have continued to come out of the Windy City, although it's anyone's guess as to what, precisely, these incidents may represent.

In a recent article appearing at VICE (which in itself is rather unusual), one of these alleged encounters was recounted by Chicago resident John Amitrano, who described seeing something unusual in an un-dated encounter that occurred near Logan Square.

"I saw a plane flying, but also something moving really awkwardly under it... It didn't look like a bat so much as what illustrations of pterodactyls look like, with the slenderness of its head and its wing shape. I know what birds and what bats look like. This thing didn't have any feathers or fur, and it didn't fly like anything I've ever seen.”

This report, which leaves a good bit to the imagination, is interesting at very least. While it does not provide enough details to conclusively help determine the identity of the animal or object Amitrano saw, it does provide a case report from a source apart from MUFON. This is significant because of the fact that during last spring's short spate of encounters, most (if not all) of the alleged incidents were filed with MUFON. 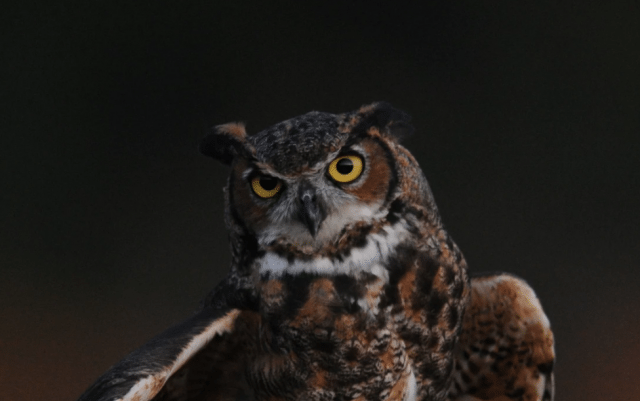 To help give a bit of background into all this, when the initial series of reports appeared online, I wrote about these Chicago "giant owl" incidents for MU, where I noted:

One thing that is particularly telling about this case is that the reports appear to have been exclusive to MUFON; no similar reports of large, dark colored owls had appeared elsewhere around that time. Additionally, if the incidents described are legitimate, it does seem odd that they would be reported to a UFO investigation group like MUFON, rather than local news affiliates. The possibility that any legitimate reports along these lines might have been ridiculed or dismissed by local media might be worth consideration, though at present, the evidence at hand strongly suggests the work of hoaxers.

Similarly, Roger Marsh, who presented the initial write up at the MUFON website, noted on April 27th that, “at this point in the investigation, a hoax cannot be ruled out.”

I was fairly convinced at that time (as my friend Roger Marsh also seemed to be) that the incidents were probably part of a hoax. Similarly, my fellow MU writer and colleague Paul Seaburn noted last April that some of the incidents appeared to precede the release of a new Mothman documentary, which might at least be viewed as rather convenient but were later verified to be not connected in any way.

On the other hand, perhaps if there are ongoing reports of a large, winged animal that has continued to be seen in Chicago, it does warrant further attention. According to Lon Strickler of the Phantoms and Monsters blog, not only have there been additional reports since last spring, but there were enough to form the basis for a book Strickler authored, titled Mothman Dynasty: Chicago's Winged Humanoids, which was discussed in the recent VICE article.

VICE also featured the opinion of Dr. David A. Gallo, a professional psychologist with the University of Chicago, who discussed "a phenomenon where there's basically some real witnessed experience," but where the mind fills in details where there are gaps in memory or other details missing. According to Gallo, "if something is suggested to them subsequently as a plausible scenario—like a Mothman or whatever—that person might be inclined to fill in the gaps with that.”

There are several studies that address phenomena similar to what Dr. Gallo describes (such as those listed here and here), which may indeed help account for some unusual or extraordinary experiences. This is complicated, however, by the apparent presence of numerous similar sightings of the alleged creature.

What is the "mystery owl" of Chicago, if any such thing exists? While the reports have largely been shuffled into the "Mothman" deck by many commentators (and hence essentially relegated to fringe discussions), perhaps there will be further details to emerge that will bear fruit. We can only hope it will involve some kind of tangible data, which may help identify the presumed creature in question.

Until that time, we'd do best to keep an eye out for any further developments... albeit a critical one.