We hear a lot of tales of crashed UFOs and dead aliens secretly taken to well-guarded government facilities for study. But, what about cases where the incident/discovery went down in the heart of the sensitive facility itself? That's altogether quite another thing. I'll share two such stories with you, one from the U.K. in the 1990s, and the other from the United States in the early part of the 1980s. Both are deeply weird, but for extremely different reasons. As will soon become apparent.

Porton Down is an installation located in the English county of Wiltshire. Its overwhelmingly-classified work focuses to a very significant degree on exotic viruses, chemical-warfare and biological-warfare. Although work at Porton Down originally, and secretly, began at the height of the tumultuous First World War, it was not until the dawning of the 1940s that the installation became the central hub for British interest in, and concerns relative to, the expanding realms of chemical- and biological-warfare. From 1946 onward, one year after the successful defeat of Nazi Germany, Porton Down’s work began to focus more on the defensive – rather than chiefly offensive – aspects of such issues, and in 1957 the installation was duly christened the Microbiological Research Establishment.

By the late-1970s, a decision was made to place the MRE under the control of a civil body. As a result, significant reorganization duly occurred: on April 1, 1979, the MRE became the Center for Applied Microbiology and Research. Then, in 1995, it was absorbed into the Defense Evaluation and Research Agency. Six years later, there was yet another change: DERA split into two organizations, a private body called QinetiQ, and the Defense Science and Technology Laboratory, a body steeped in official secrecy, as a result of the fact that it is an arm of the Ministry of Defense. After that, the facility became known as DSTL, Porton Down.

All of which brings us to a very strange story. Jonathan Downes is the director of the U.K.-base Center for Fortean Zoology. But, it's not just strange creatures like Bigfoot, Nessie, and Mothman that have attracted Downes' attention. It's the issue of Crop Circles too. For years, there have been rumors of classified, military/government investigations into the Crop Circle phenomenon in the U.K.

Downes publicly stated something that may have had a bearing on those same rumors. He said, in 2000: "I am aware that midway through 1996 on land adjacent to the Government’s chemical and biological research establishment at Porton Down, Wiltshire, a Crop Circle was found. When it was first seen, the circle was still in the process of being formed and had actually been surrounded by both troops and police who had cordoned off the area."

I have heard variations on this very odd story over the years, suggesting that an intricate formation was indeed found within the grounds of Porton Down in the mid-90s. Whether it was the work of fence-jumping circle-makers of a very human mind, or the work of something much stranger, is very much still open to debate. Of course, if the formation really was forming as the police and the military watched on, then that effectively rules out a human connection. Moving onto Area 51...

From 2003 to 2009 I lectured at Ryan Wood's annual UFO Crash-Retrieval Conference, which was held in Las Vegas, Nevada. As is so often the case at such conferences, an attendee came up to me at the 2008 event with a very strange story to tell. Aged around thirty he said that his now-retired father had worked out at Area 51 in the early 1980s, specifically in the development of Stealth technology for military aircraft. The guy said that on several occasions, in the 1990s, he had asked his father about the rumors of crashed UFOs and dead aliens held at the secret vase. His father said that the only thing he knew about aliens at Area 51 came from watching TV shows. Indeed, he told his son that he had never seen any evidence at all of alien-related activity at Area 51. But, there was one strange event that the man was willing to share with his son - and which was then shared with me.

The story told to me was that on one occasion in January 1981, a pedal bike was found deep in a remote part of the vast amount of land that is collectively known as Area 51. Yes, a bicycle. The highly-sophisticated sensors that are carefully placed all around the facility had picked up the sudden presence of something not far from one such sensor. So, a security team was quickly sent out to investigate. It was that team, I was told, which found the bike. But, there was something very strange about the bicycle: it was extensively damaged - as if it had plummeted to the ground from a great height. 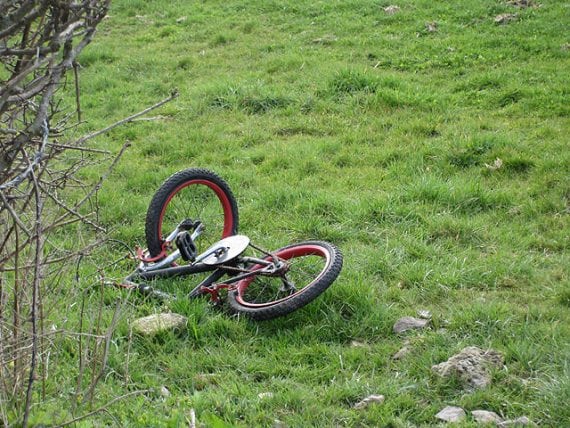 Had it fallen from an aircraft? Probably not! It's a fact that unauthorized flights over Area 51, and in the immediate vicinity, are treated very seriously. Any such event over the base would have resulted in drastic (maybe even deadly...) action. And, of course, the base would likely have gone on lock-down. Even NASA's astronauts have almost found themselves in trouble for photographing the facility from space.

The guy who shared the story with me said that the finding of the bike was a matter of deep concern: how had it got there? Where was the rider? Who was the rider? Why did the bike look like it had fallen from a great height? There were no answers. As a result, the investigation was finally closed down. Quiet and concerned discussion of the weird affair apparently continued for quite some time though, among those who had heard of it. The whole thing, the man told me, became a bit "of a legend."