Super Bowl Sunday Asteroid Worries Some, But Not Tom Brady

While Houston has the Johnson Space Center and professional sports teams named the Rockets and the Astros, sports and space rarely have close encounters anywhere else. That could change on Super Bowl Sunday, February 4th, when an asteroid NASA has classified as “potentially hazardous” passes potentially close to a planet hazardously covered with hot wings, chili and beer. Is this the only way the New England Patriots can lose this  game?

According to the oddsmakers as of the time of this writing, the Patriots are five-point favorites over the Philadelphia Eagles in Super Bowl LII. Meanwhile, the oddsmakers at NASA have slightly favored Earth over asteroid 2002 AJ129, rating the asteroid potentially hazardous because of its size (up to 1200 meters or .75 miles in diameter, speed (67,000mph or 107,826kmh) and proximity to Earth (within within 4.65 million miles). 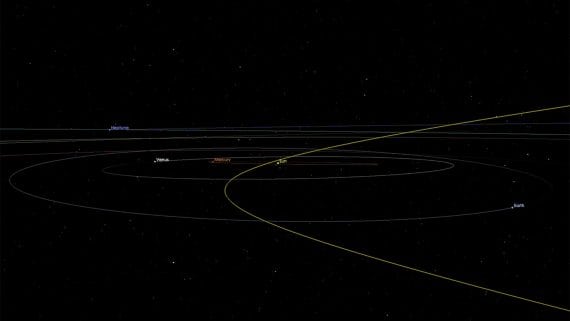 Covering the asteroid for NASA is Paul Chodas, manager of NASA’s Center for Near-Earth Object Studies at the Jet Propulsion Lab, who had this to say about the Super Bowl meetup:

“We have been tracking this asteroid for over 14 years and know its orbit very accurately. Asteroid 2002 AJ129 has no chance — zero — of colliding with Earth on Feb. 4 or any time over the next 100 years.”

Could the underdog asteroid 2002 AJ129 actually win -- knocking the larger and better-looking 'Tom Brady' of space objects out of its dominant orbit? Maybe … but not this year. At its closest point (occurring at 4:30 pm EST) on February 4, it will pass (not run) 2.6 million miles from Earth – about 10 times the distance between Earth and the Moon.

Here’s a better question: is that brush-by about 2 hours before game time close enough to disrupt New England quarterback Tom Brady’s pregame preparations, meditations, ritual sacrifices or whatever he does to have won five previous Super Bowls? Unfortunately, Eagles fans, that’s not even close enough to tear people at NASA’s Planetary Defense Coordination Office away from watching the pre-game interviews on the big normally-used-for-tracking-asteroids screen.

With those odds, is there any reason to get excited about asteroid 2002 AJ129’s Super Bowl flyby? Of course there is. Eagles and underdog fans now have two things to root for, while Patriots fans have something to watch while the other team has the ball. If you need more help, here’s some advice from a 2010 Super Bowl commercial:

The Tunguska Explosion: Fact and Fiction