Would you voluntarily wear a ‘God helmet’ whose owner claimed it would allow you to ‘experience’ God? Would you do it for science instead of religion? Do you think you’d be more likely to have the ‘experience’ if you were at a music festival? What about if you were under the influence of a different spirit – alcohol? Just such an experiment was conducted recently at a Dutch music festival and the results were strangely different than you might expect.

For those not familiar with it, the God Helmet was developed by inventor Stanley Koren and neuroscientist Michael Persinger (you can see one here) to study the effects of mild electromagnetic stimulation on the temporal lobes. They were especially looking for signs of creativity, religious experience, altered states and the feeling of the ‘presence’ of God. Persinger claimed his goal was to test his various hypotheses about how the brain functions. He theorized that the left/logical side of the brain is dominant, that disturbing the communication between the sides (as with the God helmet) allows the right/creative side to take over and that disturbance might explain some spiritual and paranormal experiences. 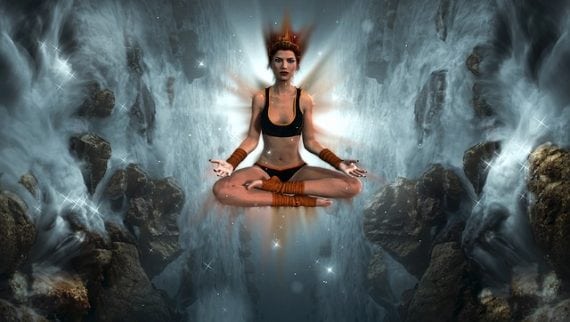 Needless to say, the God Helmet and Persinger's experiments were controversial and the results were disputed by the scientific, religious and paranormal communities. To avoid that, Dutch scientists from the University of Amsterdam decided to use a placebo God Helmet (a skate helmet with wires attached to a lighted box that did nothing) and look for signs to identify what types of people are most susceptible to the powers of the God helmet – real or placebo – as study author David Maij (published in the journal Religion, Brain & Behavior) explains to in PsyPost.org:

“From previous studies, we knew that the God Helmet is able to elicit authentic extraordinary experiences (i.e., ‘feeling of a presence’; ‘out-of-body’ experience) in a minority of the subjects we test, With this study we wanted to examine: What type of traits are associated with people who get extraordinary experiences? Would alcohol, by decreasing prefrontal regulation, increase the percentage of people that are responsive to the God Helmet?”

At the recent Lowlands 3-day musical festival, 193 volunteers wore the faux God helmet while blindfolded and listening to white noise in headphones. They were instructed to click on a mouse when having any kind of unusual experience. In the review afterwards, participants who clicked said they felt they were floating, heard voices and saw visions, as well has having less interesting sensations of itching, dizziness or heart palpitations.

When they looked at the personality surveys, the researchers found that people who said they were spiritual believers were more likely to have an experience in the God Helmet. The big surprise was that alcohol had no effect on it… no matter how intoxicated the volunteer was. Maij thinks the participants were afraid to mix too much alcoholic and religious spirits and may have tried to stay sober. He hopes to conduct future tests with more drinking.

With or without wine and whiskey, the study showed that spiritual people had more experiences with the God helmet. Does this mean that certain personality types are predisposed to religious beliefs or paranormal experiences? It would make sense. Does this also mean that they same people believe in both religion and extraterrestrials? That would make sense too.

What does it say about someone who would voluntarily wear something called a God helmet?