The Stephenville UFO Wave: 10 Years On

Just a few days from now we will be marking the 10th anniversary of the Stephenville, Texas wave of UFO activity and encounters. It was a wave which caught the attention of not just UFO researchers, but also much of the world's media - and the U.S. military, too. There is no doubt that the case was - and still is - steeped in intrigue and mystery. And, as the tenth anniversary looms large on the horizon, there's also no doubt that there are still enough weird leads and strange aspects to the story to allow for a new investigation of the case. Let's take a look at the timeline and how things went down.

It was on January 7 that matters really kicked off in Stephenville - and in big-time fashion, too. Consider the following, from Associated Press, on January 14: "...In this farming community where nightfall usually brings clear, starry skies, residents are abuzz over reported sightings of what many believe is a UFO. Several dozen people – including a pilot, county constable and business owners – insist they have seen a large silent object with bright lights flying low and fast. Some reported seeing fighter jets chasing it."

Steve Allen, the owner of a freight company was quoted as saying: "People wonder what in the world it is because this is the Bible Belt, and everyone is afraid it’s the end of times." No wonder Allen was so vocal: he said he saw a massive craft in the skies above, somewhere in the region of one-mile in length and half-a-mile in width. He said that the object was "positively, absolutely nothing from these parts." 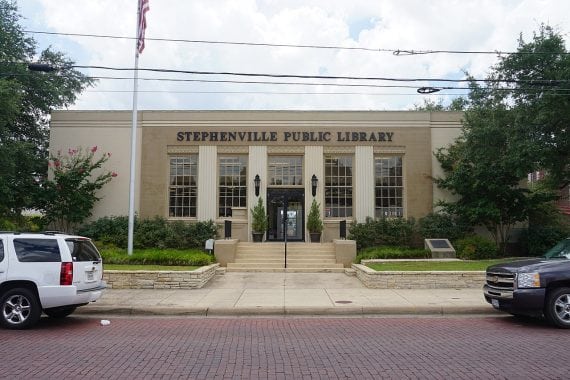 Intriguingly, witnesses claimed to have seen military F-16 aircraft pursuing the gigantic aerial vehicle. This, however, was denied by staff at the 301st Fighter Wing at the Joint Reserve Base Naval Air Station in Fort Worth, Texas. Major Karl Lewis stated with respect to this issue, on January 15, that no F-16 aircraft were in the skies of Stephenville on the night of the 7th. The military suggested that they were "90 percent sure this was an airliner. With the sun’s angle, it can play tricks on you."

Needless to say, the local media were quick to report on the matter. The Fort Worth-based Star Telegram newspaper told its readers the following, also on January 15: "Stephenville’s latest close encounter is weirder than any light in the sky. Stephenville is under assault – not by Martians, but by people hunting them. The phones haven’t stopped ringing at Steve Allen’s trucking company in nearby Glen Rose. He’s the guy who was out Jan. 7 watching the sunset at a friend’s house near Selden when they all saw some weird flashing lights. Now he can’t work for all the calls from London and around the world. Some of the callers are scarier than space aliens.'I’ll be OK,' he joked Tuesday, 'as long as I don’t get abducted.'"

Also on the 15th, The Raw Story had its say on the mysterious matter: "Dozens of eyewitnesses have reported seeing a mile-long UFO being pursued by fighter jets last week in the small town of Stephenville, Texas. 'It was very intense bright lights...and they spanned a wide area,' said one woman. NBC News spoke with County Constable Lee Roy Gaitan, who offered a somewhat different description. 'I saw two red glows,' he said. 'I never seen anything like that, never.'" Just over a week later, specifically on January 24, things turned both intriguing and strange. Staff at the Dallas Morning News explained exactly why: "The U.S. military has owned up to having F-16 fighters in the air near Stephenville on the night that several residents reported unusual lights in the sky. But the correction issued Wednesday doesn’t exactly turn UFOs into Identified Flying Objects. Several dozen witnesses reported that they had seen unusual lights in the sky near Stephenville shortly after dusk Jan. 8. One sighting included a report that the lights were pursued by military jets. Military officials had repeatedly denied that they had any flights in the area that night."

The Air Force stated of this new and eye-opening development: "In the interest of public awareness, Air Force Reserve Command Public Affair realized an error was made regarding the reported training activity of military aircraft. Ten F-16s from the 457th Fighter Squadron were performing training operations from 6 to 8 p.m., Tuesday January 8, 2008, in the Brownwood Military Operating Area (MOA), which includes the airspace above Erath County." It had all been down to an "internal communications error."

Even more controversial were the claims that (a) the United Nations had gotten involved in the investigation and (b) the Stephenville affair was secretly orchestrated by New World Order-types to give the impression of an alien invasion - and for those behind the ruse to then sit back and watch the reaction. In other words, the people of Earth were being deceived into thinking that we were being invaded, when, in reality, it was a sinister program designed to allow for a further erosion of our rights and freedoms - and to achieve this by claiming that an alien attack was imminent. Of course, no-one should be surprised to learn that these two issues were never proved to be true.

As all of the above shows, there is enough data - including conflicting data and controversial claims - to warrant a new investigation, now that the 10th anniversary is upon us.