The Tunguska Explosion: Fact and Fiction

The idea that an alien spacecraft might have exploded in the sky above Tunguska, Russia on June 30, 1908 is certainly provocative and intriguing. There is, however, one issue that some proponents of this particular theory are not at all keen to highlight. Namely, that its origins can be found not within the worlds of science or high-level government secrecy, but firmly within the realm of sci-fi. It was in 1946 that Russian author Alexander Petrovich Kazantsev wrote a story that was directly inspired by a personal trip he had made during the previous year to see the atomic devastation and destruction that was wrought at the Japanese city of Hiroshima.

David Darling notes: "Kazantsev developed the idea that a nuclear-powered spacecraft from Mars on a visit to collect fresh water from Lake Baikal, had exploded, showering the area in radioactivity." There's very little doubt at all that Kazantsev's novel "helped" to nurture the idea that something of an extraterrestrial nature came to grief over Tunguska on that fateful day.

Similarly, in his debut novel of 1951 titled The Astronauts, sci-fi author Stanislaw Lem utilized the specific scenario of an alien spacecraft exploding over Tunguska as its central, overriding theme. Nearly a decade later, The Astronauts was adapted into a movie titled First Spaceship on Venus. In the big-screen version of the story, Russian scientists stumble upon a "magnetic recording device" at the site of the Tunguska blast. They soon determine that the object which exploded was nothing less than a reconnaissance vessel from the planet Venus. A translation of the recording device reveals that the vessel contained the entire Venusian population, who were coming to Earth with the specific intent of occupying our world. Their goal – and their entire race, too – is brought to an abrupt end, however, with the disastrous destruction of their huge craft.

And the fact that Tunguska continues to play a major role in the world of sci-fi only ensures that the fine line between fact and fiction becomes even more blurry and indistinct. For example, Donald R. Bensen’s 1978 novel And Having Writ used the Tunguska story as a springboard for an amusing tale about stranded aliens who are forced to manipulate the technology of early 20th Century Earth, as part of an attempt to rebuild their stricken craft. And the novels just keep on coming. 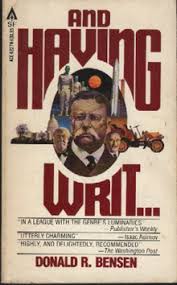 Chekhov’s Journey, written by Ian Watson in 1983, presents a scenario in which the playwright Anton Chekhov has personal knowledge of the Tunguska event – which turns out to have been caused by futuristic Russian time-travelers. Two years later, Bruce Sterling and Rudy Rucker’s story Storming the Cosmos depicted a top secret Soviet reconnaissance mission journeying to Tunguska and finding advanced technology that is then incorporated into the Soviet space program.

In the world of sci-fi themed comic-books the situation is much the same, too: in the Marvel Comics spin-off of the 1987 movie Predator that starred Arnold Schwarzenegger, the Tunguska explosion is shrouded in mystery, but is attributed to either an attempt by the Predators to hide their existence from the Human Race by vaporizing their malfunctioning craft high in the atmosphere; or by the military and governments of either Russian or America who are firmly determined to prevent the infinitely advanced technology falling into the hands of the scientific elite of each other’s respective nations.

And perhaps inevitably, even The X-Files got into the act, too, with a two-part story (titled "Tunguska" and "Terma"), in which Mulder and his long-time arch-foe, Alex Krycek, are forced to work together. They journey to Tunguska, where they learn that materials recovered at the crash-site contain a deadly substance known as "Black Oil" that contains a microbial life form capable of infecting, and controlling, any and all living creatures on Earth.

All of this is good entertainment for those who like sci-fi (a subject that, ironically, I have no interest in; I much prefer violent horror movies and whodunnits). But, for those who hang on to the idea (the hope, perhaps...?) that aliens met their deaths over Russia in 1908, we should not forget how those early days of sci-fi most assuredly had a bearing on what people thought about the still-controversial affair.