For centuries, western culture has been haunted by a variety of bogeymen, whether real or imagined. Arguably, a majority of these weird and often eerie characters were not created by pure happenstance; they were dreamed up intentionally, with the aim of keeping children prone to misbehavior in their beds at night.

However, there have been at least a few bogeymen that haunted adults too. I recall an interesting story from my childhood, shared by an elderly friend of the family named Larry, who recalled a curious, albeit amusing episode from his youth. The story went that Larry, while in his twenties, had made the acquaintance of a group of moonshiners that carried out their bootlegging along the side of a steep mountain, where they could conceal their operation.

One afternoon, Larry had been up visiting the moonshiners when they spotted a pair of individuals down the mountain, seemingly in approach toward their locale.

"Who is that?" Larry asked his friends.

"Damned revenuers!" one of the moonshiners exclaimed, pulling out a gun. It seemed apparent that an altercation would occur if these men--likely agents of the U.S. Treasury Department, who had caught wind of what the bootleggers were up to--made their way up the mountain. 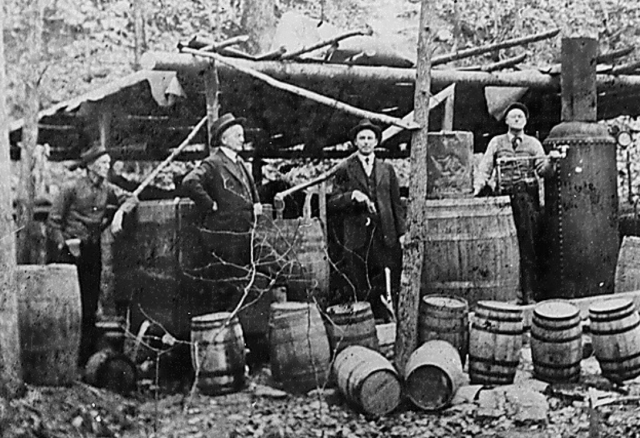 Hoping to get out of this increasingly tight situation, Larry offered an alternative. "Wait boys, I have an idea," he said, taking off down the adjacent side of the mountain, where he knew he would still be seen by the approaching men, but from a distance.

It was late Autumn, and although the weather had a considerable chill to it, Larry also had what we might call a bit of "flair for the dramatic," and had worn a long, dark colored cloak for his ascent up the mountain on this particular afternoon. Hence, as he ran down the mountain, he grabbed his cloak by the edges, flapping them wildly like huge, dark wings. As he made his descent down the mountain by the fading light of late afternoon, his "winged" appearance must have made quite an impression on the approaching treasury agents--if that's indeed who they were--for they took off back down the mountain in an awful hurry, and never returned again to bother Larry's moonshining buddies.

I remember laughing at this eccentric little story as a child, although many years later, I would come to find that similar wives' tales involving "bogeymen" used to ward off curious visitors were not uncommon in the rural south. In fact, this very sort of scenario had served as the basis for the eventual name of a North Carolina town, appropriately dubbed "Boogertown," for its legends of an eerie Bogeyman that lurked in the forest. In actuality, this tale had been composed and circulated by the local moonshiners, in order to keep townsfolk (or Treasury Agents) at safe distances. 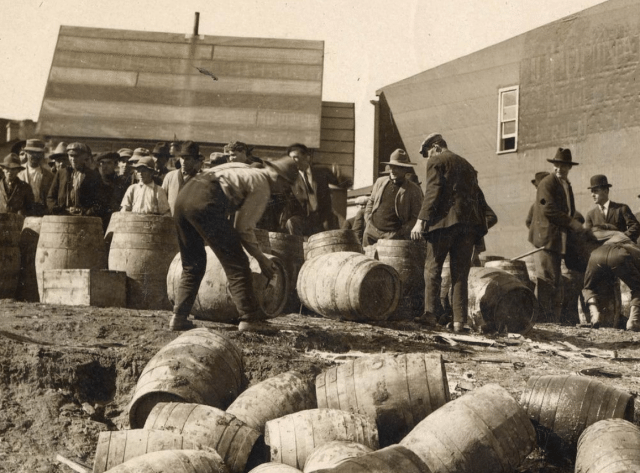 North Carolina is by no means the only state that fostered locations named after "Boogers" (a regional term throughout the southeast that denotes the same thing as a "Bogeyman"). A similarly named locale in West Virginia, called "Booger Hole", incorporates a string of mysterious killings from the early 1900s into its local mythos. The Jan 29, 1917, edition of the West Virginia Gazette Times featured the following details about this peculiar story, which involved the unsolved murders:

The Booger Hole community has been the scene of about a dozen murders, but because of the fear one class of citizens had for the other class, but little comment was made following any of the killings. One of the most mysterious cases was that of John Newman, a peddler, who disappeared while going from one farm house to another one evening. Joseph Clark was another victim. He was sleeping in a school house. He was traced by a streak of blood to a creek nearby, but nothing further was ever learned about him.

As the article already illustrates, this community had been referred to as "Booger Hole" well before the time these murders occurred; hence, it is possible that the town was named after circumstances similar to its North Carolina cousin, rather than any mysterious killer.

A number of similar "Booger Towns" exist elsewhere; one notable example is Arkansas's "Booger Hollow," which was actually a tourist attraction situated at the site of an old trading post, which included a small restaurant, a tabernacle, and even a community center within the local Masonic lodge. 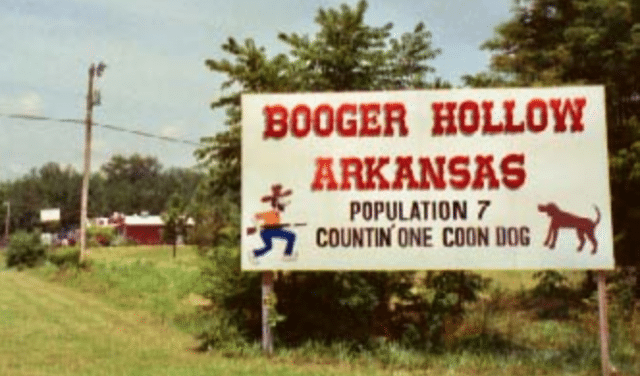 According to a now-defunct website on the history of the unusual spot:

"The name originated with the belief that the hollow was haunted due to the numerous graveyards located there. Booger in this case is a variant of bogie or boogie, as in "boogie man." So to call the place Booger Hollow is a colorful local term meaning Ghost Valley. According to the USGS, Tennessee and Kentucky each have valleys named Booger Hollow. The town of Boozeville, Georgia was formerly named Booger Hollow, although dropping 'Booger Hollow' in favor of 'Boozeville' is kind of like walking halfway to church."

As the renaming of Georgia's Booger Hollow indicates, associations with "booze" and moonshining culture sometimes remain prevalent, even after the names of these places are changed. Similar names at various other locales include

While some of these locations have little or nothing to do with moonshining, the similarities (often supernatural in nature) do persist. With little doubt, there have probably been countless other examples from around the country, which similarly borrowed their names from local history and legends about bogeymen... or as they are still fondly called in parts of the rural south, the "Boogers" said to lurk around such rural areas by night.