This story has a bridge, many deaths and a strange creature. Sounds like the Mothman but this incident actually occurred in Kenya and has another twist not found in Point Pleasant … a witch doctor.

Tuko News (“The Heartbeat of Kenya”) reported this week that a so-called witch doctor or medicine man visited the Kamukuywa Bridge – a deadly location that has seen numerous auto accidents, including one on December 11, 2017, that killed at least 19, including 12 family members. Tensions and sorrows were high in this area as that accident came just days after two other fatal accidents killed seven and 15 people in a month that had already seen nearly 160 traffic fatalities. 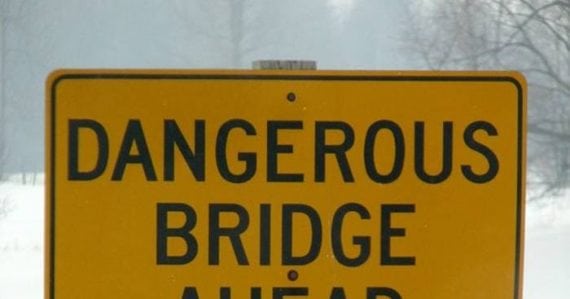 The report says the so-called medicine man first visited the area under the bridge, where he allegedly dug up – or possible found in holes – at least one and possibly more strange creatures which he then brought to the Kamukuywa market a few kilometers away. Photographs show someone – most likely the witch doctor – holding something animal-like in the air in a large crowd of people. The report says the man claimed the creatures were responsible for the accidents and recited prayers at the market, where many were saying the bridge was cursed by a “black spot” – a possible reference to Robert Louis Stevenson’s novel, Treasure Island, in which pirates on trial who are found guilty receive a card with a black spot on one side and a message on the other about their doom.

The photographs (seen here) are dark and not sharp, so it’s difficult to determine what the man is holding. It looks like it could be a decomposing dead animal – the medicine man claimed there were dead cows and sheep in other holes. Before you discount this as just another strange tribal custom, consider how many people believe mangy dogs are Chupacabra and hairless bears are aliens.

Those who don’t follow the witch doctor blame different curses – the curse of negligence by government authorities in repairing decrepit roads; the curse of local police who don’t enforce traffic laws; the curse of unscrupulous bus and taxi drivers who overload their vehicles; and the curse of alcohol imbibed at December holiday parties before driving.

Will the witch doctor and his mysterious creature stop the fatal accidents on the Kamukuywa Bridge and other Kenyan roads? Probably not. Will they draw attention to the real problems facing Kenyans on the road? They already have. Will things change? That depends on how many more creatures the witch doctor can dig up and whether the story gets made into a movie.