A Strange Creature and a Stranger Name!

Practically everyone has heard of Bigfoot and Mothman. Along with the likes of the Loch Ness Monster and the Abominable Snowman, they are two of the world’s most famous monsters. Or, cryptids, as some prefer. But, what do you get when you combine the aforementioned Bigfoot and Mothman into one monstrous thing? Well, what you get is Batsquatch: a terrifying, malevolent, hair-covered humanoid that sports a pair of huge, gargoyle-like wings.

It was a diabolical beast encountered by a young man on Saturday, April 16, 1994. The location was southeast of Buckley, Washington State, and with Mount Rainier in the background. Interestingly, Mount Rainier has another strange and now-famous aerial mystery attached to it: it was over the mountain, on June 24, 1947, that a pilot named Kenneth Arnold encountered a squadron of strange, flying vehicles that, when the media got hold of the story, became famously known as flying saucers. Meanwhile, however, back to 1994.

The man who became the unfortunate witness to the terrible beast was Brian Canfield. At the time in question he was driving his truck to Camp One, a settlement in the area, which is situated near Lake Kapowsin. All was normal until Canfield’s headlights began to fade. That was bad enough. But, in mere moments, his engine completely quit and his vehicle silently coasted to a stop at the side of the road. All thoughts of what he should do, on a lonely stretch of Washington State road, went totally out of the window when an infernal monstrosity loomed into view.

Canfield could only look on, terror-stricken, as a large, dark-colored humanoid descended from the black skies. It did so in a curious semi-gliding, semi-flying fashion, finally coming to rest right in front of his vehicle. Canfield was unable to move, such was his level of terror. All he could do was grip the steering wheel and stare in stark terror at the beast before him.

It was a shocking sight, to say the least. The winged, hair-covered monster was around nine feet in height and, as Canfield could now see, those wings spanned the entire road. It was at this point, despite his terror, that Canfield finally got a good look at the creature. Its fur was dark blue. Its eyes shone yellow. And its white fangs protruded menacingly from its werewolf-like face. For at least a couple of minutes, both man and monster confronted each other, neither making any kind of move. That is, until the creature, without warning, flapped its wings powerfully and violently and took to the skies.

Maybe demonstrating the creature’s supernatural powers, when the beast vanished Canfield’s vehicle returned to normal and both its headlights and engine worked perfectly. Canfield raced back to the home he shared with his parents, charged into the house, and told his astounding story of what happened. Canfield’s father, clearly realizing this was no prank, decided that the best thing they could do would be to get back out there and try and figure things out – as in right now.

Perhaps luckily for both of them, Batsquatch – an undeniably memorable name, which was coined by one of Canfield’s friends – was nowhere to be seen. And, so far as can be determined, it has never been seen again. Unless, that is, you know better. 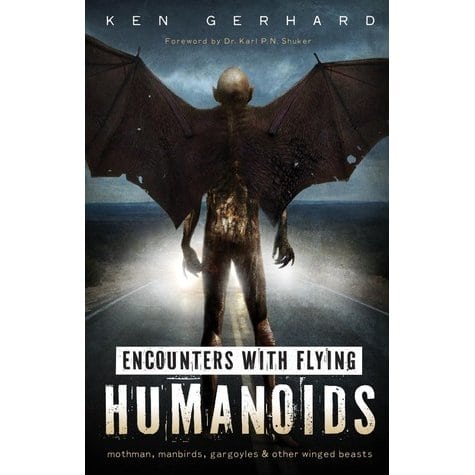 Rogue cases like this one are incredibly difficult to gauge. Why? Simple: we're talking about flying humanoids! Such weird reports surface from time to time, as Ken Gerhard made clear in his excellent book, Encounters with Flying Humanoids. Certainly, Mothman is the most famous of all. But there are plenty of others: the Houston Batman, the Owlman, the flying woman of Da Nang, and many more. Flesh and blood animals of an unknown kind? Paranormal entities? Or a strange and sinister combination of both? The jury is still very much out.