If the road to hell is paved with good intentions, do the gates of hell smell like them? According to the ancient Romans, they didn’t, but that didn’t explain why the so-called Gates of Hell in the ancient city of Hierapolis in modern-day Turkey seemed to kill any living thing that got too close to them … except castrated priests. Now, archeologists researching the “gates” have discovered the real reason why ball-bearing bulls died but humans without them “miraculously” didn’t.

The site is called a Ploutonion (or Plutonium) because it was a place dedicated to the Greek god Pluto (or Hades), the ruler of the underworld. The site was discovered in 1965 but had been written about nearly 2000 years before by the Greek historian Strabo and the Roman author Pliny the Elder. Strabo wrote of attending religious ceremonies at the small cave opening into the Plutonium and it wasn’t a pleasant sight.

“Bulls that are led into it fall and are dragged out dead; and I threw in sparrows and they immediately breathed their last and fell.”

What a nice guy. Strabo, like everyone else, was amazed that the eunuch priests who led the animals into the grotto were unharmed by what he described as a thick vapor that clouded the gate. To reinforce their “miracle,” the eunuch priests sold birds to visitors to toss to their deaths (that’s didn’t make it right for you, Strabo … you should have known better). The priests also received fees for answering questions in the name of Pluto and reportedly made a nice income until the Christians arrived and shut down the operation.

The first archeologists to rediscover Plutonium where quick to also discover the reason for all the dead bulls and birds – CO2. Hierapolis was built on a deep fissure that emits a visible mist of volcanic carbon dioxide (which also heats the thermal pools) thick enough to quickly killed the birds and bulls. But what about the eunuchs? Did castration make them CO2 resistant as Strabo believed?

A new study of the gases solved the miracle. As explained in the journal Archaeological and Anthropological Sciences, a team led by volcano biologist Hardy Pfanz of the University of Duisburg-Essen in Germany measured the amount of CO2 in the air at different times of the day. They found that CO2 was highest in concentration at dawn and dusk but also lowest in actual height at those times. When the sun got higher, the gas dissipated. But at dawn, the air nearest the cave floor (up to 40 cm or just 15 inches) was at least 35% CO2 – enough to kill birds, animals and people in seconds to minutes. 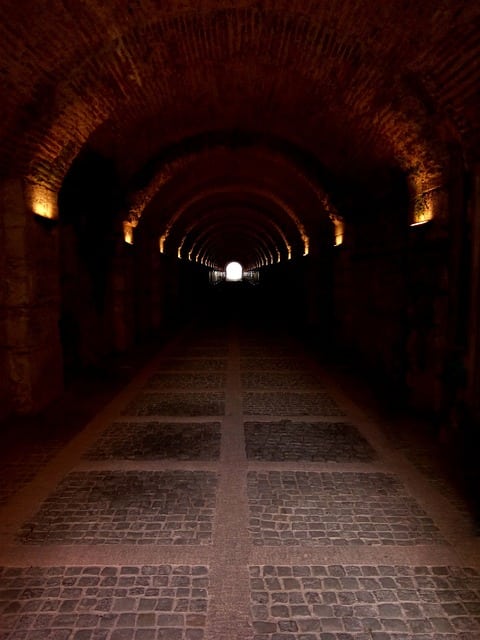 Pfanz believes the castrated priests knew this (unfortunately, probably as the result of losing a few short ones) because records show they held their ceremonies in the morning and evening hours, standing above the animals – perhaps even on stones or steps. To add to the drama, they blamed the whole thing on Kerberos or Cerberus, the three-headed hound of Hades who guarded the gates and prevented the dead from leaving.

“They … knew that the deadly breath of [the mythical hellhound] Kerberos only reached a certain maximum height.”

And you think YOUR dog has bad breath. Strabo also wrote about other local ploutonions with similar properties and one at Lake Avernus in Italy whose gases were known to knock birds out of the sky. Pfanz believes these were the result of similar volcanic fissures leaking CO2 and other deadly gases. The real question is … did the castrated priests share the miraculous money-making secret with each other?

The Mysteries of the Slenderman