Belzoni’s Scimitar, and Other “Anomalous” Iron Objects from Ancient Egypt

Throughout the 19th century, the Italian explorer and amateur archaeologist Giovanni Belzoni traveled extensively amidst the temples, tombs, and pyramids of Egypt. His exploits, which famously included the removal of the bust of Ramesses II and its shipment to England, rank him among the most well known early explorers and adventurers to study ancient Egypt and its antiquities.

While the colossal bust of "The Young Memnon" stands out among Belzoni's achievements, there were other discoveries he made of lesser renown, which are no less compelling. Specifically among these had been an unusual sword discovered by Belzoni near one of the Sphinxes at Karnak, which appeared to be crafted of a material that was uncommon in Egypt at the time: iron.

It has long been maintained that the ancient Egyptians had likely been restricted to use of copper in their metal works during the period in which the pyramids were constructed. Plenty exists in the archaeological record to support this, ranging from copper beads and pins to other items which can be reliably dated back to 4,000 B.C.

However, there is a curious passage that appeared in the writing of a W.T. Haydon in 1891, which noted iron tools discovered at two ancient Egyptian sites, one of which had been the peculiar blade unearthed by Belzoni.

According to Hayden, writing for English Mechanic in 1891:

It would be interesting to have upon record the instances of iron having been found in Egypt. From beneath one of the sphinxes at Karnak, Belzoni secured a scimitar-life blade, and from between the stones of the Great Pyramid a wedge-like piece of iron was rescued.

Another reference to this unusual pair of iron objects appeared four years later in the 1885 edition of The Journal of the Anthropological Institute of Great Britain and Ireland, Volume XIV, in F. G. Hilton Price's "Notes upon some Ancient Egyptian Implements," where he wrote of "a curved scimitar-like blade discovered by Belzoni beneath one of the sphinxes at Karnak, and now in the British Museum. Its date is about 600 B.c. A wedge of iron appears, however, to have been found between the stones of the Great Pyramid."

Price goes on at length about the debate over iron and its use by the ancient Egyptians:

As to the succession of the two metals, bronze and iron, among the ancient Egyptians, there is considerable diversity of opinion among those who have studied the subject. Sir Gardner Wilkinson, judging mainly from pictorial representations, thinks that the Egyptians of the early Pharaonic age were acquainted with the use of iron, and accounts for the extreme rarity of actual examples by the rapid decomposition of the metal in the nitrous soil of Egypt. M. Chabas, the author of a valuable and interesting work upon primitive history, mainly as exhibited by Egyptian monuments, believes that the people of Egypt were acquainted with the use of iron from the dawn of their historic period, and upwards of 3,000 years B.C. made use of it for all the purposes to which we now apply it, and even prescribed its oxide as a medicinal preparation. M. Mariette, on the contrary, whose personal exploration entitles his opinion to great weight, is of opinion that the early Egyptians never really made use of iron, and seems to think that from some mythological cause that metal was regarded as the bones of Typhon and was the object of a certain repugnance.

In another instance, Price notes "the discovery of an adze with an iron blade and a handle of bone or ivory," suggesting that "There is not much doubt that iron was rare in Egypt, in pre-Roman times." However, Price further conceded that "From whatever cause, the discovery of iron or steel instruments among Egyptian antiquities is of extremely rare occurrence, and there are hardly any to which a date can be assigned with any approach to certainty." 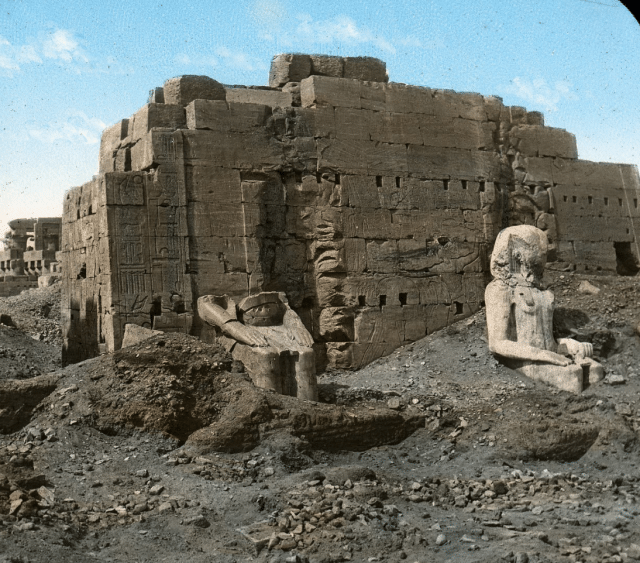 Such "anomalous" discoveries involving iron have long been offered as proof that smelting processes were in use far earlier than once believed. However, as I noted a few months ago here at Mysterious Universe, the most recent study which sought to tackle this mystery, appearing in an article last year titled, “Bronze Age iron: Meteoritic or not? A chemical strategy”, found that chemical analysis of iron samples from the Bronze Age were, without question, of meteoritic origin. This seems to upend the notion of “precocious smelting" that might have occurred during the Bronze Age.

As for the mention of the unusual iron wedge in the excerpts above (this item was discovered by Howard Vyse and his team in 1837), perhaps this item should be afforded new attention since it's seemingly "out of place" presence between two blocks in the southern ai shaft of the King's Chamber might not be all that "anomalous" after all.

Indeed, it may be that this unusual iron object, as well as Belzoni's iron "scimitar" recovered at Karnak, can be better understood today with the help of modern science.

Kidnapped by a Monster: True or False?