Recently I wrote here at Mysterious Universe of various mysterious and mystical plants and trees that have been reported throughout the ages, but there are so many that I figured I would follow up with a few more. The interesting aspects of these cases is just how old some of the reports are, with no new sightings or accounts to come in. How could this be and what does it mean? Were these the fictionalized rants of explorers misidentifying things or news publications looking to fill a slow news day, or is there something more to these accounts? Whatever the case may be, here are a selection of rather bizarre trees with very exceptional and peculiar qualities which are said to have existed, but which have become lost to time.

One very strange tree is the “Luminous Tree,” which was written of in an account in the Theosophist in 1885, in which it is claimed the tree existed in a gulch near some hot springs near Tuscarora, in the United States. The mysterious tree was said to resemble a “barberry-tree” and to emit a glowing light from its branches and leaves at night to brilliantly illuminate the whole area around it. The article said of this strange tree:

It is about six or seven feet in height, with a trunk which, at its base, is three times the size of a man’s wrist. It has innumerable branches and twigs and resembles somewhat the barberry-tree. Its foliage at certain seasons of the year is so luminous that it can be plainly distinguished in the darkest night for a distance of more than a mile, while in its immediate vicinity it emits sufficient light to enable a person to read the finest print. Its foliage is extremely rank, and its leaves resemble somewhat, in size, shape, and colour, those of the aromatic bay-tree of California. The luminous property is evidently parasitic, and consists of a sort of gummy substance, which, upon being transferred by rubbing to a person’s hand, imparts to it the same apparently phosphorescent light, while that on the leaf entirely disappears. 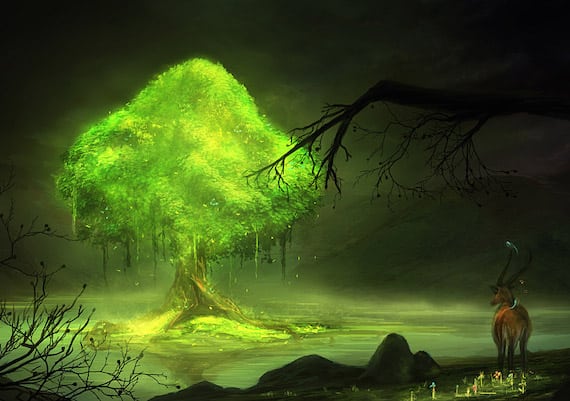 One wonders just what this “gummy substance” was or what its purpose might have been. Was this some sort of symbiotic relationship between a bioluminescent organism and the tree, a new species, or what? Does it still exist somewhere? It is hard to say for sure, but one cannot deny that a grove of these fascinating luminescent trees twinkling like stars in the night would be truly a sight to see. In the January 20, 1943 edition of the Singleton Argus newspaper of New South Wales there was a report of a tree which could produce strange, anomalous sounds. The tree was reportedly from Nubia, in Africa, and was found along the shores of the Nile River near the West coast of Africa. This tree was reported to issue forth a sound like a flute or whistle when the wind blew, and the article would say of this:

From it, when it is swayed by the ind, issue strange sounds like the notes of a flute, fife, or whistle. The whistling tree is regarded with superstitious terror by the natives.

To be fair, the article tries to explain away the phenomenon as merely the work of insects within the tree, which leaves holes in the trunk that supposedly funnel wind through to produce the sounds. Is this what was going on here or is it something else? If it was insects, then why only these particular trees in this one area? Who knows? Some mysterious trees seem to be a bit more ominous and foul-tempered. A curious account appeared from Australia in 1890, in several publications, where there was reported to grow a sinister tree simply called the “Angry Tree,” or in other sources the “Sleeping Tree.” The tree reportedly grew up to a maximum height of around 80 feet, and was said to be a species of acacia. This particular tree was apparently known for its rather active and some might even say violent reaction to being manhandled, with one article in March edition of the Petersburg Times mentioning one such tree being transplanted to the USA, saying:

One of these curious plants was brought from Australia and set out in Virginia, Nevada, where it has been seen by many persons. When the sun sets the leaves fold up, and the tender twigs coil tightly, like a little pig’s tail. If the shoots are handled the leaves rustle and move uneasily for a time, in a state of mild commotion for a minute or more. If this queer plant is removed from one pot to another, it seems angry, and the leaves stand out in all directions like quills on a porcupine, and the whole tree is in a quiver. A most pungent and sickening odour, said to resemble that given off by rattle-snakes when annoyed, fills the air, and it is only after an hour or so that the leaves fold in their natural way. It would probably not given up the fight even then had it not been that its time for going to roost had arrived. 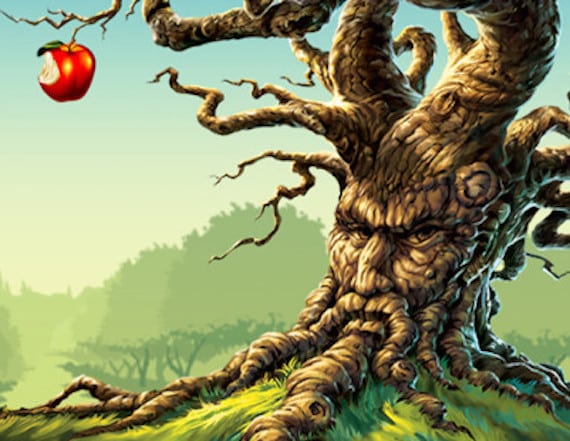 What was this bizarre tree? Was it real? We will probably never know. In the March 30, 1901 edition of The Muswellbrook Chronicle there was a report of the menacing “Snake Tree” from Mexico. The mysterious tree was claimed to cover a large area and to stand around 20 feet high, and its most shocking feature is that it seems to have been very predatory in nature, supposedly lying in wait for the opportunity to lash out to grab any unwary nearby animals with its tendrils and suck them dry of blood. The description in the article says:

It has a thick, gnarled trunk, and a large number of slimy, snake-like branches, entirely devoid of foliage, which are constantly writhing and stretching in all directions. This eccentric motion is accounted for by the fact that the tree actually subsists upon the blood of birds and small animals, seizing and gorging itself with any live thing that may come within the reach of its tenacious limbs. Each of these limbs is entirely covered with tiny suckers, resembling those of the octopus, and whenever a medium-sized bird or animal comes into contact with these treacherous boughs, it is immediately drawn in and surrounded by hundreds of these small but powerful tentacles, and held fast until its blood is sucked dry.

A similarly bad-tempered tree was said to inhabit the badlands of the U.S. state of Arizona in the 19th century. In 1894 a report surfaced of a coniferous tree standing around 25-feet high that was said to be covered in a myriad of quills and spines. When at rest these spines lay against the bark in a non-threatening manner and it would exude a sweet, pleasant smell, but if the tree was approached or agitated in any way these quills would scarily shoot to attention and the odor would become that of rancid, rotting meat. Some reports even spoke of the tree emitting an intimidating hissing noise to accompany this aggressive display. One Col. Brace Dion would say of the so-called “Porcupine Tree” thus:

There are more queer things to the acre in Arizona than in any other part of this wide land, and according to my idea, and I know pretty near what queer things are, the queerest thing in all Arizona is the tree that has a temper worse than a blonde comic opera prima donna’s, and gets its dander up with just as small a provocation. Some folks out at Houck’s Tank call this tree the porcupine tree, and some say its right name is skunk tree. I call it the holy terror tree. But no matter what you call it, it is a queer job of nature, and Arizona claims it as her own. 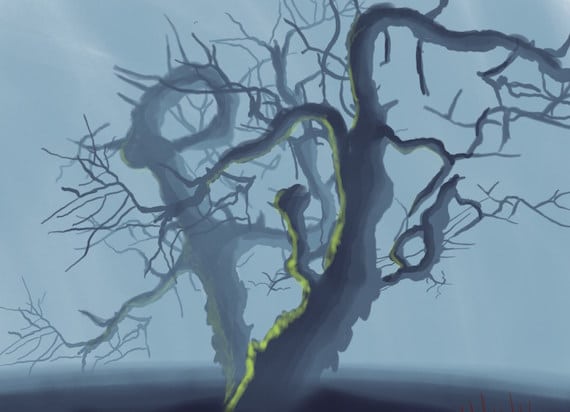 Perhaps not as outwardly fierce but nevertheless just as formidable was a tree written of by a German expedition to New Guinea in 1885, where they came across a tree with the apparent ability to shock those who came too close. At a remote area at an altitude of around 5,000 feet the expedition, which was led by a Lieutenant von Immer Gassende, reportedly came across a clearing littered with the remains of birds and small animals and which was devoid of any other vegetation. The only thing that seemed to grow here was a peculiar type of tree the likes of which none of them had ever seen before, and when a careless member of the party chopped at one with an axe it purportedly sent him careening backwards from a massive electric shock. Gassende would say of the tree:

Every branch and every twig of the tree, which I can assure you we treated with much respect, presented similar ridges and cores, with the addition of a thicker central one, and I quickly proved that the current circulated through the entire system. How it is kept up, no one at present can tell; but there it is. I am not able to say what the intensity or the quantity of the current might have been, but it was enough to knock you down in a very unpleasant way. We made a lot more experiments on the tree, and would have cut it down but it seemed like a dangerous job to undertake. We saw a great many more of the same kind farther on, quite a forest, in fact.

The expedition would later be forced to head back due to sickness, but Gassende speculated that the dead animals had been the doing of these mysterious trees, whether out of aggressiveness or pure defense. He also claimed that samples of the curious trees had been taken, including pieces of the wood, core, and some seeds, but it is unknown what became of these and they, as well as the electric trees of New Guinea, have become lost to history. Did such a thing ever exist? Is it possible for a tree to evolve such a defense mechanism? The answer may lie out there in some remote area of New Guinea. 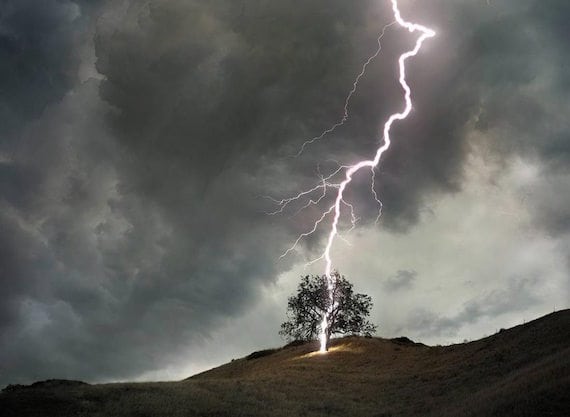 Such reports are to be found in abundance in old publications and explorer's journal entries, but nothing seems to have ever come them. We are left to wonder just what these curiosities were ad how they worked. There can be no doubt that these would be very interesting additions to the field of botany, yet with these reports the phenomena just seems to die out, to fade into the mists of time. Are these potentially amazing new discoveries still out there, or have they gone as extinct as reports of their existence? Did they ever even really exist at all? With such reports faded from memory and merely existing as long lost news reports, we are left to merely wonder.