In the paranormal business, the cure for a slow news day is to see what’s cooking in Peru. Last week, we had the truck driver plowing his vehicle over the ancient Nazca lines, destroying portions of these famous and unexplained geoglyphs in the name of avoiding to pay a toll. It’s been a while since we heard anything about the three-fingered mummies but there’s nothing new to reports. Fortunately, the elongated skulls came to the rescue!

“This could re-write history as we know it.”

Yes, it was another “This changes everything” moment over the weekend when the Elongated Skulls Symposium was held in Los Angeles. Hosted by author, lecturer and film maker L.A. Marzulli, it brought together a variety of speakers on the subject of the Paracas skulls, including videographer Richard Shaw, forensic expert Chase Kloetske, archaeologist Mondo Gonzales, 3D forensic artist Marcia K. Moore, anthropologist Rick Woodward, medical doctor Dr. Michael Alday, and chiropractor Dr. Malcolm Warren. However, the big news on DNA testing of the skulls came from Marzulli and Brien Forester of Hidden Inca Tours.

If those last two names sound familiar, it’s probably because they had a similar “this changes everything!” moment in 2016 when DNA tests were reportedly conducted on the Paracas elongated skulls of Peru. At that time, they revealed that the test results showed the skulls were not from Peru but were not alien either. The humans were believed to have come from Europe and Mesopotamia, especially Syria. That was interesting and certainly added a twist to which humans first arrived in the Americas, but not a game-changer. Was the Elongated Skulls Symposium?

The website megalithicmarvels.com gave a synopsis of the talk by Brien Forester.

“The DNA results actually were incredibly complicated… It’s gonna take me some time to actually figure out what the results mean. What it does show for sure is that the Paracas elongated skull people were not 100% Native American. They were a mix or even you could say, in some ways, a hybrid of different people.”

Wait a minute … this sounds familiar. That’s when Forester adds a new twist.

“It appears that the largest elongated skulls on the planet have been found, “A” in Paracas, Peru and “B” in the Caucasus area in between the Black Sea and the Caspian Sea… so my theory is that there was a sub-species of human which we are going to be eventually calling Homo-Sapiens-Sapiens-Paracas, and they were living in the area in between the Caspian and Black Sea.”

“They were invaded by somebody… and so they were forced to flee.”

Forester lays out a path for this sub-species to sail from the Persian Gulf to Peru. That’s where he believes, and says some of the other speakers agree, that these naturally long-skulled people settled and flourished for a time.

“ … because of the abnormalities found with some of the Elongated Skulls from the Chongos cemetery in Peru they have no other choice but to state that some of these ancient Paracas were a sub-species of humanity… it had to be genetic, they had to be born with these abnormalities. They had dark red hair… the royal Paracas were the ones with elongated heads, not the common people… the royal family of the Paracas, they lived in subterranean underground houses and I think the reason for that is that they had light-colored skin, probably sensitive eyes because of the extreme sunshine…” 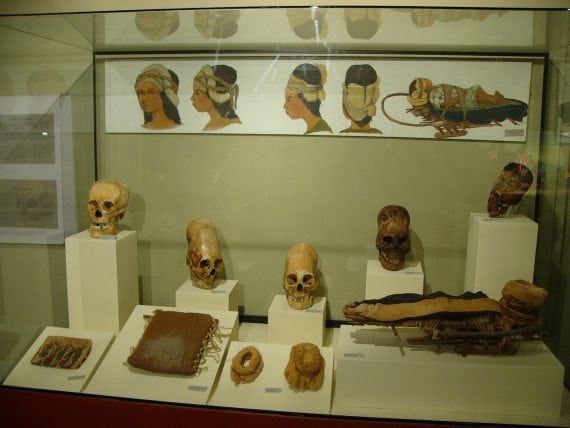 So, Forester believes the long skulls are a genetic abnormality, not the result of binding, and those with them were regarded as leaders and superiors. The key word is “believes,” not proves. This certainly reinforces the idea that the genetic makeup of Native South Americans is truly a varied mix. It also continues to disappoint those who want to believe the elongated skull beings are aliens. However, it doesn’t prove how the Paracas could be a separate sub-species while all other elongated skull cultures are not.

Let’s hope the next ‘this changes everything’ DNA tests come during another slow news week.

The Road To Strange: A New UFO Book Reviewed