Night of the Living Dead Human-Animals

Elliott O’ Donnell was an acclaimed authority on ghosts and life after death, and who penned dozens of books on supernatural phenomena. Born in 1872, he continued writing until his death in 1965, at the age of ninety-three. O’Donnell also had a deep interest in reports of weird creatures, as the following 19th century account demonstrates: “Henry Spicer, in his Strange Things Amongst Us, tells the story of a Captain Morgan, an honorable and vivacious gentleman, who, arriving in London in 1841, puts up for the night in a large, old-fashioned hotel. The room in which he slept was full of heavy, antique furniture, reminiscent of the days of King George I, one of the worst periods in modern English history for crime. Despite, however, his grimly suggestive surroundings, Captain Morgan quickly got into bed and was soon asleep. He was abruptly awakened by the sound of flapping, and, on looking up, he saw a huge black bird with outstretched wings and fiery red eyes perched on the rail at the foot of the four-poster bed."

O'Donnell continued: “The creature flew at him and endeavored to peck his eyes. Captain Morgan resisted, and after a desperate struggle succeeded in driving it to a sofa in the corner of the room, where it settled down and regarded him with great fear in its eyes. Determined to destroy it, he flung himself on the top of it, when, to his surprise and terror, it immediately crumbled into nothingness. He left the house early next morning, convinced that what he had seen was a ghost, but Mr. Spicer offers no explanation as to how one should classify the phenomenon."

He also had the following to say: “It may have been the earth-bound spirit of the criminal or viciously inclined person who had once lived there, or it may have been the phantom of an actual bird. Either alternative is feasible. I have heard there is an old house near Poole, in Dorset, and another in Essex, which were formerly haunted by spectral birds, and that as late as 1860 the phantasm of a bird, many times the size of a raven, was so frequently seen by the inmates of a house in Dean Street, Soho, that they eventually grew quite accustomed to it. But bird hauntings are not confined to houses, and are far more often to be met with out of doors; indeed there are very few woods, and moors, and commons that are not subjected to them. I have constantly seen the spirits of all manner of birds in the parks in Dublin and London. Greenwich Park, in particular, is full of them.”

Take note of O'Donnell's aforementioned words, suggesting that the supernatural bird "...may have been the earth-bound spirit of the criminal or viciously inclined person [italics mine] who had once lived there..." O'Donnell was someone who firmly believed that the human dead returned to our plane of existence in the form of malevolent, monstrous beasts. In 1912, he wrote a book titled Werewolves. In its pages, O'Donnell stated: “It is an old belief that the souls of cataleptic and epileptic people, during the body’s unconsciousness, adjourned temporarily to animals, and it is therefore only in keeping with such a view to suggest that on the deaths of such people their spirits take permanently the form of animals. This would account for the fact that places where cataleptics and idiots have died are often haunted by semi and by wholly animal types of phantasms.” 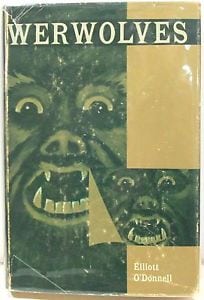 Of a ghostly bear seen in and around the Tower of London, England in the 19th century, O'Donnell said: “The phenomenon of the big bear, provided again it was really objective, may have been the phantasm of some prehistoric creature whose bones lie interred beneath the Tower; for we know the Valley of the Thames was infested with giant reptiles and quadrupeds of all kinds (I incline to this theory); or it may have been a Vice-Elemental, or – the phantasm of a human being who lived a purely animal life [italics mine], and whose spirit would naturally take the form most closely resembling it.”

A careful study of many of O'Donnell's books shows that this issue of the human dead returning to our plane of existence as horrific beasts played on his mind a great deal.

Mysterious Cases of People Who Teleported Out of Prison