To be original or not to be original, that is the question that has been asked of William Shakespeare’s plays for centuries. There have been rumors of Will plagiarizing passages or even whole plays but, while the Bard’s writings have been preserved, those he may have pilfered from have been lost … or perhaps conveniently destroyed by a Shakespearean conspiracy. A new book reveals that one of those missing 16th century documents has been found and passed through 21st century plagiarism software and the results may put the origin of at least 11 of Shakespeare’s plays in doubt. Why couldn’t this have happened before you had to study them in school?

Before you get ready to sue your high school English teacher for the ‘F’ that kept you out of community college, Dennis McCarthy and June Schlueter, the authors of the upcoming book, “A Brief Discourse of Rebellion and Rebels by George North: A Newly Uncovered Manuscript Source for Shakespeare’s Plays,” warn that they’re not saying the Bard was a word thief – rather, he was “inspired” after reading the manuscript of George North. Yeah, right. 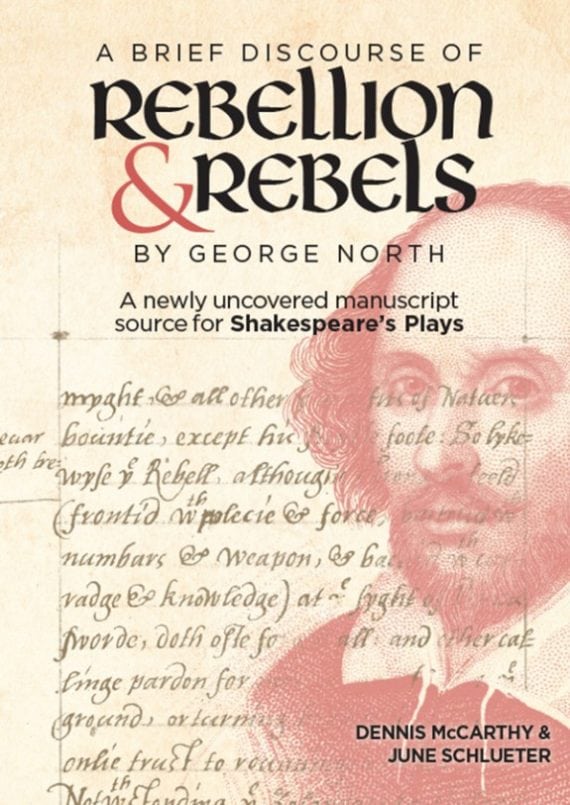 McCarthy saw a brief mention of North’s little-known work in a 1927 catalogue of rare books and he and Schlueter scoured dusty storage rooms before finding it the British Library – a monumental task since it’s the national library of the UK and the second largest collection of catalogued items (over 150 million) in the world (after the US Library of Congress). North wrote it in 1576 – young Will was 12 at the time, four years before he married Anne Hathaway and about 16 years before his plays started being performed.

In his book, McCarthy describes using WCopyfind, an open-source plagiarism program, to find common words and phrases in “Discourse” and Shakespeare’s plays. It didn’t take long for it to pick up repeated sequences of rarely-used (at the time) words from North’s manuscript that matched those used in the same order by Shakespeare, especially “proportion,” “glass,” “feature,” “fair,” “deformed,” “world,” “shadow” and “nature.” Is this a big deal? McCarthy thought so. In an interview with The New York Times, he said:

“People don’t realize how rare these words actually are. And he keeps hitting word after word. It’s like a lottery ticket. It’s easy to get one number out of six, but not to get every number.”

For those who have not read Shakespeare nor attended a play in a while, the software found these and other matching words, sequences and phrases in over 20 Shakespearean passages, including the opening soliloquy in Richard III, Macbeth’s comparison of dog breeds to men, the Fool’s prophecy in King Lear, and Jack Cade’s fatal fight in Henry VI. All told, matches to North were found in 11 of the Bard’s works. To make sure that George and Will weren’t both stealing from yet another writer, McCarthy used the software to search the database Early English Books Online, which contains 17 million pages from nearly everything published in English between 1473 and 1700 and found no significant matches.

Scholars are quick to point out that it’s common knowledge (and was accepted practice in his time) that Shakespeare borrowed plots, ideas, characters and even passages from others, but also changed them extensively. However, no source seems to be as prevalent and proven as North.

Is Dennis McCarthy a frustrated English student getting his revenge? More likely, he’s a computer geek and an author himself who reportedly spends 12 hours a day on his PC searching for signs of plagiarism and has plans for four more books on Shakespeare and on his own research techniques.

If he ever starts looking at speeches, some politicians could be in big trouble.