Robots Will Either Kill, Enslave or Save Humans

Should we fear robots or embrace them?

That question gets more difficult to answer every day as new announcements are released about robotic achievements and advances in artificial intelligence. Just in the past week we’ve seen a realistic robotic dog that can open a door and fight off a human who tries to stop it, a realistic walking humanoid robot that puts out fires, a call to equip robots with kill switches, a warning that robots will use humans as guinea pigs and a call to be cautious rather than dystopic. Which one is it?

Boston Dynamics, a world leader in robotics, released two videos of one of its latest inventions – a four-legged SpotMini robot dog that can open a door with its ‘mouth’. The popular first video shows how cute the robotic pet looks as it grabs the knob without the usual canine slobber, while the second, which is called “Testing Robustness,” shows the pit bull wannabe fighting off a human who tries to stop it. Here’s a telling statement from the second video’s commentary:

“The ability to tolerate and respond automatically to disturbances like these improves successful operation of the robot. (Note: This testing does not irritate or harm the robot.)”

What about irritating or harming humans?

Next, the Italian Institute of Technology’s (IIT) released a video of its WALK-MAN humanoid robot performing a simulated disaster rescue operation during an industrial plant disaster where it walks into a room, turns off a leaking gas valve, clears out debris and operates a fire extinguisher. While not fully autonomous (yet), all it will take is for one WALK-MAN to rescue a baby in a fire to move humans to embrace it like the Sony Walkman of the 80s and 90s (which ultimately took control of how humans listen to music … coincidence?).

Do we need to put a ‘kill switch’ or ‘kill chip’ in the brains of robots to stop them before their AI turns on their human overlords (if they even exist anymore) and kills their makers? Futurist Dr. Michio Kaku said in a Reddit Q/A session that he thinks it’s imperative to do this … and here’s why.

“I think we should chip their brain to shut them off if they have murderous thoughts.”

Murderous thoughts in robots! The plot of many sci-fi movies, which Dr. Kaku doesn’t see happening until 2100. But what about in the meantime? Fellow futurologist Dr. Ian Pearson has his own dystopian view of the future. He told The Sun he believes robots will act like rogue states and, as they gain more intelligence than humans, turn us into their own enslaved guinea pigs.

“We'll have trained it to be like us, trained it to feel emotions like us, but it won't be like us. It will be a bit like aliens off Star Trek—smarter and more calculated in its actions. It will be insensitive to humans, viewing us as barbaric. So when it decides to carry out its own experiments, with viruses that it's created, it will treat us like guinea pigs.” 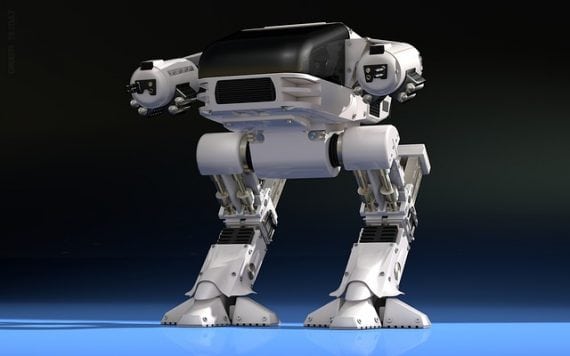 Guinea pigs of robots! Another great sci-fi plot that seems awfully close to reality – far sooner than 2100. Is there any hope for humans against robots and their murderous, rogue-state AI brains?

“What we are faced with, this list suggests, is not an existential threat to humanity but sharper forms of the problems with which we are already grappling. AI should be seen not in terms of super-intelligent machines but as clever bits of software that, depending on the humans wielding them, can be used either for good or ill.”

That’s from the new report, “The Malicious Use of Artificial Intelligence: Forecasting, Prevention, and Mitigation,” which says we should worry less about the robots themselves and more about humans panicking over the advance of said robots.

Is this a good idea? We humans do tend to panic easily.

Then again, how do we know this report wasn’t written by a robot as the next step in leading us complacently into its guinea pig lair?

Researchers Find Tomb of High Priest of the God of Knowledge