The Shaver Mystery: UFOs, the Hollow Earth, and the Birth of a Science Fiction Sub-Genre

It was 1945, and science fiction writer Ray Palmer was working as the editor of a popular pulp fiction magazine called Amazing Stories. A diminutive fellow with a hunchback, Palmer had suffered a near-crippling accident early in life that broke his spine, and the resulting unsuccessful surgery stunted his growth. Thus, at the age of 35, Palmer had grown to a mere four feet in height.

It was on an afternoon during the year in question that Palmer happened upon an odd letter in the office slush pile. The letter was from a man who claimed he had managed to decipher a secret, coded ancient language, of which evidence could still be discerned from modern writing. Palmer wrote back to the author, a Mr. Richard Sharp Shaver of Pennsylvania, seeking clarification on the unusual matter. This prompted a long, rambling letter from Shaver, who claimed to learn of this, and other mysteries of our world, after psychically overhearing the communications of beings living in extensive caverns below ground.

Shaver was no great writer himself, if this grandiloquent offering was any indication, though Palmer saw potential nonetheless. From it, he began to construct an outline based on Shaver's missive, and shaped it into a decent fantasy story, which eventually saw publication under the title, “I Remember Lemuria.”

Thus, the Shaver Mystery was born.

Initially intended to be read and enjoyed only as fiction, Shaver’s weird ramblings would inspire Palmer and the publishers of Amazing Stories to continue publication of “Shaver Mystery” stories for several years, during which the readership of the magazine reportedly increased by thousands. Throughout the period which saw the publication of stories based on his odd, rambling mythos, Shaver had always maintained that his “communications” with inner-earth dwellers were real and that the stories of cavern systems inhabited by strange beings beneath the Earth were based on fact. 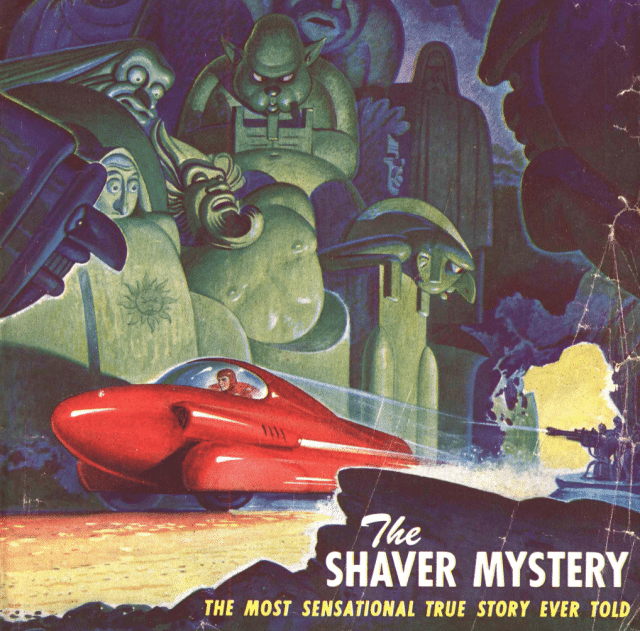 Following the publication of the novella “I Remember Lemuria,” Palmer professed that letters his publication recieved–usually numbering less than fifty or so each month–were now close to 50,000. Equally impressive had been that many of these fan letters detailed strange experiences, expounding on the exploits of these deep-Earth denizens Shaver claimed to have met.

Among the letters Palmer received had been the story of a woman who, claiming to have served as a medical specialist in France during the Second World War, entered the sub-basement of an old building via an elevator. A cavernous opening existed in the lowest portion of the building, and upon her discovery of the entrance to an underground realm, the woman was captured by a group of monstrous creatures. She claimed to have been held prisoner by these beings for an indefinite period, after which she was finally discovered and released by a group of benign, human-like saviors. (An apparent nod toward this story was later featured in the works of science fiction writer Harlan Ellison, who wrote in a short story titled, "The Elevator People" that, "There are five hundred buildings in the United States whose elevators go deeper than the basement." Ellison, however, was a vocal critic of the Shaver Mystery stories and had at one time badgered Palmer about his insistence on publishing them.)

Much like the story above outlines, Shaver categorized these subterranean inhabitants into two different groups: a monstrous, evil group called Deros (meaning “detrimental robots”), and their good-natured counterparts the Teros, who were nearly identical to humans in appearance. 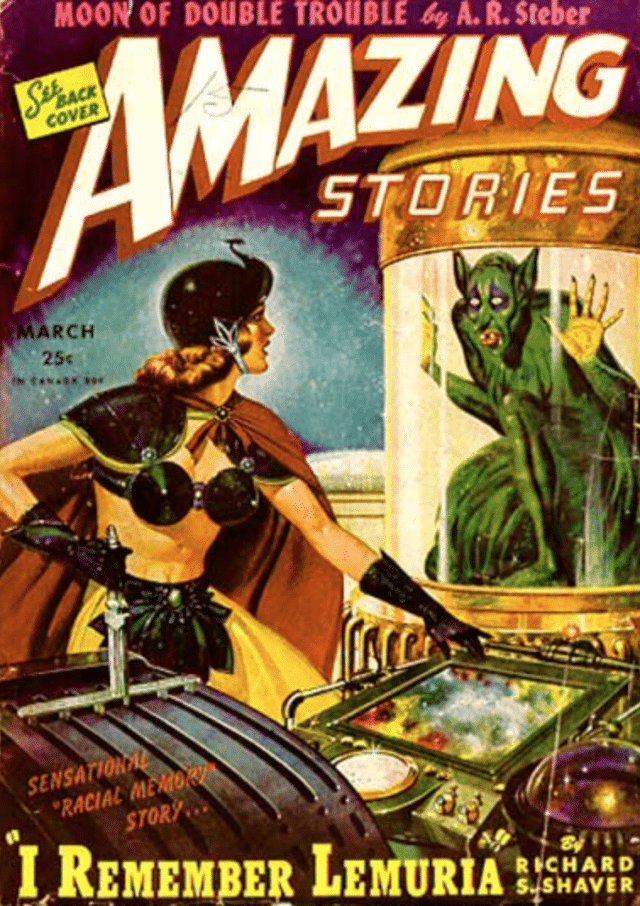 Palmer himself had begun to wonder about the circumstances surrounding all this insanity, and Shaver’s claims that the events related in his letters to Amazing Stories were true. His curiosity finally prompted a visit to Richard Shaver’s home in Pennsylvania. After a late-evening coffee session, Palmer was led upstairs and shown to the spare bedroom, where throughout the evening he claimed, to his astonishment, to hear five individual voices of men, women, children, and even an “old gruff man.” According to Palmer, he was terrified to hear a discussion that pertained to the dismemberment of a human woman someplace four miles away–and presumably four miles down. Discussing the experience with Shaver the following morning, the strange host claimed he had asked the “beings” to “go easy on him (Palmer),” and Palmer, finally growing in his conviction regarding the Shaver Mystery himself, was able to get a night’s sleep uninterrupted.

This would be only one of many strange stories Palmer would recount, and though Richard Shaver’s own sanity would later come into question on many occasions, the prolific interest in his visions of an inner-Earth struggle would continue, inspiring a generation of devotees and researchers that included Timothy Green Beckley, who had known Palmer personally. Of his own discovery of Richard Shaver’s visions of conflict in a subterranean world, he admits being “chilled to the bone,” by the stories as a young reader, saying it was “stuff that nightmares were made of, and I was intrigued just as Ray Palmer had been.”

Palmer’s convictions about Shaver’s ideas would come and go over the years. After leaving Amazing Stories, the former editor was still under contractual obligations that prevented him from launching a competing publication. He did, however, do so anyway under a pseudonym, which led to the appearance of FATE, a magazine which, at the time, was mostly devoted to the burgeoning interest in flying saucers that followed pilot Kenneth Arnold’s observation of a group of objects over Mount Rainier, Washington in 1947.

Initially, Palmer had been convinced that the appearance of flying saucers might prove to be a vindication for Shaver's claims, supposing that the seemingly advanced aircraft might actually belong to the subterranean dwellers discussed in his stories. With the founding of FATE, Palmer hoped in part to be able to get to the bottom of the saucer mystery, but after a few years, he left the operation which continued under the publication of his partner, Curtis Fuller.

Ultimately, what was Palmer to make of Shaver and his stories? Like many, it seemed by the 1970s that he had become disillusioned with Shaver and his claims, even noting in 1971 that during periods Shaver claimed to have lived underground amidst the warring factions of Deros and Teros, that he had instead been hospitalized in a mental institution.

The stories, of course, were purely imaginary, supplemented perhaps by the ramblings of a once disturbed mind; but in their heyday, the stories of Richard Shaver saw a kind of success and popularity that was nearly unrivaled in the science fiction genre.

The Strange, Unknown Apes of Kenya