Three-Fingered Mummy Update: They Were Once Alive

Despite the seemingly endless reports of UFO sightings, ghost encounters, Bigfoot videos, strange hums, falling fish and other paranormal occurrences, there are days when it seems that nothing out of the ordinary is happening (we exclude politics from consideration, unless a UFO is involved). When all other countries or geographical areas fail, Peru always seems to come through. Within the past week, that fine country has provided stories about a truck driver destroying some Nazca lines and a DNA analysis of the mysterious Paracas elongated skulls. The paranormal riches of Peru paid off once again today, with the report that an ongoing investigation of the three-fingered mummies found in a Nazca cave has determined that they were once definitely alive. Muchas gracias, Peru! 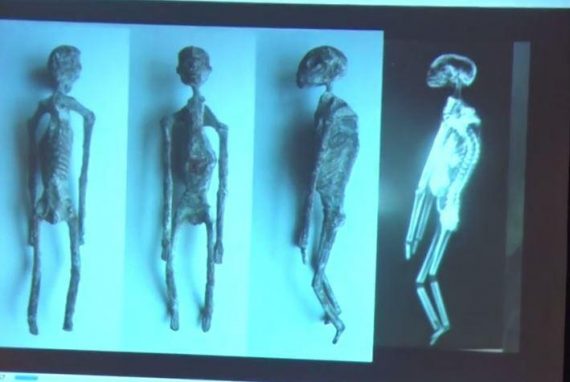 Here’s a quick update. The chalky-covered three-fingered-and-toed, big-headed, small-bodied mummies were allegedly found in a Nazca cave and revealed to the public in 2017 by Gaia.com. Since then, there have reports of one being pregnant, another carrying eggs, the total reaching 20, a guy named Mario taking credit for the discovery, a possible sighting of live ones, DNA tests showing they’re human or human-like and more. Now, a video has surfaced with new insights from a member of the team.

"Each of three small specimens has been analysed and bone density belong to that of a living being. The preservation is amazing, it is really surprising, especially the bone parts of these small creatures. "You see that, the base of the skull has its own characteristics. We can scientifically prove the skull of these creatures have a cranial cavity similar to humans, but they have some strong differences.”

It was reported this week by express.co.uk that radiologist Dr. Raymundo Salas Alfaro, a new name in these three-fingered mummy reports, made those observations after claiming to see CAT scans of the mummies. A video dated October 2017 shows Alfaro discussing the mummies but an English translation was not provided. That’s too bad because, in the express.co.uk account, Alfaro seems to disagree with the DNA report by saying that the skull does not look human. (Did he look at the fingers?)

"Here another image you see the soft tissue - a big surprise about these small creatures. Of course they have existed this is not a fake."

Alfaro then addressed the most famous of the three-fingered mummies – the one the team has named Maria – and said this:

"We are scientifically proving that this is a real body that was once alive."

So Dr. Alfaro seems to be refuting those who claim this is an elaborate and morbid hoax perpetrated by someone who pieced together the mummies from human body parts. However, the evidence he presents is still just the CAT scan and the DNA test. That isn’t enough to convince skeptics, which includes the World Congress on Mummy Studies and the Peruvian government, which doesn’t like foreigners messing with any of its mummies, real or otherwise.

Sorry Maria, Dr. Alfaro and the rest of the three-fingered mummies and researchers. The needle on this case is still stuck between ‘Skeptical’ and ‘Hoax’. However, we’re leaving it open in the likely event there’s another slow paranormal news day.

Bigfoot: Tusked and with Backwards Feet!