Among the various aquatic anomalies reported over the years, including sea monsters, lake monsters, and mermaids, certainly in a class all its own are the various reports of strange amphibious humanoids, typically described as reptilian, frog-like, or fish-like, as if something straight out of The Creature from the Black Lagoon. These outlandish accounts tend to fly off into the extreme fringe of cryptozoology and defy any real efforts to understand or classify them, only adding to the mysteries that the world's waterways hold within their depths. Here is a selection of some of the weirder of such encounters.

Perhaps the most well known of the tales of such beasts is that of what has come to be known as the Loveland Frog, of Loveland, Ohio, in the United States. One of the earliest accounts of this frog-like mystery monster comes from May of 1955, when a businessman was traveling down a remote rural road along the Little Miami River in Clermont County, near the town of Loveland. As the witness approached a bridge at around 3:30 AM, he says that he saw three bipedal frog-like creatures measuring around 3 to 4 feet in height gathered under a bridge. The strange beasts were described as being somewhat reptilian in appearance, with webbed hands and feet, thick leathery skin, and “frog-like heads,” and as having many wrinkles over their bodies, as well as having wide, lipless mouths. One of the mystery beasts then allegedly raised its arm to produce a bar or wand of some sort that was said to emanate sparks and a pungent odor of “alfalfa and almonds,” an odd detail that just sinks the whole thing deeper into the strange. 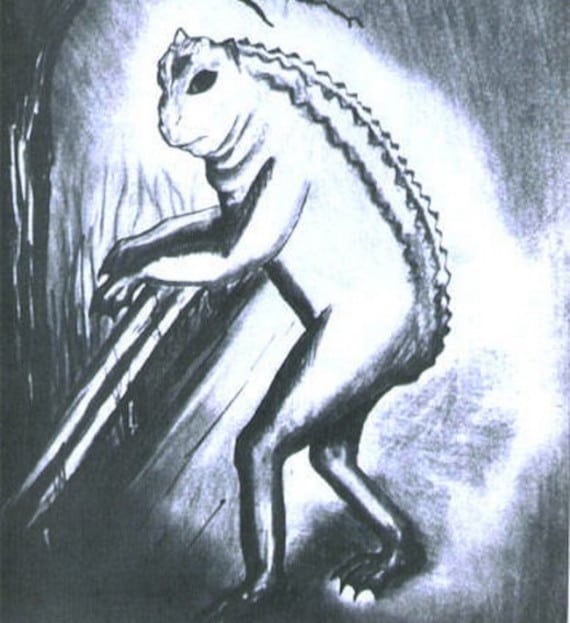 Thus would begin the odyssey of the Loveland Frogmen. In March of 1972 the bizarre frogman would make an appearance again when it was purportedly spotted near Loveland by a Ohio police officer identified as a Ray Shockey as he drove in his cruiser along East Kemper Road, which winds along with the Little Miami River near town. The creature was described as bipedal and around 4 feet tall, with rough, leathery skin, and a head and face like a frog or lizard. The officer explained that he saw it leap over a railway to apparently jump into the Little Miami River. A later examination of the scene turned up strange scratch marks on the handrail the thing had reportedly jumped over, but no other physical evidence of any kind.

Just two weeks after this sighting it was seen yet again, this time by another police officer named Mark Mathews. In this case the creature was spotted lying on a rural road on the outskirts of Loveland. The witness supposedly at first took it to be a dead animal on the road, but as he got out of his cruiser to investigate it allegedly stood up and crouched down on the road before walking over to the guardrail while intently watching the witness. It was described as a frog-like bipedal creature around 4 feet in height, this time with a tail clearly visible, and the startled police officer then took a shot at it with his sidearm but missed as the beast scurried off into the night. In later years Matthews would begin to doubt what he had seen, and started to claim that it must have been some exotic reptile pet that had escaped from its owner, although how this could be confused with an upright walking frog is anyone's guess. It is unclear why he retracted his original report, but an investigation by Weird Ohio in 2001 interviewed a local named Ron Schaffner about the possible reason, and he said thus:

Why, after all these years is Matthew’s debunking the story? I’m not sure. Could be a number of reasons. But both officers told us that it resembled the sketch in 1976. Why would they shows us a composite drawing of this creature back in 1976 and tell us that it looked like the drawing? I lived in Loveland for about five years and the story is still circulating with many variations. Just maybe Matthews is tired of hearing the story and all the variations. 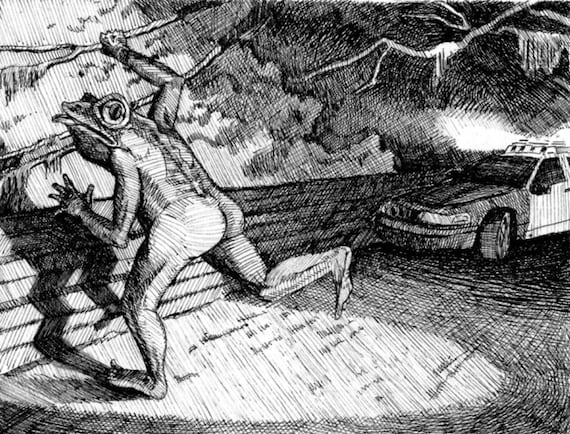 There have been other sporadic sightings over the years of the Loveland Frogman, and as recently as 2016 there was a report that someone had actually filmed the creature. According to WLWT5, witness Sam Jacobs was playing the popular video game “Pokemon Go” along with his girlfriend behind the Beth Adam synagogue on Loveland Madeira Road, in Ohio, when they saw a strange, frog-like creature in the water of the nearby river. Jacobs would describe what happened thus:

We Saw a huge frog near the water. Not in the game, this was an actual giant frog… then the thing stood up and walked on its hind legs. I realize this sounds crazy, but I swear on my grandmother’s grave this is the truth… Not sure if it was a frogman or just a giant frog. Either way, I’ve never seen anything like it.

The couple managed to take a video clip of the alleged creature on their phones, which shows what seems to be something standing in the water with glowing eyes, but it is so indistinct and grainy it is hard to make out just what we are seeing here. It could be the Frogman or it could be a person in a suit. It is very possible that it is a hoax, but the couple are adamant that they actually saw this thing. If the Loveland Frogman was ever real, then what could it possibly be? Is this a cryptid, and alien, or what? It is hard to say.

Another very well-known case of some sort of amphibious beast in the Ohio River seems to describe some sort of fish-man in its waters. In August of 1955, a Mrs. Darwin Johnson claimed that as she had been swimming in the Ohio River near Evansville, Indiana when she was pulled underwater by a reptilian creature of some sort, which grabbed her knees and yanked her under the waves. She was able to kick herself free and get to shore with the help of another woman in the vicinity named Chris Lamble. According to the report there was a green palm print on the victim’s leg which would not fade away for nearly a week. Oddly, a mysterious figure claiming to be with the Army reportedly later approached the two women and discouraged them from telling anyone of the encounter.

Also from the Ohio River are sightings of something strange in October of 1975 at the portion of the river that runs across the northern boundary of Milton, Kentucky. Described in cryptozoologist Loren Coleman’s book Mysterious America, one witness, a Clarence Gable, claimed that there was a massive frog-like creature lurking in the area of his junkyard. The creature was described as having bulging eyes, a forked tongue, and as being a dull white color with black and white stripes. Other witnesses at around the same time would see the same or similar creature around the Ohio River at Trimble County, Kentucky, and say it was some sort of bipedal and amphibious lizard-like beast.

Other “gill-man” sightings covered by Coleman have come in from other areas as well. In March of 1959, witnesses Michael Lane, Wayne Armstrong, and Dennis Patterson sighted a “green-eyed, seven-foot-tall, seemingly armless humanoid” at Charles Mill Lake in Mansfield, Ohio, that left behind tracks like the flippers of scuba divers. This particular entity was seen again in 1963, and a major detail was that it was “luminous and green-eyed.” In November of 1978 a bizarre creature was spotted by a Charles Wetzel in the wilderness along the Santa Ana River near Riverside, California, that was described as being 7 feet tall, covered with scales and having a “protuberant mouth” and eyes that had a fluorescent sheen to them. This creature would apparently open its beak-like mouth to emit a high-pitched scream or wail and lunge for the witness's car, which sent the him driving off with great haste. In the summer of 1973, a beast described as a “giant, man-like alligator” was sighted by residents of New Jersey’s Newton-Lafayette area, and in 1977 a scaled humanoid creature was frequently spotted in the fern and moss- covered uplands of southern New York state. 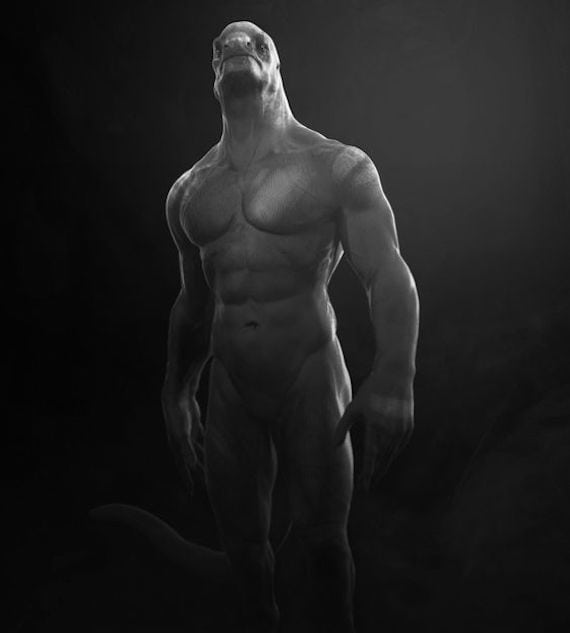 A well-known account of some sort of amphibious reptilian humanoid or fish-man comes from Thetis Lake, in Victoria, British Columbia, Canada. On August 19, 1972, two teenagers named Robin Flewellyn and Gordon Pike were at the lake when they claimed to have noticed a strange surging of the water just offshore. Shortly after this, there emerged what they would describe as a 5-foot tall humanoid covered with silver scales and with gills, webbed, clawed hands, bulging eyes, a sort spines jutting from its back, and a wide, fish-like mouth. The boys claimed that the creature chased them up the beach all the way to their car, and that it had actually managed to lunge forward to cut one of them on the hand with its sharp spines before they were able to escape.

The two frightened boys later told authorities, and while the whole story seemed pretty outlandish the two witnesses seemed to be genuinely disturbed about what they had seen, which forced the Royal Canadian Mounted Police to actually investigate the claims. Nothing would be found, but oddly another similar report would come in not long after, when on August 23 teenaged witnesses Russell Van Nice and Mike Gold said that they had been out on the opposite side of the lake of the original sighting when they saw a silvery, scaled creature around 5-feet tall and with a spike on its head emerge from the water, look around, and then slip back under to disappear. Interestingly the Natives of the area have long spoken of legendary fish-like humanoids inhabiting the lake, so are these reports perhaps of something very real or is it just hoaxes? No one knows, and there have been no other sightings, leaving it all to pure speculation. 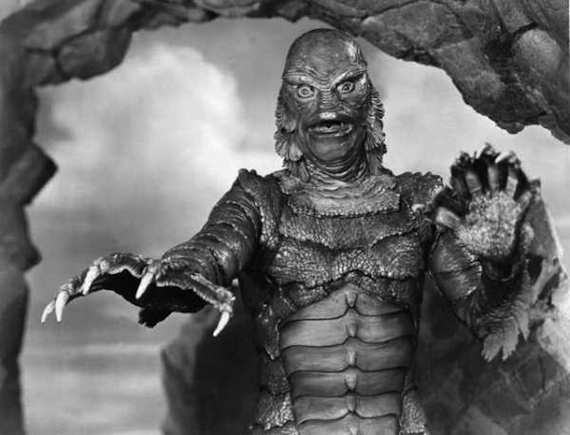 These cases are certainly hard to classify, and almost impossible to verify in any meaningful way, leaving us to ponder just what could lie at the heart of them. Is this just attention-seekers making up tall tales? Is it misidentifications of known animals or exotic escaped pets? Are there really undiscovered bipedal amphibious creatures of the likes described roaming the wilderness? If so then what could they possibly be? It is all very head-scratching indeed, and Loren Coleman has said of this conundrum thus:

Are these beasts future time travelers lost in some time/space warp? Or infrequent visitors? Or do you feel more comfortable with the idea there is a breeding population of scaly, manlike, upright creatures lingering along the edges of some of America’s swamps? Something is out there. That’s for sure.

Is there really something out there other than or rampant imaginations? The only thing that can truly be said for sure is that such reports rank as among some of the strangest sightings of mystery beasts, and show that the world of the weird goes deep. With all of the truly off-the-wall accounts out there, humanoid frog-men and gill-people? Why not?

Scientists May Have Created Human-Sheep Hybrids