What if Scientists Already Had Evidence for Creatures Like Sasquatch?

When it comes to physical proof for the existence of creatures like Bigfoot, the evidence is nearly always lacking. Nonetheless, a few spirited souls have campaigned for the scant physical clues that have been collected over the years, leading the charge for recognition of an undiscovered species in our midst, with or without a body to prove it.

The late anthropologist Grover Krantz had been among those who believed that enough hard evidence did exist, in the form of certain footprint castings made over the years which seemed unlikely to have been hoaxes carried out by amateurs. Despite seeing strong advocacy by the likes of Krantz and, more recently, Jeffery Meldrum and the late Dr. John Bindernagel, such "evidence" has failed to convince the broader scientific community. Calls for physical samples of hair, bones, flesh, or feces, are met with the sobering results of DNA studies in recent years, which in every case have found little to bolster claims for the existence of Bigfoot.

If anything, many of the modern Sasquatch studies--rather using reliable science to prove or disprove the creature's existence--have instead achieved little more than a mockery of the scientific process. After the unfortunate debacle a few years ago that involved researcher Melba Ketchum, and what was known as the Sasquatch Genome Project, Oxford University fellow Professor Bryan Sykes proceeded with his own DNA analysis of hair samples that determined all of them belonged to bears. Following the release of his study, Sykes nonetheless maintained that some of the genetic material he found might indicate an unusual, "relic" ursid species; however, subsequent analyses threw water on this idea, and further studies have reliably shown that the hair samples involved can all be attributed to known species of bears existing today.

Hence, a strong case for the existence of Bigfoot cannot be made, based on recent analysis of collected samples. However, this is not to say that some physical evidence might not have appeared over the years, which, if it were found that it had been preserved properly, could yield some interesting results with the help of modern technology.

The late zoologist Ivan Sanderson, a longtime champion for the existence of mystery hominids, noted two instances he knew of where feces presumed to have belonged to a Sasquatch had been recovered. In one of these, a staff photographer with the Humboldt Times out of Eureka, California, had been visiting a site popularly associated with reports of Bigfoot near Bluff Creek in 1958. As he was leaving the site, the photographer "stopped by a roadside creek and there he saw Bigfoot Tracks in the mud and encountered the usual appalling smell," whereupon a collection of what appeared to be large, human-like feces was present nearby. Although samples were collected, "this specimen was not, as far as I know, analyzed scientifically," Sanderson wrote.

The other case of which I have first hand knowledge is a quantity of which was shipped in a plastic container with dry ice to me in New York, for trans-shipment to Professor W. C. Osman Hill, then senior scientist at the London Zoological Society. This specimen shook up the scientist. I wish we had space to give you their report in full. It is quite amazing. The points of significance in it are as follows: In general, this fecal mass did not in any way resemble that of any known North American animal.

Of this most remarkable discovery, Sanderson described that "it did look humanoid," but that a number of peculiar features were present. Most notably, there were anomalies in the sample which, to Sanderson and Osman, seemed to suggest a peculiarity among the digestive system of the creature "as if the lower bowel had a spiral twist." However, of greatest significance had been what the sample contained. Sanderson notes that it "was composed exclusively of vegetable matter and this as far as could be identified of local California freshwater plants," which, if the sample could be authenticated, might indicate clues about the diet of such a creature.

"The real clincher," Sanderson wrote, had to do with something else that Osman found: the sample apparently "contained the eggs and desiccated remains of certain larvae otherwise known only in (a) some North American Indian tribal groups in the Northwest, (b) pigs imported from south China, (c) human beings in country districts in southwest China and (d) in pigs in that same area." This peculiar footnote was, in Sanderson's mind, strongly suggestive that the sample was authentic.

Of course, as addressed earlier, modern DNA studies performed on hair follicles and other samples purported to have belonged to Sasquatches have failed to impress anyone yet. Nonetheless, a question comes to mind here: what if there were samples that had been collected over the years--some of which may have been forgotten--that could prove useful in terms of modern DNA studies? 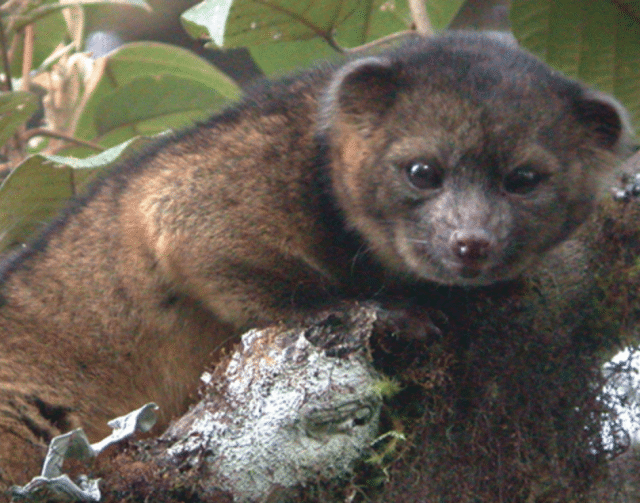 There have, in fact, been instances where the discovery of new animal species occurred not in the field, but after going through collections in museums and laboratories, resulting from researchers who spotted new things that were once overlooked. In 2013, the mouse-like olinguito was "discovered" after it was found to have been a victim of mistaken identity for many decades after a team of scientists finally gave a second opinion on specimens that had existed for years already. Similarly, in 2016 a fossil discovery which had been in the possession of the Smithsonian since 1951 was finally identified as a new species of extinct dolphin.

In contrast to smaller mammals and extinct creatures from the distant past, it may seem unlikely that biological samples that could be attributed to a Sasquatch, or anything similar, would simply languish in a museum for decades. However, something similar to this has happened, too. Back in 2011, researcher Mattew Hill wrote for the Daily Mail that "while walking around a collection of human and primate skeletons at the Royal College of Surgeons in London three years ago, I came across a withered finger which had only recently been found in the vaults of the College’s Hunterian Museum."

"It was labelled ‘a Yeti finger from Pangboche hand’," Hill recalls of the discovery, meaning that it had been the very same relic once smuggled to London by actor Jimmy Stewart and his wife, in cooperation with a Yeti expedition overseen by Peter Byrne, and funded by American oil tycoon Tom Slick.

"No one knows why," Hill wrote in December 2011, "after all the effort to obtain the finger and bring it back to London, it was just handed over to the museum to be neglected and forgotten." However, this is precisely what happened, and it was several decades before the lost "Yeti" finger was rediscovered and tested... only to reveal that the once-promising cryptid relic had indeed come from a human, rather than a yeti's hand.

Still, the question remains, in light of Ivan Sanderson's discussion of feces samples sent to Professor Osman Hill (who had also obtained the Pangboche Yeti finger, and later passed it along to the Hunterian Museum, where it stayed for decades), what else might be lurking in the vaults of museums and laboratories around the world, awaiting proper discovery... or in such case, rediscovery?

It could well be that there are pieces to this cryptozoological puzzle that may already be accounted for, but which have been forgotten with the passing of time. With the accumulation of new technologies over the years, perhaps such things should be afforded more than a mere passing glance the second time around... that is, of course, if such "re-discoveries" were ever to indeed turn up in the first place.