Amelia Earhart’s Bones Have Most Likely Been Identified

Has one of the greatest mysteries of air travel, women’s history and record-setting exploits finally been solved? A researcher claims he’s virtually certain remains found on the Pacific island of Nikumaroro in 1940 were those of pioneering aviator Amelia Earhart. Have we heard this story before? Will this help or hurt sales of the new Amelia Earhart Barbie doll?

In a new report in the Journal of Forensic Anthropology, Richard Jantz, professor emeritus of anthropology at the University of Tennessee, describes how he used the latest tools in forensic analysis to disprove contradictory studies of bones found on Nikumaroro in 1940, three years after Earhart and navigator Fred Noonan were last heard from on July 2, 1937, during the Papua New Guinea to Howland Island leg of her unprecedented round-the-world flight attempt. One of many search parties attempting to solve their mysterious disappearance found seven bones, part of what looked like a woman’s shoe, a box from a Brandis Navy Surveying Sextant like the one Noonan used and a Benedictine bottle from a spirit that Earhart liked to drink.

Along with bones found in 1940, a search party discovered part of a shoe judged to have been a woman's, a sextant box designed to hold a Brandis Navy Surveying Sextant, manufactured around 1918 and similar to the one Earhart's co-pilot used, and a uniquely-shaped bottle from Benedictine liqueur, a spirit known to be a favorite of Earhart. The items were eventually taken to the High Commission Office in Suva, Fiji, where Dr. D.W. Hoodless , the principal of the Central Medical School there, examined them in 1941 … using 1941 equipment and techniques.

Hoodless measured the skull, half-pelvis, arm bones and three long leg bones (tibia, humerus, and radius) and strongly speculated they were from a 45-to-55-year-old male about 5-to-5.5-feet tall – definitely not Amelia Earhart (a tall female) nor Noonan (over 6 feet tall). Those findings were well-publicized and fueled new searches for the fliers and their plane. Meanwhile, sometime after 1941, the bones disappeared and have never been found. 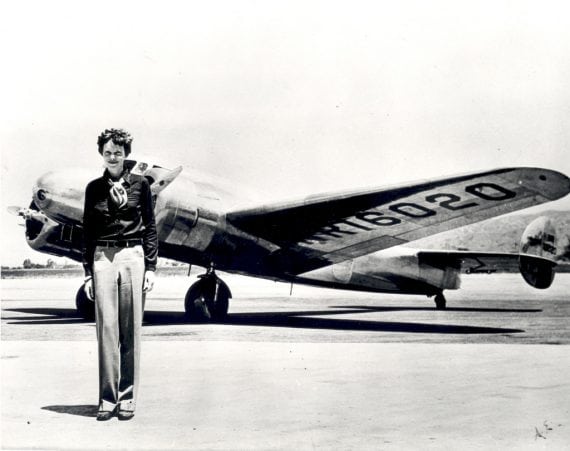 That means analysts like Richard Jantz must rely on Hoodless’ measurements as the primary data for new computerized analysis and forensic osteology. These new techniques, plus a huge modern database of body types, convinced Jantz that a) the height Hoodless came up with was underestimated, and b) the pelvic bone measurements of the subpubic angle clearly indicate they were from a female. Finally, Jantz compared the bone measurements, Earhart’s clothing measurements and photos showing her body size and shape with the current databases and concluded that the “Nikumaroro bones” are almost certainly Earhart’s.

Almost. Jantz’s needle of positive proof is stuck at “almost” because he can’t analyze those bones. What happened to them? The International Group for Historic Aircraft Recovery (TIGHAR) has been searching for them since 1999 with obviously no success. Meanwhile, there are those who still believe Hoodless’ analysis, others who believe Jantz, some who think the planes and the remains are on the bottom of the Pacific, others who think Earhart was captured and executed by the Japanese military and a hopeful few who want to believe the many folkloric tales of a strange white woman who lived and died among island natives.

Meanwhile, let's hope this helps the sales of the Ameilia Earhart Barbie doll and those of other inspiring women.

And the Subpubic Angles would be a great name for a band.