Most of us have seen films like Iron Man, where billionaire industrialist and weapons expert Tony Stark builds a mechanical exo-suit that he uses not only to escape from a group of terrorists, but also to save himself from impending death.

However, since long before Robert Downey Jr. began portraying the wealthy inventor-turned superhero, there have been actual efforts to create mechanical exo-suits, which not only would serve under such things as combat situations, but also aid those who are afflicted with various conditions in learning to walk again.

A Japanese robotics firm, Cyberdyne, has not only created such mechanical gear but that they have recently been granted approval by the Food and Drug Administration to enter and operate in the United States, leading to new innovations in the ways those with disabilities such as spinal injuries may be treated.

"Cyberdyne created a joint venture with Brooks Rehabilitation to bring the medical version of the HAL exoskeleton to all parts of the United States," Tech Times reports. "The Japanese company has been working on the HAL exoskeleton for almost a decade, but this is the first time that the technology has entered the country."

"The exoskeletons will soon be available across the United States, but for now, they are available at the new Brooks Cybernic Treatment Center in Jacksonville, Florida."

However, in an eerie twist, Iron Man isn't the only pop-culture tie-in that comes into play here, as some readers (and fans of the Terminator film franchise) will have already noticed; after all, this is by no means the first time we've heard of a company called Cyberdyne. 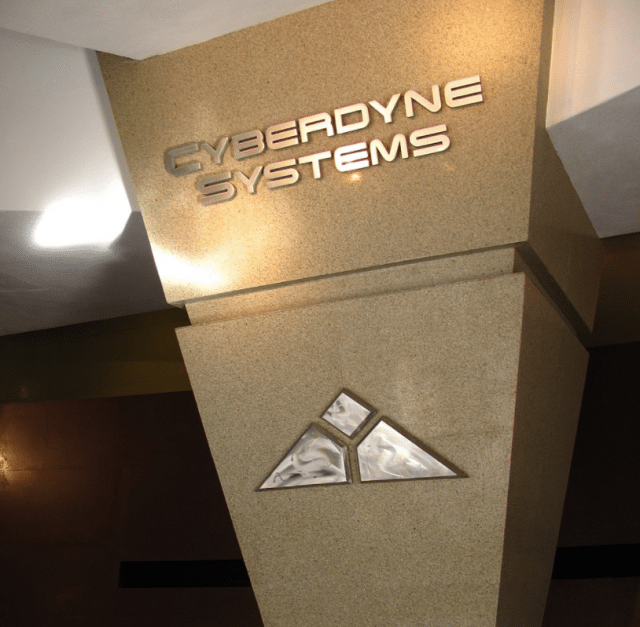 In the film Terminator: Judgement Day, we also saw the creation of a company called Cyberdyne, based in Sunnyvale, California. In the film, after a series 800 Terminator from the future is crushed in one of the hydraulic presses in Cyberdyne's factory, the remains of the Terminator, in the form of its arm and primary CPU chip, are recovered and reverse engineered. The resulting technology is an advanced microprocessor for a computer system Cyberdyne produces, intended for the control of military weaponry systems.

This innovation is what leads to the creation of the dreaded Skynet, an advanced computer network that becomes self-aware when it goes online on August 4, 1997, the so-called "Judgement Day" in the Terminator universe. When its creators attempt to shut down Skynet to ward off the threat of a hostile A.I. takeover, it launches a nuclear attack against Russia, which results in a global conflict.

Matt Novak, writing for Gizmodo's Paleofuture blog, noted that, "Cyberdyne's existence isn't exactly news. The company was founded back in 2004 and went public last year. But I just can't get over the name. It's like the founders wanted to troll the future."

Apparently, the real Cyberdyne company says that they weren't inspired by their preexisting fictional counterpart... this, despite the fact that both companies are associated with advanced, futuristic robotics.

We'll leave it at "art imitating life," then... however, let's just hope in the meantime that the names are the only similarities that arise between this real-life company, and it's fictional-doomsday-A.I.-killer robot counterpart.

The Wild Man of the Dover Woods