Ball Lightning: The Many Forms of Mysterious Atmospheric Illuminations

Ball lightning is a mystery of atmospheric science that has fascinated researchers and laymen alike for centuries. While a range of theories exist that suppose how and why it may form, to-date we have no real clear explanations for the phenomenon, despite the accumulation of a wealth of scientific data over the last several decades.

According to a recent paper in Science Advances, an effect similar to ball lightning has once again been produced in a lab setting ... although this time, it occurred on the quantum level. The study, co-authored by researchers Wonjae Lee1, Andrei H. Gheorghe, and several others is titled "Synthetic electromagnetic knot in a three-dimensional skyrmion." The study observes the behavior of particular groupings of atoms, called Bose-Einstein condensates, which consisted in this case of rubidium atoms that were operating near absolute zero (thus presenting conditions where the movement of particles is very minimal).

According to the paper's abstract, the experiment led to the observation of a theoretical phenomenon which had never been observed before in a lab setting, and which may present new clues about how ball lightning is formed:

"We experimentally realize a simulation in which a charged quantum particle interacts with the knotted electromagnetic fields peculiar to a topological model of ball lightning. These phenomena are induced by precise spatiotemporal control of the spin field of an atomic Bose-Einstein condensate, simultaneously creating a Shankar skyrmion—a topological excitation that was theoretically predicted four decades ago but never before observed experimentally. Our results reveal the versatile capabilities of synthetic electromagnetism and provide the first experimental images of topological three-dimensional skyrmions in a quantum system."

Writing for Gizmodo, science writer Ryan Mandelbaum explains Bose-Einstein condensates as systems that are "able to demonstrate strange quantum effects on macroscopic scales, and they allow researchers to create otherwise impossible-to-study phenomena, like magnets with only one pole, supersolids, Rydberg polarons, and in this case, strange, knotted magnetic fields."

Hence, the researchers liken the observation of the mysterious Shankar skyrmion, in this case, to being essentially a "topological model of ball lightning," produced in a controlled setting.

The enduring question, of course, is how (and why) such things may occur in nature, and presumably on a scale that is orders of magnitude greater than that observed when being induced in a lab setting. More importantly, what natural phenomena could constitute the unusual, self-contained luminosity of ball lightning, which sometimes appears to erupt spontaneously into an environment, and in the absence of weather systems and other meteorological phenomena associated with "normal" lightning?

There are some unusual occurrences of ball lightning that have been reported over the years, which may provide some clues about what causes it to form. Examining a few of these, one such report (albeit an early one) comes from Michael W.Rowe's 1983 article in the British Journal of Meteorology, titled "Unusual Ball Lightning," wherein it was described that a ball lightning manifestation occurred with what appeared to one observer to be "chains":

"It happened in the afternoon in 1924. There came a large ball of fire -- or so it looked -- but the thing was that it had chains all the way round. It lasted about five minutes, then all the chains clashed together with a terrific bang; then we had a terrible thunderstorm which lasted quite a long time.' In a second let ter Mrs. Revell drew the ball lightning as a red globe with 16 rays, composed of links like a chain, issuing from it; the rays were rather longer than the diameter of the ball. She said, 'You asked the size. From the ground it looked about four to five yards across, which would be larger than that in the sky. The chains opened from the top to the bottom with a terrific bang."

Four years before the account presented above, we have a similar incident from Parkside, Australia, where another unusual ball lighting manifestation was observed after a loud noise was heard some distance away. The account given is as follows:

"It wasn't long till we heard a hissing noise and, looking up to the western sky, saw an object about 12 inches in diameter slowly moving through the air down toward us -- about 12 feet away. It was travelling eastward and came down over Mrs. Harris's wooden fence landing on the cement porch floor about 3 feet behind us. It gracefully bounced along the cement floor in a straight path covering the 30 foot length of the verandah at a walking pace. It bounced three or four times rising to a height of 18 inches on each occasion. Each time the spherical ball touched the cement it was flattened at the point of contact, and deformed, but it quickly resumed its globular shape when it left the ground. It was not transparent but, rather, like a ball of smoke with glowing 'comma-shaped' electrical 'worms' wriggling about -- sizzling, hissing and flickering. It flattened by 1/4 into the egg shape on each bounce. On reaching the far western end of our verandah it accelerated rapidly and rose at a steep angle of about 45 degrees clearing the apricot tree, wires, and the house next door. At this stage my mother rushed in the back door of the house where we huddled for about 30 seconds before hearing a resounding crash some 250 yards away off to the east. It had hit Green's house at the far eastern end of Campbell Road. It apparently then bounced all the way to the Salvation Army home and demolished the whole house somewhere near Dawson and Florence Streets at Fullarton." 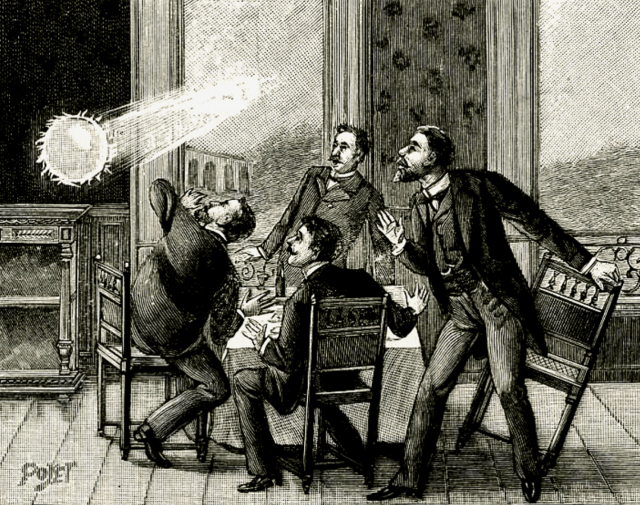 Another peculiarity of ball lightning, in addition to its association with unusual forms and loud noises, is its occasional appearance in a metallic, or even glass-like form (such reports often occur in the daytime). In an incident dated June 1, 1984, a Mrs Elsie Haigh of Nottingham, England, observed the following, which again was featured in the British Journal of Meteorology the same year the incident occurred:

"...at approximately 5.45 p.m., I was in my kitchen. The window and door were both closed. I was standing with my back to the window when I heard a 'boiling noise' and a noise which sounded like glass splintering -- a crash sound. I was very scared and turned around to face the window and saw a large glass-looking ball, approximately 10 inches in diameter (25 cm), slightly oblong (oblate), with a white filament in the middle. This was floating on a bowl of water which was in the sink. I ran to the bathroom, and seconds later I heard an explosion and splintering glass. When it was quiet -- I think a few seconds elapsed -- I returned to the kitchen. The ball had gone and there was no damage. I can only describe it as a miracle."

By far, the most peculiar report involving a ball lightning manifestation occurred on August 17, 1978, in a region of the Caucasian Mountains in Russia. The incident involved a man named Victor Kavunenko, who was camping with four other individuals at an altitude of 3900 meters when a luminous phenomenon manifested within their tent during the night:

"I woke up with the strange feeling that a stranger had made his way into our tent. Thrusting my head out of the sleeping bag, I froze. A bright yellow blob was floating about one metre from the floor. It disappeared into Korovin's sleeping bag. The man screamed in pain. The ball jumped out and proceeded to circle over the other bags now hiding in one, now in another. When it burned a hole in mine I felt an unbearable pain, as if I were being burned by a welding machine, and blacked out. Regaining consciousness after a while, I saw the same yellow ball which, methodically observing a pattern that was known to it alone, kept diving into the bags, evoking desperate, heart-rendering (sic) howls from the victims. This indescribable horror repeated itself several times. When I came back to my senses for the fifth or sixth time, the ball was gone. I could not move my arms or legs and my body was burning as if it had turned into a ball of fire itself. In the hospital, where we were flown by helicopter, seven wounds were discovered on my body. They were worse than burns. Pieces of muscle were found to be torn out to the bone. The same happened to Shigin, Kaprov and Bashkirov. Oleg Korovin had been killed by the ball -- possibly because his bag had been on a rubber mattress, insulating it from the ground. The ball lightning did not touch a single metal object, injuring only people."

This incident is arguably the most sensational of the collection examined in this article; it is always wise to treat such cases with caution, although Kavunenko's testimony certainly shouldn't be ruled out (and while speculative, the events described in Kavunenko's narrative certainly bear a passing similarity to some of the events surrounding the mysterious deaths of a group of Russian hikers in 1959, known as the Dyatlov Pass incident).

With little doubt, even the newest discoveries detailing ways ball lightning is formed leave much to the imagination. It is one of those rare, enduring mystery that remains in the modern era, and one that is sure to fascinate and perplex us for many more years to come.