Over the millennia our kind has invented and developed many forms of musical expression, which have often taken the form of various odd and unusual musical instruments, some of which many of us have never heard of and others that have gone extinct to pass into forgotten history. One bizarre instrument that you may not know of and which nearly vanished from the earth is a glass instrument especially intriguing for the supposed curse it was said to have, with its sounds said to have rather mysterious and sinister effects on the listener.

The practice of producing music through the rubbing of glass has been around since at least the Renaissance period, and consists of filling glasses with water and rubbing one’s fingers around the rims to make varying notes and tones to make music, with the pitch dependent on the amount of water in the glass. This form of instrument is known as an idiophone, meaning that it creates sounds through its own vibrations, without the need for strings or membranes of any kind, and in the case of using glasses it is also often referred to as a crystallophone. This sort of music gained popularity in the 1740s, when an Irish musician named Richard Pockrich toured London to much fanfare with his array of glass goblets, which he called his “glass harp” and which he played to curious audiences up until his death in a fire that destroyed the unique contraption. Other musicians who made the glass harp popular were Christoph Willibald Gluck and Edward Delaval, the latter who just happened to be a friend and colleague of Benjamin Franklin.

Intrigued with the use of vibrating glass to produce music after watching Delaval play in 1761, Franklin went about trying to create a version of the instrument that was more elaborate, yet easier to play. He enlisted the help of a glassblower named Charles James, and the two came up with a set of specially shaped glass vases that were arranged in a line similar to a piano keyboard, which was a radical change from the way the glasses had usually been played. The 37 glass bowls were color-coded corresponding to the pitch of their tones and mounted on a spindle, which was spun through a foot peddle. The musician merely had to wet the fingers and touch on the appropriate spinning vase to produce the desired sound, and it was all much easier and precise than using the traditional upright glasses, allowing up to 10 notes to be played simultaneously.

The advantages of this instrument are, that its tones are incomparably sweet beyond those of any other; that they may be swelled and softened at pleasure by stronger or weaker pressures of the finger, and continued to any length; and that the instrument, being well tuned, never again wants tuning.

After the glass armonica made its debut in 1762, its unique design and distinct, rather ethereal sound quickly made it popular, and for a time it was all the rage. Various musicians took up playing it, and there were efforts to further refine and evolve the design of the instrument, such as adding actual keyboards, utilizing absorbent pads to absorb excess vibrations for a clearer sound, or using violin strings instead of the fingers. During this period of extreme popularity for the bizarre instrument many famous composers created music for the glass armonica, including Baldassare Galuppi, Niccolò Jommelli, and such all-time greats as Wolfgang Amadeus Mozart in 1791 and Ludwig van Beethoven in 1814, among numerous others, and such shows were often played to sold out halls. Other famous figures known to have taken to playing the instrument during this boom were George Washington and Marie Antoinette.

Yet for all of this popularity there was a rumored dark side to the glass armonica as well. Rumors began to spread that the surreal, haunting tones put forth from the instrument caused a variety of problems in some listeners after prolonged exposure, including dizziness, fainting, nausea, or in worse cases permanent nerve damage, and that the music could induce deep depression, melancholy, suicidal thoughts, psychosis, and even stark raving insanity. Numerous armonica players were also said to have been negatively impacted by the music, such as a Marianne Davies, a relative of Franklin’s who purportedly spiraled into depression shortly after learning how to play it and touring with her singer sister. The German musicologist Friedrich Rochlitz once recommended that the instrument not be played excessively, and never by those with mental illness or any hint of depression, and wrote of the glass armonica’s supposed sinister effects thus:

[The armonica] excessively stimulates the nerves, plunges the player into a nagging depression and hence into a dark and melancholy mood, that is an apt method for slow self-annihilation.

This reputation soon had people whispering that the glass armonica was cursed, and it was often blamed for any misfortune or death of a player or person listening to it, no matter how tenuous the connection. Although it is not clear to just what extent any of these purported effects were real, there have been theories that could substantiate the claims somewhat. One lies in the nature of the instrument’s sound pitch and its effect on human hearing. The glass armonica typically produces tones in a range of 1–4 kHz, which is a weird range for our ears and brains as it is the specific frequency at which the brain has difficulty triangulating the spatial source of a sound. This has a confusing, disorienting effect, and might contribute to some of the symptoms reported.

There has also been the theory that the glass used in the manufacture of the instruments contained lead, which could have led to lead poisoning in those who handled the glass armonica. Lead poisoning was sadly rather common in the 18th and 19th century, and it has a whole range of unpleasant symptoms, including headaches, irritability, memory problems, anemia, seizures, coma, or even death. Many of the effects the glass armonica allegedly had could perhaps be the symptoms of lead poisoning, but at this point there is little evidence to suggest the glass used had anything more than trace amounts of lead in it, and it is uncertain if just touching lead tainted glass would have been enough to cause lead poisoning in the first place. 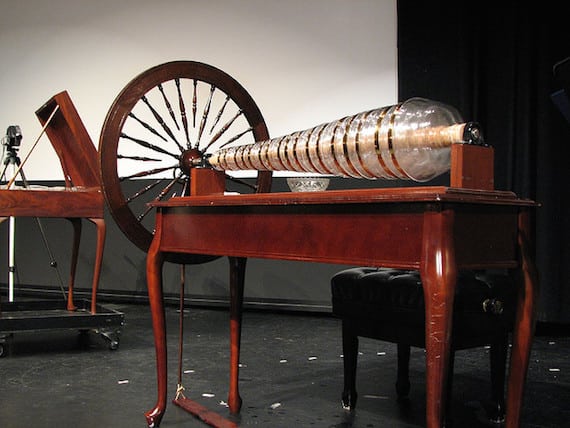 Whatever the reasons for these rumors, it is thought that the talk of the “curse” was one of the reasons for the rapid decline in the popularity of the glass armonica during the early 1800s. Other reasons included the fragile nature of the glass components and the fact that the instrument simply could not produce loud or bombastic enough sounds to fill the vast concert halls that were becoming en vogue at the time. The glass armonica with its ghostly, willowy sounds simply could not compete with other more powerful instruments such as stringed instruments, brass, woodwinds, and percussion, and this was all made even worse by the evolving tastes in music going on in the day. All of these factors conspired to make sure that by 1830 almost no one was playing the glass armonica any more, there were no more concerts, no new compositions, and the unusual instrument practically became extinct.

In more recent times the glass harmonica has experienced a slight resurrection, although there are only a handful of players and very few original specimens of the 18th and 19th century armonica remain, mostly in museums or private collections. Most of the instruments used now are imitations and recreations, and so it is hard to say if their tones and frequencies are exactly the same. Whether Franklin’s glass harmonica truly had ominous effects or not is unclear, but it is nevertheless an intriguing tale of a mysterious instrument that nearly went extinct and a bit of odd history.