In this day and age, we have gained powerful tools for charting and exploring our planet in the form of imaging services such as Google Maps, Google Earth, and Google Street. Whereas there was a time when seeing wondrous new places would have necessitated a hard, possibly perilous journey overland and overseas, we can now search our planet and zoom in on any location in the world from the comfort of our own living room. It is truly an amazing thing, and it seems that new discoveries pop up all of the time on such services, with millions of people carefully and tirelessly scouring the furthest corners of our planet over their computers and smartphones on the lookout for something unique. Then of course there are the very strange and anomalous things that are found as well. From UFOs, to alien bases and top-secret hidden facilities, you might be amazed at some of the weird stuff that pop up on these applications.

Among the myriad bizarre discoveries made on Google Earth, perhaps some of the stranger are all of the crashed UFOs that seem to be littering our planet. Of course many of these have been spotted in some of the most remote places on earth, and there have been several supposed crashed spaceships turned up in Antarctica. For instance, there is an odd dent in the snow discovered by Russian UFO-enthusiast Valentin Degterev, which was found at the Google Maps coordinates 80°34'08.4"S 30°05'19.3"W. You can see images of the site here. 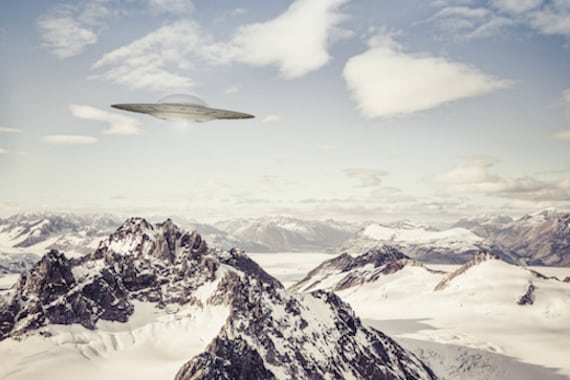 There was also a massive underwater structure off the coast apparently measuring around 1,650 feet in diameter at the coordinates 72°43'13.53"S 78°40'21.56"W. The object is so odd-looking that the site UFO Sightings Hotspot commented, “I’m not an iceberg expert but this object is really peculiar and looks like a vessel disguised as an iceberg.” Iceberg or alien mothership? You decide. See the images here.

Perhaps even more well-known is what was claimed to be a crashed flying saucer that can apparently be seen partly buried in the snow at the coordinates 66°16'24.1"S 100°59'04.8"E, which was reported by the YouTube channel SecureTeam 10 (remember that name because it will appear again). The images show what seems to be an artificial object that has seemingly come down to crash and skid along the ice and snow on a remote Antarctic island called South Georgia Island, leaving a trail in its wake. When the images were first released it caused quite an Internet sensation, and there was much speculation as to what it could be, ranging from a UFO, to a submarine stuck in the ice, to just a rock. However, cooler heads prevailed and it was of course mostly thought of as an alien spacecraft.

Unfortunately for the conspiracy theorists, experts who looked at the photos were quick to point out that the trail through the snow obviously leads away from a mountain, and that the anomaly is likely nothing more than a geological phenomenon caused by an avalanche. Geologist Richard Waller, of Keele University, said of the object:

It looks to me as though this feature is related to a large avalanche from a nearby mountain. Part of a hanging glacier appears to have collapsed, you can see the avalanche debris at the foot of the slope, and this could be a large block of ice that has travelled further as a consequence. The track shows that it's sliding over a snow-covered glacier before it comes to a rest. 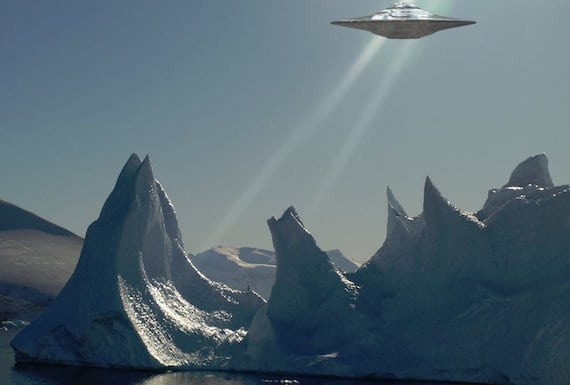 But where is the fun in that? Some people still hold onto the idea that these images are evidence of a crashed UFO. It certainly is odd-looking, so it could be something more bizarre in nature. You can see some of the images here. What do you think? Incidentally, SecureTeam10 has also claimed to have found a cloud formation like a white line that stretches across the earth from Antartica all the way to the North Pole, which is thought to have something to do with alien activity. It could also just just be a Google Earth glitch. Who knows? They also uncovered a disc-shaped object lurking in Antarctica at the coordinates 66°16'24.1"S 100°59'04.8"E. Looks odd enough, but it could be anything. You can see some of the photos here. Yet another Antarctic UFO can be seen here.

Another place that seems as if it would be isolated and remote enough to hide a downed spaceship is the bottom of the ocean, and once again SecureTeam10 managed to obtain Google evidence of such a site, this time 3,000 feet below the surface of the North Atlantic Ocean, where what appears to be a UFO has apparently skidded across the bottom to come to a rest. According to SecureTeam10, the massive, saucer-shaped object measures 2.81 miles (4.5 km) in diameter and left a trail 46 miles long before coming to a stop. Besides the idea that it is obviously an alien spaceship, there is also the theory that it is just a large, weird looking rock that has shifted through sea or tectonic movement, but no one really knows what it is. Check it out here. 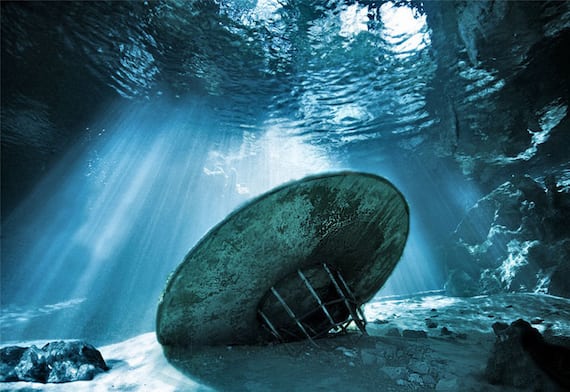 While we are here we might as well look at UFOs supposedly hidden away in secret areas, and there was one spotted by, again, SecureTeam10, that seems to be partially hidden under a tree in a restricted area of Arizona. Considering that it is a very saucer-looking object in a top-secret government area of course it is thought to be a crashed UFO. Or it could be a portable, round tent called a yurt or a water cistern. We don’t know because no one is allowed into the area. See some images here.

In addition to Google Earth, there have been some rather odd discoveries of UFOs using the similar Google Moon, a service launched in 2009 on the 40th anniversary of the Apollo 11 lunar landing. Paranormal researcher WowForReeel discovered a strange, perfectly triangular structure at the coordinates 22042'38.46N and 142034'44.52E, which also seems to have a row of seven evenly spaced light-like dots along its edge. The odd appearance of the object and the dots seem to suggest that this is not a natural formation, leading to speculation that it is either an alien spacecraft or some sort of secret moon base. The site Tech and Gadget News said of it:

The gigantic shape actually looks like the leading edge of an immense, triangular space ship, similar to, so far, super-secret stealth aircraft technology, but is much larger than any airplane ever built on Earth. The regularly spaced, circular promontory shapes which make up the seven points on the perfectly formed triangle wedge seem to be intelligently designed. To date, no other feature has ever been discovered which matches this shape on the moon, or any other planet observed by satellite or exploratory rover. The anomaly is so huge, it's possible it is some sort of moon base used as a facility for storing and launching alien UFO spacecraft.

It is hard to tell exactly what we are looking at here, but whatever it is, it certainly looks strange enough to be worthy of conspiracy theories. You can see images on it here. In addition to crashed spacecraft, there seem to be a lot of hidden bases lurking about, be it human-made or otherwise. Getting back to Antarctica, an anomalous structure was located that is claimed to measure 14 miles long by 4 miles wide, and which oddly seems to be partly blotted out, appearing as a blurry white mass that seems to have had its image tampered with, as if someone is trying to hide something. This sort of doctoring of Google images has been done numerous times before to obfuscate sensitive buildings or areas, so the theory is that in this case it is hiding a secret base of some sort, or even a vast crashed UFO. Skeptics have accused it of being nothing more than an image artifact or even a hoax, but there are plenty who still believe it to be something more. 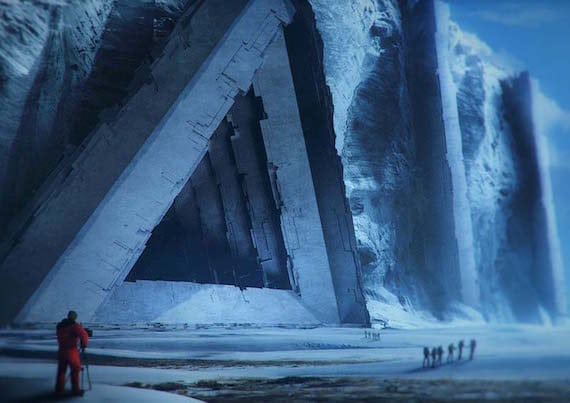 Another supposed giant underwater pyramid measuring 8.5 miles wide at its base was allegedly spotted off the coast of Mexico by Argentine UFO researcher Marcelo Igazusta at coordinates 12°8'1.49”N 119°35'26.39”W. Scott Waring, of the site Daily Blog, said of the unusual structure:

Even if this is not a UFO that landed in the ocean that was being used as an alien base, it still is a monumental discovery. An 8.5-mile pyramid… biggest the world has ever known, and it’s right off of Mexico, near the ancient Mayan and Aztec pyramids. Humans could never have built such a construction. Only aliens could accomplish making such a massive structure.

See more one the Mexican underwater pyramid and images here. Several other supposed bases have been suggested to be lurking beneath a series of very peculiar circular holes found in the wilderness in far-flung countries. One such hole was located in the jungles of South Sudan, which appears to be a perfectly circular body of water with what looks like a floating layer of foliage bobbing about on its surface. A similar anomaly was found in Argentina at coordinates 34°15'07.8"S 58°49'47.4"W, with a round floating island placed over a circular hole in the jungle. In both cases the holes are in completely remote areas with no signs of human development or even roads. The idea is that these holes are too perfectly formed to be natural phenomena, that they were created by someone or something, and that they are meant for flying saucers to come through. You can see images of the jungle hole UFO base in Argentina here.

There are certainly other mysterious such sites where these came from, and it seems that practically every week there is some new oddity that turns up on Google Earth which gets people talking. Many of such images as we have seen here likely have some rational explanation, but that has not stopped anyone from coming up with often very far-out theories and ideas that tend to spread far and wide across the Internet. The only way to be sure, it would seem, is to do things the old-fashioned way and actually trudge on out to these places, and this is something that is rarely done. Whatever these anomalies may be, it certainly shows that even as we have peeled back the layers of our world and gained the means by which to train our gaze on pretty much every spot on earth, the wilds of this planet still hold their mysteries.

Astronomers Say Our Galaxy May Be Filled with Alien ‘Ghost’ Signals