Whenever you feel like you’re having a bad day, just be lucky that you don’t have dead ants pouring from your eyes. This could always get a lot worse - just ask this poor girl from the southwest Indian state of Karnataka. The Times of India report that an 11-year-old girl named Ashwini from the town of Belthangady has some sort of bizarre infestation causing tiny dead ants to fall from her eyes each day. Worst of all? They have no idea what’s causing it or how to stop it.

Ashwini’s bizarre condition was first noticed by her parents after she complained of itching and burning eyes. Her parents found a dead ant in her eye, removed it, and believed the problem was over. However, the symptoms continued, and more dead ants were found on her eyes and face. That’s when Ashwini’s parents sought medical help.

When doctors pulled back Ashwini’s eyelids to examine her eyes, they discovered a tiny dead ant caught between the girl’s lower eyelid and her eyeball. Five or six ants are found in the girl’s eyes each day, and about 60 ants have fallen out so far, all of them dead.

One theory is that the ants crawled into the girls head through her ears while she was sleeping. IBTimes India reports that this case is eerily similar to a 2016 incident in which another Indian girl, this time 12 years old, had to have hundreds of ants removed from her head. The treating physician in that case, Dr. Jawahar Talsania, told Times of India “the girl’s case is very challenging for me, as I have never seen such a case, nor found it in medical history.” 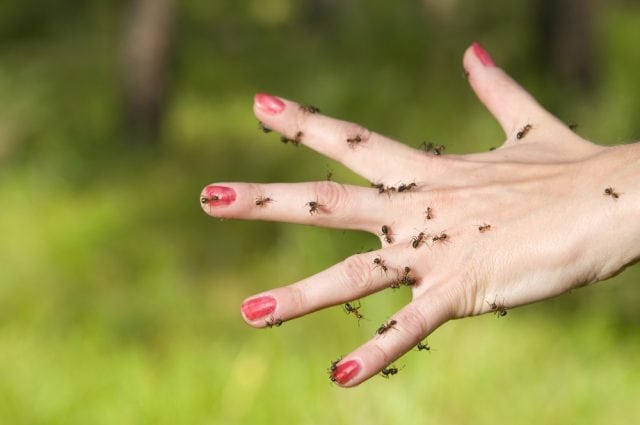 Is this some kind of a disgusting new medical and entomological phenomenon, or just bad tabloid journalism running out of ideas? As we continue to poison and destroy the natural world, could more insects and other creatures seek out the safety of the human body? Many new parasites are on the rise. Wash your hands regularly, folks.