From Grinning Man to Grinning Woman

A couple of days ago, I wrote an article titled "Beware of the Grinning Man." It started as follows: "If you know your Men in Black history, then you will also know that the real MIB are nothing like their Hollywood versions, better known as agents J and K, and as played by Will Smith and Tommy Lee Jones. The real-world MIB look weird (plastic-like skin, blank expressions and staring, bulging eyes) and they act weird (such as seemingly not understanding what food is, and coming across as being "programmed," rather than self-aware). There's another issue too; it's a very strange issue. Namely, that some of the Men in Black have almost constant grins on their faces. But, of course, there is nothing good about those smiles. They are the smiles of the likes of serial-killers and nutcases. But, you probably guessed that, right?"

It's a little-known fact that the Grinning Man is not alone. It has its female counterpart, the Grinning Woman. I have a few such cases on record, but the following one really stands out when it comes to the matter of extreme weirdness.

Gloria is an elderly woman who lives in Decatur, Texas and who I met one afternoon in late November 2014. I quickly decided to make the approximately 110-mile-roundtrip, after hearing a bit of her story down the phone the previous evening. I set off early, wondering, as I always do, what exactly I might be in for. It could have been a less than extraordinary experience – as is sometimes the case. But, not this time.

On this occasion, the trip was well worth it. I arrived at an old house – probably dating from the 1940s, and which was well kept and that had a welcoming porch, on which were a couple of chairs. I knocked the door and in just a few seconds it opened. In front of me was Gloria, a white-haired lady who smiled broadly. At least, her experience wasn’t affecting her character, I thought. She invited me in and I sat down, as a couple of caged canaries bid me welcome. At least, I think that’s what they did.

On July 19, 2012, Gloria told me – as we drank coffee and ate homemade lemon cake in her living-room – she briefly saw what can only be accurately described as a flying saucer, which hovered over her home as she sat in her backyard, reading a book and with her two dogs for company. In fact, it was the barking of both dogs - which stared intently and rigidly at the sky - that alerted Gloria to the presence of the weird craft. It didn’t stay around for long, however. It was a case of here one second and gone the next second. But that was not all. 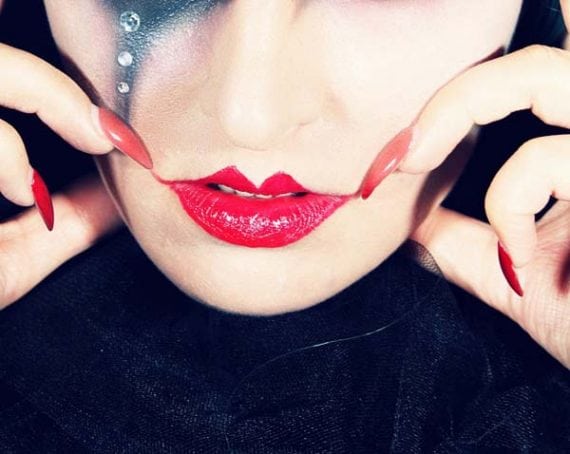 The next afternoon, that of the 20th, there was a knock at the door. It was a pale-faced, thin woman of about thirty, wearing a long black wig and dressed in a black jacket, a white blouse, and a flowing, black skirt. Gloria felt deeply uncomfortable as, upon opening the door, the Woman in Black immediately proceeded to warn her not to talk about the UFO she had encountered the previous day, due to the claim that “the government is concerned.” Concerned about what, though, was never explained. When the warning was over, the WIB smiled broadly at Gloria. But, echoing the tales of the Grinning Man, the look on the woman's face was hair-raising, rather than friendly. It was a look of madness.

Clearly, the WIB was not from the government. Or, from any government. According to Gloria, the woman didn’t even look human. “Skeletal” would have been a far better description. After asking what the time was (which is something the MIB are often known for doing), the WIB turned, walked down Gloria’s driveway, and vanished. Never to be seen again. It was a familiar scenario – one which I knew only too well. I still do. Gloria thanked me for offering some thoughts and advice on the affair – such as try and put it all behind you, as I believe these things thrive on our fears – and gave me a plentiful supply of that delicious lemon cake to take back with me. We still keep in touch. I’m pleased to say that her WIB has not returned.