Lower Michigan May Be Target of Falling Chinese Space Station

The Lower Peninsula of the state of Michigan is often referred to as “the mitten” because its shape resembles winter hand coverings or perhaps the leather gloves that baseball players wear. That shape may be ironic if the latest predictions hold true that China’s dead and falling Tiangong-1 space station will pierce Earth’s atmosphere on or about April 3rd and head straight for the pocket of Michigan’s mitt. Will this be the last out for Wolverine State?

“An Aerospace graphic shows that parts of southern Lower Michigan fall into the regions listed with the highest probability of debris landing.” 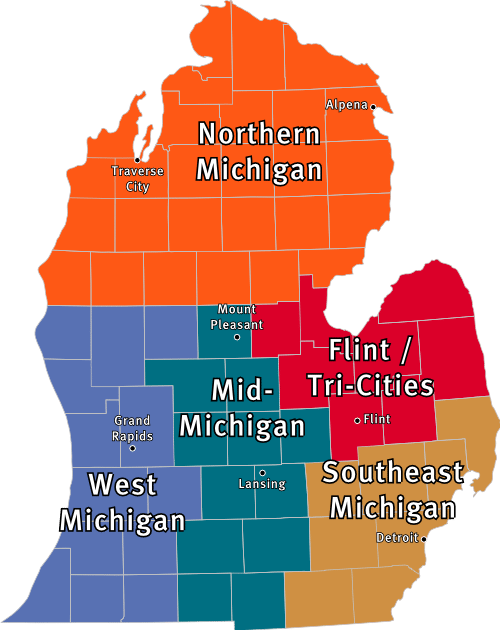 The Aerospace Corporation operates a federally funded research and development center in El Segundo, California, which provides technical guidance and advice on all aspects of space missions to military, civil, and commercial customers. One critical aspect is the end of these missions and Aerospace maintains a page on its website for tracking the ultimate demise of Tiangong-1, the 8.5 ton space station which China’s National Space Administration launched in 2011 and lost contact with and control over in January 2016. Since then, its final resting place has been the subject of speculations, predictions and warnings – along with varying degrees of indifference by the Chinese space program.

A map of the world provided by Aerospace (seen here) shows two narrow bands across in the northern and southern hemispheres that it predicts are the most likely areas for Tiangong-1 to hit. Other high probability areas include Northern China, central Italy, northern Spain, the Middle East, New Zealand, Tasmania, South America, southern Africa, and the northern states of the U.S. Should people living in these areas be worried?

“When considering the worst-case location (yellow regions of the map) the probability that a specific person (i.e., you) will be struck by Tiangong-1 debris is about one million times smaller than the odds of winning the Powerball jackpot. In the history of spaceflight, no known person has ever been harmed by reentering space debris.”

Considering the Powerball jackpot as of this writing is up to $420 million due to no winning tickets for weeks, no one should be worried. And yet, the news is filled with stories of worried Lower Michigan residents. It could be that they’re uneasy after the same area was hit by pieces of a mysterious meteor on January 20th of this year – a meteor that attracted hunters hoping to cash in with a collector offering $20,000 for a kilo of meteorite matter. Who knows what pieces of Tiangong-1 might sell for?

Wait a minute! Is Michigan scare-mongering rumors about the Chinese space station to keep prospectors away so they can find and sell the valuable chunks of Chinese space debris for themselves? With the way the area’s economy has been hit over the past few decades, who can blame them?

No matter where it lands, Aerospace warns that it may not be wise to get too close to any debris.

“Potentially, there may be a highly toxic and corrosive substance called hydrazine on board the spacecraft that could survive reentry. For your safety, do not touch any debris you may find on the ground nor inhale vapors it may emit.”

Wait a minute! Is Aerospace spreading rumors so its people can collect the debris for themselves?

You can’t trust anybody these days.

The Dyatlov Pass Incident: Myths, Realities, and New Ideas on an Old Mystery