Against all odds, a guy who calls himself “mad” built a homemade, steam-powered rocket, defeated government regulators who tried to stop him, conquered daunting mechanical problems on a shoestring budget and finally launched himself successfully and returned alive and relatively unharmed. Is this a great country or what?

The successful launch and return to Earth of Mad Mike Hughes on Saturday, March 24th, 2018, is almost enough to make many forget one of the reasons he did it was to promote and raise money for his ultimate goal – to travel high enough to prove (or disprove) that the Earth is flat. He began building this homemade, steam-powered rocket in his garage last year and scheduled his first launch attempt in November amidst publicity and controversy over his flat Earth views, which some suggested he adopted just to raise money. Hughes also railed against NASA with equally-contentious views that the International Space Station does not exist and videos depicting it are created on a sound stage.

Despite that, Mad Mike Hughes is still a genius when it comes to steam-powered rocket flight. In 2014 he claimed to have set the world record of 1,374 feet for a manned steam-powered rocket. That rocket and the one he launched yesterday were made from scrounged parts and low-budget components he purchased with his limo driver paycheck and small donations. 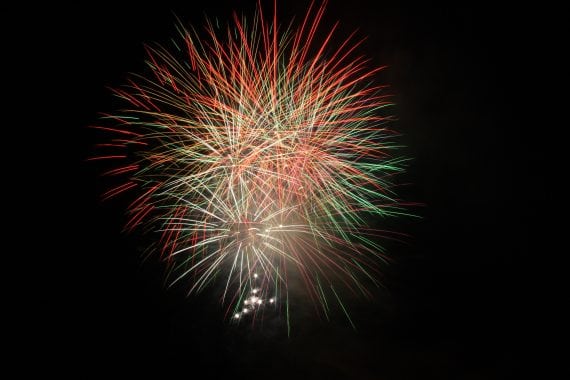 The launch on March 24th took place in Amboy, a so-called ghost town in California’s Mojave Desert about 200 miles east of Los Angeles where Mike Hughes has had his on-again, off-again dispute with the Bureau of Land Management over where he was permitted to launch from. According to NBC News, despite less-than-ideal wind conditions and slightly less than maximum 350 psi pressure, Mad Mike launched the rocket without a countdown shortly after 3 pm local time. He reached 1875 feet (.57 km) in altitude and an estimated speed of 350 mph before the steam literally ran out of the craft and it changed directions downward. One parachute opened immediately and a second deployed moments before the nose hit the ground, breaking it in two. (You can see the entire buildup, launch and landing video here.)

Those who have watched NASA and SpaceX launches and landings should have gotten a chuckle at the sight of a few guys in baseball caps huffing and puffing to the landing site, where the door was opened and a sore but successful Mike Hughes emerged triumphantly.

"Am I glad I did it? Yeah. I guess. I'll feel it in the morning. I won't be able to get out of bed. At least I can go home and have dinner and see my cats tonight."

After that, what’s next for Mad Mike? In a video recorded prior to the launch, he announced plans to build a "Rockoon" -- a rocket that will be carried into the atmosphere by a gas-filled balloon, then dropped and ignited to lift its passenger (you know who) to an altitude of 68 miles where he’ll be able to see or not see the curvature of the Earth. Aside from another pile of government forms to fill out, what does Mad Mike expect to see?

“Do I believe the Earth is shaped like a Frisbee? I believe it is. Do I know for sure? No. That's why I want to go up in space."

And, if he survives that – no matter what he finds – he plans to run for governor of California.

Is this a great country or what?