Mount Etna is Mysteriously Sliding Into the Mediterranean

If you can’t plug up an active volcano or drop a nuke down into it to blast the magma apart before it blasts out, the next best thing might be to push it into the nearest large body of water to cool or extinguish the hot lava. Sounds far-fetched? We may soon find out first-hand if it works. Volcanologists have determined that Sicily’s Mount Etna, the tallest active volcano in Europe, is sliding into the Mediterranean Sea. Can the process be sped up before the next eruption? This sounds a like a job for those sweepers who make the curling stones move faster in the Winter Olympics.

In a paper published in the Bulletin of Volcanology, researchers from the U.K. and France describe how they determined that a volcano which has erupted at least 200 times since 1500 BCE is creeping downhill in an east-south-east direction and heading directly towards the Mediterranean. However, it will first demolish the town of Giarre which is directly in its path. Starting 11 years ago, in between eruptions (there was one last year), experienced volcano investigator (seems like a good job these days) John Murray installed GPS devices on and around Etna. A recent analysis of that data showed his team that Mount Etna is suffering from basement sliding, which sounds like a birthday party game but is actually a known volcanic phenomenon. However, this is the first time it’s ever been witnessed happening to an active volcano and they're not sure why. 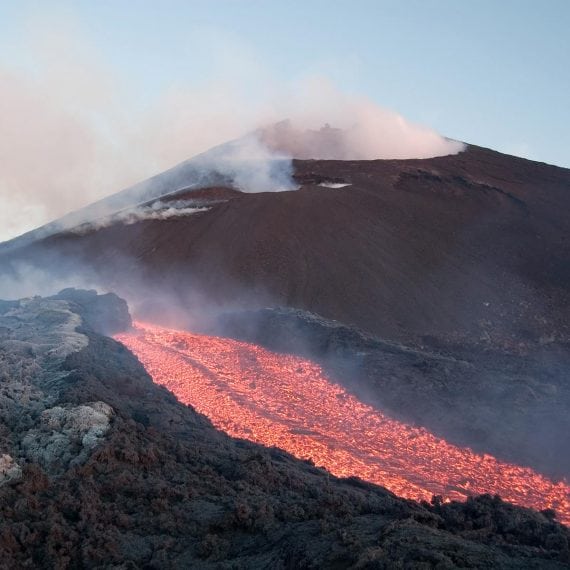 Should the good people of Giarre – not to mention the good fish living in the cool waters of the Mediterranean Sea off the Sicilian coast – be worried about the creeping volcano? That depends on their life expectancy … and the health of Mount Etna. The movement of the mountain has been clocked at a speed of 14 mm (.55 inches) per year. That may not sound fast compared to Ferraris or Fiats, but it’s blazing in volcanic terms. Moreover, because it’s an active volcano, the researchers are concerned that any Etna eruption could further loosen the loose soil and gravel that’s causing the basement sliding, leading to a massive failure in the support structure and an equally massive "large catastrophic sector collapse" and "devastating consequences" such as landslides towards Giarre, only 15 km (9.3 miles) away. 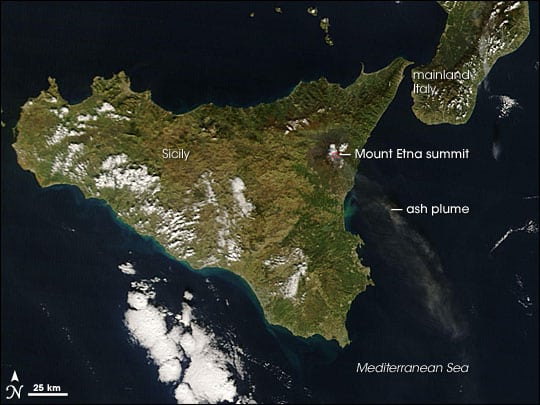 Now should they be worried, John Murray?

"I would say there is currently no cause for alarm, but it is something we need to keep an eye on, especially to see if there is an acceleration in this motion."

That means the poor citizens of Giarre will probably jump every time a truck rumbles by.

The smart ones will name their band The Basement Sliders.