Mysteries, the Mafia, and Vatican Conspiracies: The Strange Death of Roberto Calvi

Mysterious deaths and conspiracies go hand in hand, it seems. There are always theories swirling about these strange passings that point to insidious machinations beyond our control or understanding. One very remarkable such case of conspiracy and mystery is the death of a wealthy Italian banker, whose strange demise would become embroiled with talk of mafia dealings, Vatican conspiracies, and the workings of ancient secret societies.

Roberto Calvi was a prominent banker in Italy, chairman of the the Banco Ambrosiano, which was the second largest bank in the country at the time. Calvi was mostly referred to and well-known by his media nickname “God’s Banker,” due to his close ties and financial dealings with the Vatican, and for years he was a well-off, respected figure. It was in 1978 that things would begin to crumble, and the banker would find himself in a spiraling web of scandal, intrigue, and conspiracy. It was in this year that the Bank of Italy investigated the Banco Ambrosiano and found evidence that billions of lire amounting to around $27 million had been transferred out of the country illegally, and they promptly filed a report on the find, which would lead to one of the biggest financial scandals in Italian history.

The criminal investigation that followed in the wake of the report led to the conviction of Roberto Calvi as the chief conspirator in the scandal in 1981. The conviction led to a four-year suspended sentence and a hefty fine of $19.8 million dollars, and Calvi served a short prison stint during which time he attempted suicide, but this did not stop him. Calvi was soon released on bail, amazingly maintaining his position as chairperson of the bank pending an appeal, while meanwhile friends and family insisted that Calvi was innocent and that he had been manipulated and coerced into the shady dealings by sinister parties behind the scenes.

In June of 1982, Calvi sent a cryptic message to Pope John Paul II, which seemed to suggest that such illegal banking transactions were commonplace, indicating that the Vatican had been complacent, and in which he would promise, “a catastrophe of unimaginable proportions in which the Church will suffer the gravest damage.” It was all very interesting, considering that the Vatican Bank owned 10% of Banco Ambrosiano and was their main shareholder. Just a few weeks later, the banking behemoth Banco Ambrosiano collapsed under the groaning weight of the scandal and the debt it owed, estimated at being around $1.5 billion. Rather suspiciously, the Vatican Bank agreed to pay off $225 million of the debt, although it was never established if the Holy See had had anything to do with the scandal, and it was granted immunity to prosecution on the matter.

Just 5 days after his mysterious message to the Pope, Calvi vanished from his apartment in Rome and flew to London on a fake passport, after which he rented a flat in the Chelsea district. Just after this, he was removed from his post at the bank and his private secretary, Graziella Corrocher, committed suicide by jumping from a window. On June 18, 1982, Calvi’s dead body was found hanging from the Blackfriars Bridge along the Thames River with his pockets loaded with bricks and overflowing with about $15,000 in cash of various currencies. Considering the banking scandal that had been all over the news, Calvi’s death was widely reported on in the media, and conspiracies were immediately flying as to who had killed him.

Although the exact cause of death was not determined, it was initially branded a simple suicide by authorities who seemed keen to swiftly sweep in all under the rug, but this was all hotly contested by Calvi’s family, who hired private investigators to look into the matter further, headed by a man named Jeff Katz. It was immediately found through additional forensic tests that, although Calvi’s pockets had been filled with bricks, for some unknown reason his hands held no evidence that he had ever touched them, meaning that someone else had likely placed them there. There was also found no sign that the hanging had been the actual cause of death and there was no trace of residue of the rust or paint of the scaffolding of the bridge on his person. It was also a mystery as to how he could have climbed up to that point on a busy bridge and then put the bricks in and hung himself without anyone at all noticing him. In short, it strongly appeared that Calvi had been killed somewhere else and then hung from the bridge to make it look like he had killed himself.

Katz had this new evidence sent to the City of London Police, but they would have nothing to do with it, standing behind their verdict of suicide. When an independent German forensic scientist followed up on all of this and had the body exhumed, he found that Katz had been right, and published these findings in 2002. With these urgent findings increasingly pointing to murder, the case was reopened by London in 2003, and this new investigation would turn up all sorts of new details. For instance, it was uncovered that the mafia had been using the Banco Ambrosiano for money laundering, and that Calvi must have at least been aware that this was all going on. In light of this enlightening information, it was suspected that when the bank crashed someone had to be held accountable for the mafia’s lost money, and that someone would have been Calvi. 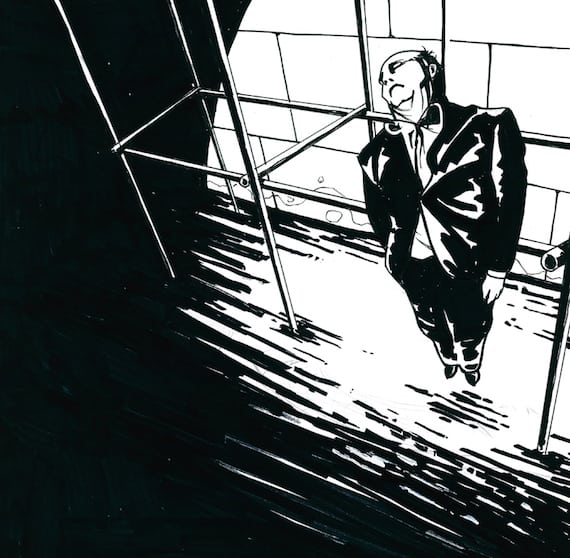 Adding to this damning evidence that the mafia may have killed him, it came to light that one of the people who had assisted Calvi’s flight to London, a Sergio Vaccari, had been found viciously stabbed to death just 3 months after Calvi had died, also eerily with bricks stuffed into his pockets. Adding to this mafia intrigue, it was also discovered that Calvi had been involved with an ultra right-wing illegal masonic lodge called Propaganda Due (P2), who were sometimes referred to as “The Black Friars” and who were also apparently customers of Calvi’s bank. Indeed, Vaccari was found to have been in possession of a list of members of the notorious P2, who had been infiltrating the government for their own insidious purposes, adding further conspiracy theories that perhaps they had been killed by the secret society.

In 1991 a mafioso living in London named Francesco Marino Mannoia claimed that Calvi had indeed been offed due to his losing the mob so much money, and he fingered a hitman and drug dealer named Francesco Di Carlo as the killer. For his part, Di Carlo would deny having had any role in the killing, although he stated that the mob and the P2 were very interested in getting him out of the picture, saying thus:

Calvi was naming names. No one had any trust in him any more. He owed a lot of money. His friends had all distanced themselves. Everyone wanted to get rid of him. He had been arrested and he had started to talk. Then he had tried to kill himself by cutting his wrists. He was released, but knew he could be rearrested at any time. He was weak, he was a broken man.

I was not the one who hanged Calvi. One day I may write the full story, but the real killers will never be brought to justice because they are being protected by the Italian state, by members of the P2 masonic lodge. They have massive power. They are made up of a mixture of politicians, bank presidents, the military, top security and so on. This is a case that they continue to open and close again and again but it will never be resolved. The higher you go, the less evidence you will find.

Throughout the investigation there were ominous signs that someone behind the scenes did not appreciate the police looking into matters. In 2003, the Italian detective leading the investigation, Luca Tescaroli, received a letter containing some batteries and a strange black powder, along with a message that read, “This is an ultimatum. Stop.” In the end Calvi’s death was reevaluated as a murder and Di Carlo was the chief suspect. In 2005, five people went to trial for the murder, Francesco di Carlo, his ex-girlfriend Manuela Kleinszig, businessman Ernesto Diotallevi, mafia boss Giuseppe Caló, and Silvano Vittor, Calvi’s bodyguard, but every single one of them would be acquitted in 2007 due to lack of evidence. Licio Gelli, the grand master of the P2 masonic lodge, was also put under investigation but nothing ever came of it and the charges were dropped. The only thing they would learn from Gelli was that he believed Calvi had indeed been murdered by parties associated with the Vatican.

Fingers of course have always been pointed right at the Vatican itself, and the theories abound that they might have had something to do with it. After all, their organization dealt heavily with Calvi’s bank and stood to lose a lot from the scandal, which was somewhat illustrated in Calvi’s haunting letter to them. Italian journalist Andrea Purgatori would say of this:

When Calvi died, and the money disappeared it was wonderful for the Vatican bank. It was a very good business, his death.

An investigative author named Gerald Posner has also expressed suspicions that the Vatican may have been involved. He said of the Vatican’s bank dealings and possible role thus:

It (the Vatican) takes money in and then it invests that money, makes money on it and keeps it all secret, it really operates almost like an off-shore bank in the heart of Rome. It’s a bank like no other in the world. So all you need to do if you’re the Mafia or you’re an Italian looking to avoid taxes is get your money physically into the Vatican. You can drive a truck with ten million pounds in it, it’ll go straight into the Vatican and once it does, it disappears. No Italian tax investigator, no drug investigator, nobody from the DEA or the FBI can ever see it.

In the end, the death of Roberto Calvi has never been solved, and the depth of conspiracy never fully uncovered. It is unclear just why he died or by whose hand, and theories have swirled ever since. Did Calvi die by the hand of the mafia or even the Vatican? Did he fall due to the workings and machinations of the secret society P2? Or did he just merely commit suicide as was originally stated? Despite all of the investigations and court dealings that have ensued with his strange death the answers remain unclear.