Given all of the declassified files and recordings of unexplained aerial phenomena being made public in the United States, it’s no surprise that other countries including America’s closest neighbors would begin disclosing their own interest in or knowledge of UFOs. Case in point: a new trove of documents have been released which shed light on the Canadian government's role in researching UFO phenomena. What will these add to the growing body of declassified UFO files?

Noted Canadian ufologist Chris Rutkowski uncovered the documents in Canada’s national archives and recently posted them to his blog Ufology Research. The 27 pages of documents detail six UFO cases recorded in 1967 and were prepared by Wing Commander Douglas Robertson. It is unknown to whom the documents were presented, though Rutkowski speculates it could have been for a newly-appointed Minister of Defence. Between 1966 and 1967, UFO reports went up by over 400% in Canada and several government departments began taking serious interest in these phenomena. 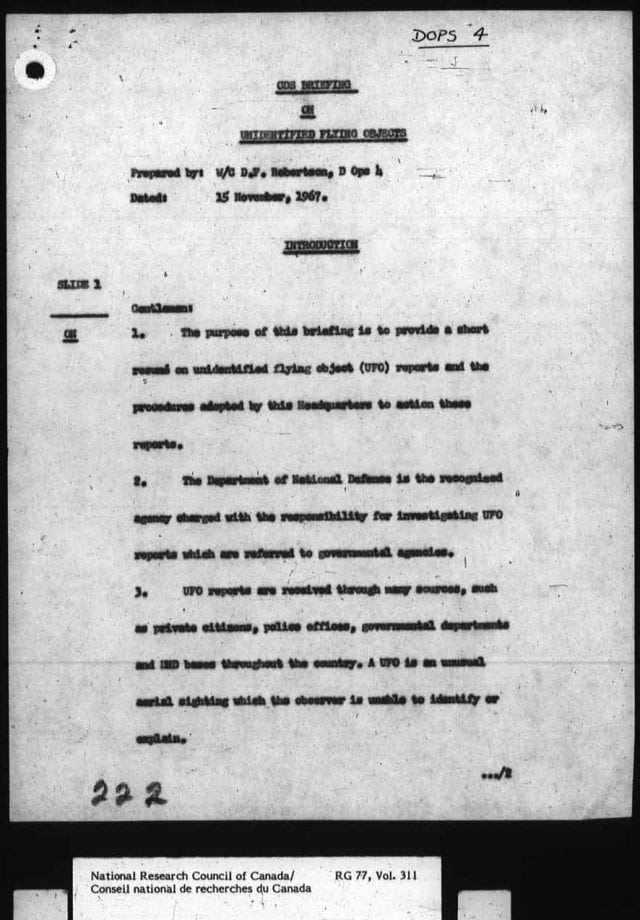 The documents ultimately breakdown numerous sightings and reports into seven categories: hoaxes, mass hysteria or psychological suggestion, misinterpretations of natural events, advanced or unknown military technology, and sightings likely due to psychological conditions. However, the report does list a category which includes truly anomalous sightings defined as “unusual sightings which the viewer is unable to identify or explain, namely, UFOs.” The document also contains references to various educational and medical institutions which aided the Ministry of Defence in debriefing, interviewing, and assessing witnesses.

Among the incidents referred to in the documents are the Falcon Lake incident, widely regarded as one of Canada’s most famous encounters. The new documents reveal that the Ministry of Defence found evidence of radioactivity which corroborates eyewitness testimony, and that scientists were unable to explain the anomaly, noting “a satisfactory ending or conclusion is still lacking.” Another incident in which a man reported a UFO flying over trees near Clear Water Bay found evidence of wilted leaves on said trees, with the Department of Forestry concluding “they are unable to explain the reason for the wilting.” Images of the documents and an analysis of them can be found on Rutkowski’s blog here.

Other incidents referred to include photographs of various unidentified flying objects, anomalous radar sightings, and even crop circles. Like in last year’s disclosure of the Pentagon’s secretive UFO research projects, these documents are far from the smoking gun proof of alien visitation we all wish they were. Still, disclosing that governments are indeed taking the UFO phenomenon seriously is a step in the right direction.

Unless, of course, all of these so-called disclosures are simply some kind of misdirection or some type of psy-op. Without a doubt, the real spooky stuff will never see the light of day, all evidence of it incinerated or buried at the bottom of a salt mine years ago. Is this new evidence meant to placate us just a little longer, keeping our attention on the government bureaucracies which hide these secrets as opposed to on the skies?

Lower Michigan May Be Target of Falling Chinese Space Station