“There is no hell, there is the disappearance of sinful souls.”

Of all people, you would think that Pope Francis would know not to upset the status quo right before Easter. And yet, he allegedly declared hell does not exist … and it has become of public relations nightmare for the Vatican and an even worse nightmare for his followers as, just a few hours after this shocking declaration, pieces of St. Peter's Basilica in Rome suddenly came crashing to the ground – narrowly missing worshipers and Michelangelo’s famous Pieta statue. Is this a coincidence or a sign? Will churches be even MORE overflowing on Easter Sunday?

The problem started … as many religious problems do … with an atheist. Eugenio Scalfari -- a 93-year-old Italian journalist, former member of the Italian parliament, co-founder of the newspaper La Repubblica and an avowed atheist – was interviewing Pope Francis for a piece that was scheduled to run on March 29th – Holy Thursday for Catholics. Why was Pope Francis being interviewed by an atheist? Because that’s the kind of open-to-all-ideas pope he is. And that’s probably what got him into the mess he’s in.

Scalfari, being an experienced journalist who’s done his share of big interviews, claims he never has and still does not take notes nor record his interviews with the pope, preferring to rely on his memory. Being 93, that may be why the Vatican’s PR team is blaming his memory for what it’s calling his “reconstruction” of what the pontiff actually said. The pope himself did not issue a retraction nor make any subsequent comments on the interview and the alleged quote.

Why? Perhaps he was a little worried. Just a few hours after the interview in La Repubblica was published, all hell (you knew it was coming) broke loose in St. Peter’s Basilica as pieces broke loose from the ceiling and crashed hundreds of feet to the floor. Officially known as the Papal Basilica of St. Peter in the Vatican, it’s considered to be the burial site of Saint Peter and the church where the pope conducts services on major Catholic occasions, including the upcoming Easter Sunday mass.

According to The Duran and other media outlets, a Vatican spokesperson said that no one was injured when plaster fell from the ceiling and broke into pieces on the marble floor near Michelangelo’s Pieta, one of the most famous statues in the world (photo here). The area was cordoned off until an inspection could be made. This is not what the Vatican wants to hear when thousands of people will be crammed into the basilica on Sunday. 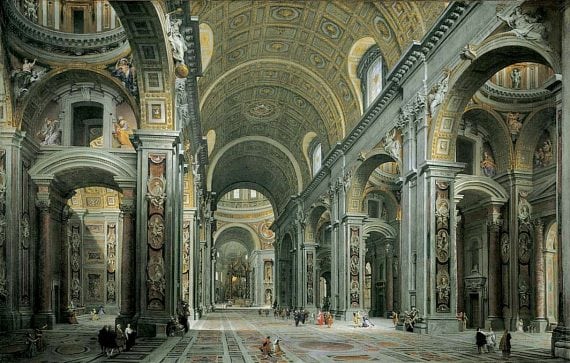 Did Pope Francis really say that hell – the place where many believe the souls of the worst of the worst spend eternity in torture as punishment – doesn’t exist? Only he and Eugenio Scalfari know for sure. Is there a connection between the alleged quote and the ceiling pieces falling in St. Peter’s Basilica, the pope’s church, two days before Easter? Who knows? Stranger things have happened. Is the declaration that there is no hell a big enough scandal to warrant such a sign? That’s one for the theologians and religious historians.

The answer to all of these questions will be revealed if Pope Francis conducts Easter services in a pointy white hardhat.