A researcher studying the possibility of microscopic life on Mars has just made a stunning announcement that he has evidence showing soft-bodied creatures once lived on the red planet and NASA knows this as well and is covering up the evidence. What’s more, the Curiosity Rover was parked in a bed of fossils and NASA received orders from “HQ” to move along … there’s nothing to see here. Really?

The researcher is Barry DiGregorio and if his name sounds familiar, you’re probably up on ichnology – the study of dissolution cavities left behind by organisms along with their tracks, trails and burrows. DiGregorio is an honorary research fellow at the University of Buckingham, whose website bio brags that “in 2000 Barry published a comparison of dissolution cavities found in rocks on the shores of Lake Ontario to similar looking rocks imaged at the Viking 2 landing site on Mars.” So, if there’s anyone qualified to spot evidence of organisms that once crawled around on Mars, it would be Barry DiGregorio -- and that’s exactly what he claims to have done.

In January, NASA posted photos on Twitter taken by the Curiosity rover of what it called stick-like figures and speculated on what they might be.

“Each is about a quarter-inch long. Maybe they're crystals? Or they could be minerals that filled spaces where crystals dissolved away.”

According to Metro.co,uk, Barry vehemently disagreed.

“They look remarkably similar to Ordovician trace fossils I have studied and photographed here on Earth. If not trace fossils, what other geological explanations will NASA come up with.”

If you slept through that lecture in geology class, the Ordovician period was part of the Paleozoic Era, lasting from 485.4 to 443.8 million years ago. DiGregiorio was obviously awake and immediately spotted the resemblance between life signs on Earth and what he believes are life signs on Mars. Unfortunately, NASA didn’t agree with him and sent Curiosity to take photos in another spot.

With that move, DeGregorio told the Daily Star Online that he smelled a rat.

"Put it this way, these images, these figures, have not been seen on Mars to date. One of the things that grabbed me immediately was the expediency that NASA left the area of such a mission. So when I started looking, it wasn't just the objects that were attached the outside, what they are calling sticks. "If you look at the images more closely, the sticks merge into the host rock, this actually has features in it that are reminiscent of trace fossils.”

"NASA has turned its back on trying to get the data on this. The order came down from NASA HQ that they should move the rover on to the next point.” 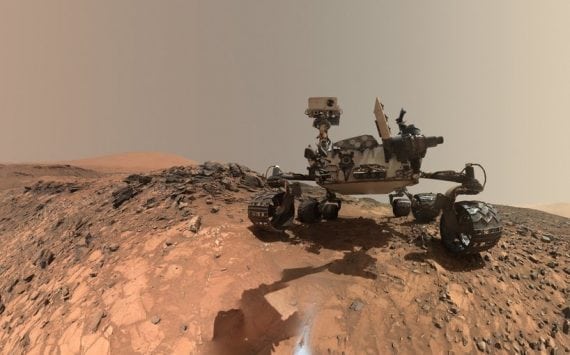 Why does he think NASA was ordered by “HQ” (NASA is part of the executive branch – is he referring to the White House?) to ‘turn its back on signs of life? DiGregorio believes NASA or HQ or someone in the know wants to increase excitement in the proposed 2030 manned mission to Mar by having a human (re-)discover these signs of Martian life in person.

"If they announced that, once that has been satisfied to the general public, people who pay their taxes to send the $2.5billion probe to Mars, they are going to say okay well we discovered life, we don't need to go there anymore."

DiGregorio says he’s working with two other experts in ichnology (there’s more than him?) on a paper he will present to NASA and the public clearly stating the evidence that those “stick figures” on Mars are signs of life.

Is he right? Will he succeed?

Oh man, wonder if he'll ever know
He's in the best selling show
Is there life on Mars?
-- "Life on Mars?" (David Bowie)

Ball Lightning: The Many Forms of Mysterious Atmospheric Illuminations