In a recent article titled "Paranormal Phenomena and Government Agencies" I focused my attention on several things: (A) the occult-based research of the CIA's Operation Often; (B) files on Aleister Crowley that had been compiled by the U.K.'s MI5 (the equivalent of the United States' Federal Bureau of Investigation); and (C) the CIA's interest in Ouija-boards and life after death. All of these issues have one thing in common: the files have yet to surface into the public domain. Some may have been destroyed. Others, perhaps, are still tucked away, out of sight to anyone and everyone without the required clearance and "need to know."

There is another aspect to this "missing files/hidden files" angle which may be worth looking into, as it too revolves around matters of a mysterious nature. It's an issue that is based around not relatively recent phenomena, but matters dating back thousands of years. It's a story that surfaced in 2009 but which, for the most part, has not resulted in much publicity. The story in question can be found in the pages of H.P. Albarelli, Jr.'s book, A Terrible Mistake. The sub-title is The Murder of Frank Olson and the CIA's Secret Cold War Experiments. 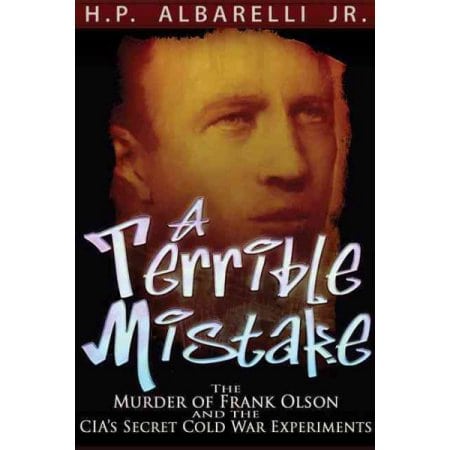 In a January 19, 2017 article here at Mysterious Universe on the death of Frank Olson, I wrote: "Frank Olson, a brilliant chemist who, in the early 1950s, worked for the U.S. Army’s Special Operations Division. Although Olson was at the forefront of researching mind-altering technology, his work was not destined to last. Nor was his life. Olson died on November 28, 1953, as a result of an, ahem, 'fall' from the 10th floor of the Statler Hotel, Manhattan. Today, the overriding theory is that Olson – who began to regret working on the controversial programs – was forcibly thrown out of the window of the room by people who were fearful Olson was about to blow the lid on the sheer extent to which unwitting people had been dosed with psychedelics, chemical concoctions, and various other mind-manipulating substances, and all in the name of national security. A controversial scenario, to be sure."

Of course, the vast majority of Albarelli's book is focused on Frank Olson's mysterious and controversial death. But, Albarelli also takes a look at some of the weirder work undertaken by the CIA, such as investigating UFO sightings. Yes, most people with an interest in the UFO phenomenon will know all too well that the CIA has taken an interest in the subject. But, Albarelli reveals something else in his book.

I should stress that the data I'm about to share with you is very brief: it takes up just a few lines of page 264 of Albarelli's book (be aware that there are a couple of editions, so the page numbers might differ). But, for those interested in matters relative to missing and hidden files, you may want to look into the following further, to see if something intriguing just might surface. I should also stress that I know nothing at all about the documents, beyond the tidbits Albarelli shares with us in the pages of A Terrible Mistake. That said, he writes:

Albarelli quotes from what is described as "one document," and which reads as follows: " These subjects without doubt appear strange and extreme, but one cannot easily escape the reality of their effects and impacts. Exploration of a thorough nature is wise, and may well prove beneficial in a number of areas. Thusly, concerns about appearances, or ill comments, should by put aside, but caution should be exerted at every step."

As with the Crowley files and the Operation Often documents, we are left with a fascinating story, but a lack of documentation that can be examined. Maybe a few Freedom of Information Act requests will begin to change that situation. Or, maybe not.