Decades from now, when the last piteous human survivors of the Great Robot Rebellion are huddled in the cold, dank darkness of their subterranean refuge, they might look back upon this incident as the first shot fired in what would become the war to end all wars, the last great conflict which finally severed the gossamer thread keeping the technological Sword of Damocles hanging precariously over the collective head of humankind. Of course, it could also be that the enlightened, transhuman citizens of a utopian future might look back upon this incident as a minor blip in a peaceful revolution that freed humanity from the chains of labor and inequality. However the future ends up, one thing is clear: the struggle between autonomous technology and humans has already begun, and now robots have claimed their first victim. 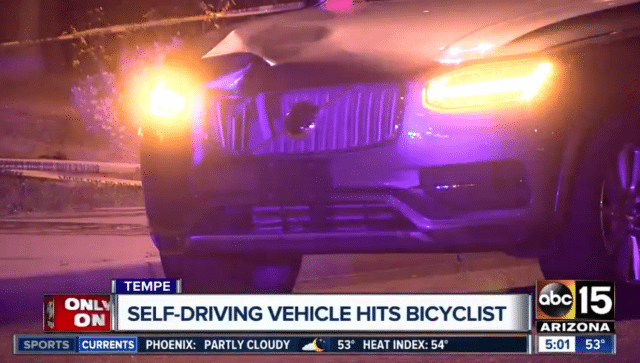 That’s my take on this story, anyway. Arizona news station KNXV is reporting that a self-driving Uber car struck and killed a (human) pedestrian in the early morning hours of Monday, March 19th. The pedestrian, identified as 49-year-old Elaine Herzberg, was walking her bike across Mill Avenue in Tempe, Arizona when the autonomous vehicle struck her. It has been reported that the vehicle showed no signs of slowing at all before it struck Herzberg, who was taken to a nearby hospital and later pronounced dead. Uber issued a statement claiming their “hearts go out to the victim’s family” and that they “are fully cooperating with local authorities in their investigation of this incident." Uber is investigating the incident alongside Tempe police and has halted operation of its self-driving fleets until the investigation is complete.

Maybe this is the robots' first cold dish of revenge served up in response to all the neo-Luddites' vandalism of and attacks on self-driving cars lately. Maybe this is a test to see how we respond. Maybe it’s already too late. Or, more likely, maybe this is just an unfortunate accident which shows autonomous vehicle technology isn’t quite ready to hit the streets yet.

Either way, it brings up serious questions: do we really want deadly robots roaming freely around our streets? Do we really want to potentially render 1/3 of all human jobs obsolete with autonomous vehicles alone? Maybe we’ve already become like frogs in a pot of slowly boiling water, unaware of the doom rising around us. Is it time to take a stand before most of humanity is rendered useless by hordes of soulless robots controlled by a small, unbelievably wealthy elite?

See, in all of the science fiction tales of robot uprisings, one small detail is missing: the killer robots' human overlords, great bellies quivering with laughter as they watch the slaughter of 99.9% of humankind from the safe haven of a bunker built inside of a mountain. Forget the meek - the megarich shall inherit the Earth. Ashes to ashes, proles.