If you believed your husband was in danger of being killed by evil female ghost that has allegedly killed five healthy young men in your town already, what would be the best thing to do?

a. Make him wear women’s clothing and makeup to bed
b. Guard the front door with a scarecrow exposing his 2.6 foot penis
c. Stop smoking Thai sticks
d. Ask for a divorce and leave him and his buddies to defend themselves

The correct answers are a. and b., according to a report from northeast Thailand where the mysterious deaths of males in a village have stopped since the women started sharing their dresses and lipstick and creating well-endowed straw figures to ward off a murderous female ghost. This is relief to everyone in the village, especially Thai stick fans.

According to Sanook! News, this strange and probably folkloric behavior was observed recently in the tiny village of Na Cheuak Yai in the Nong Ta Yai subdistrict of the Pla Pak district of the Nakhon Phanomin province in north-eastern Thailand (in case you don’t believe the pictures and want to plan a trip to see this for yourself). The first mysterious deaths reported in February were two men in their 40s who were said to be strong and disease-free. Then, according to a villager, this happened:

''They had been bathing then went to bed like normal. Their relatives found them dead in the morning.”

Three more healthy men died since then and, with a population of only around 90, teenaged boys are worried they could be next and women are fearful they’ll run out of potential mates and people to take out the garbage. All of the reports refer to bathing and bed, but no one seems to be concerned about the local water supply. Instead, their fear is of the bed and the ghost of an elderly widow (or widows, since there’s been five deaths) looking for a mate to join her in the afterlife. 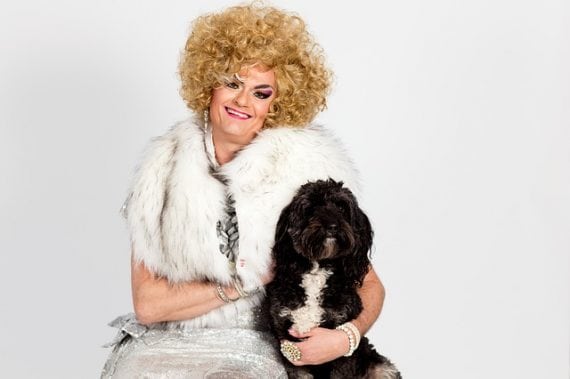 Of course. These myths, legends and folklore always seem to blame the elderly women who are wrinkled, stooped over, often nearly blind and deaf, lonely and needy – in other words, terrifying to people who fear growing old themselves. That’s the reason why the younger women in Na Cheuak Yai put their men in dresses and applied makeup before going to bed – to confuse the ghost of the elderly woman who once lived in the village that the guy she used to like and decided to come back for is now a female.

Obviously, some ghosts of old widows are too smart for that, so the local women also protected their homes by placing scarecrow-like guards at the door with 80 cm (2.6 foot) penises (obviously not in proportion to the small straw figures) to let the ghost know that, while the guy in bed wearing a dress and makeup won’t defend himself against her, the straw man with the big straw penis is much more virile and a force to be reckoned with, especially with his sign that reads “There is no man here.” To make them even scarier, the penises have been painted red (fill in your own STD it might be suffering from here). Pictures of the straw dolls can be seen here.

OK, plenty of cultures and religions have plenty of strange customs and rituals to deal with things they don’t understand. While others may be checking the water supply or passing out anitbiotics, the women and especially men of Na Cheuak Yai are thanking their tight dresses and well-endowed scarecrows because, as one villager explains:

“Since hanging in front of the house, no man has died. The villagers do it and we're comforted by our faith.”

The Bizarre Mystery Shrieks of Oregon