It is no secret that the world's dictators and even some of its more mainstream leaders have a habit of expressing some eccentric behaviors. With absolute power one is able to come out with their freakier side and indulge in habits, pastimes, and pursuits that may have not been possible before. This is perhaps nothing new, however, one dictator that took things into truly odd realms of the bizarre was the former leader of Panama, who included amongst his hobbies subjugating his people, creating rivals, and according to some reports dabbling in a little good ole' fashioned black magic.

It is probably best to start with a bit of history to catch up. The de facto ruler of the Central American country of Panama from 1983 to 1989, Manuel Antonio Noriega was both a politician and a military officer, who rose to power after the vacuum left by the death of Omar Torrijos, who himself had seized the reigns of the country in a 1968 coup. Noriega had had ties with the U.S. long before this, having been a valued intelligence source since the 1950s, becoming a paid informant for the CIA in 1967, as well as serving as an artery through which the United States pumped weapons and cash to U.S.-backed counter-insurgency forces all over the volatile region of Latin America. Although Noriega would amass a fortune on the illicit drug trade through shady deals, he was mostly tolerated by the U.S. government because of his usefulness, and was ironically even considered an important player in the war against drugs, simultaneously profiting off of drugs while helping the Drug Enforcement Administration to restrict illegal drug shipments. At this point, Noriega was considered to be one of the good guys, and a vital U.S. ally.

After Noriega’s rise to power during the 1980s, Panama became more or less a military dictatorship, with all of the media censorship, abuse of human rights, political squashing of opponents, and expansion of the military that implies. As Noriega increasingly spun out of control and became more unpredictable, relations between him and the U.S. began to deteriorate until in 1986 he was ordered to step down from power by the United States, who were in a complicated position of still considering him somewhat of an ally, but worried about their hold on the Panama Canal and the numerous military bases they had in the country under the increasingly unruly leader. The U.S. tried to use drug charges to force Noriega out of power, but this did not work, and Noriega became ever more defiant of his U.S. allies even as they continued to put further pressure on him.

Things cooled even further, and Noriega really got the Americans worried when he began to consort with and receive financial assistance from countries who were not the best of friends with the United States, such as Cuba, Nicaragua, and Libya. The spooked U.S. government promptly drew up contingency plans to invade Panama if need be. During this time Noriega foiled a coup attempt and also rigged the Panamanian national elections in 1989 so that the U.S. backed candidates could not win. After yet another coup attempt was avoided by Noriega, tensions between Panama and the U.S. began to soar, and the last straw was the death of Marine Captain Richard E. Hadded, who was gunned down and killed at a roadblock by Panamanian military personnel in October of 1989. On December 20, 1989, the successful invasion of Panama was initiated, and Noriega was captured for extradition to Miami to answer for his crimes.

While there is no doubt that Noriega was a bit off-the-rails and is considered one of the most well-known dictators of all time, it seems that the rabbit hole of the bizarre goes quite deep with him indeed, beyond what anyone could have expected. During the invasion of Panama, Noriega spent several days on the run from U.S. forces in and around Panama City, and it was during this chase that military personnel would uncover a vast trove of weirdness at one of Noriega’s houses near a U.S. officers' club at Fort Amador on December 25, 1989.

According to Special Agent James R. Dibble, an expert on cults and “deviant movements" in the Army's Criminal Investigation Division at the time, here in this palatial residence among the opulent furnishings and numerous bottles of French champagne authorities allegedly turned up all manner of evidence that Noriega had been heavily involved in what he called “evil sorcery.” Here was found all manner of occult paraphernalia, symbols, and signs for spells and magical rituals related to a type of Voodoo called Santeria, as well as a similar religion called Candomble, both of which are a mixture of the African tribal beliefs brought over by slaves and Roman Catholicism, and are practiced widely in Latin America. Although these two religions are mostly seen as using the power of saints and benevolent magic, in another room was found an altar and ritual site for a type of sinister black magic called brujeria as well as a dark religion that relies on ritual slayings, called Palo Mayombe.

Apparently there was evidence that these rituals and other black magic spells had been carried out against such various people as Panama's new president, Guillermo Endara, Ronald Reagan, George H.W. Bush and the entire U.S. Congress, such as pictures of these individuals in various states of being done up for ritual use or their names written on ritualistic items. In one area of the house was found a large rock inscribed with numerous black magic symbols that rested upon a list containing around two dozen names, including Gen. Marc Cisneros, the commander of the Panama-based U.S. Army South, Venezuelan President Carlos Andres Perez, Costa Rican President Oscar Arias, the Roman Catholic archbishop of Panama, Marcos McGrath, Papal Nuncio Laboa, a prominent local Catholic priest, Henry Kissinger, and several U.S. Embassy officials including Ambassador Arthur Davis, all of who had apparently also been targeted by some sort of sinister magic spell, and it was believed that the handwriting was that of Noriega himself.

In other bizarreness, in another area of the house a picture of George H.W. Bush was prominently displayed with a layer of red wax over it, and the names of Reagan and Bush were also found etched onto sinister-looking candles found stashed in the refrigerator. Another candle held a slip of paper with the name of U.N. Secretary General Javier Perez de Cuellar written on it seven times, and yet another was inscribed with the name of Joao Baena Soares, secretary general of the Organization of American States. Scrawled on a piece of paper tucked within a rotting tamale was the name of investigative journalist Seymour Hersh, who had written an expose on Noriega’s drug dealings in the New York Times, and there were numerous other names and photos in a similar state of pretty much anyone who had ever crossed or upset Noriega in any way, including even those of his own inner circle. 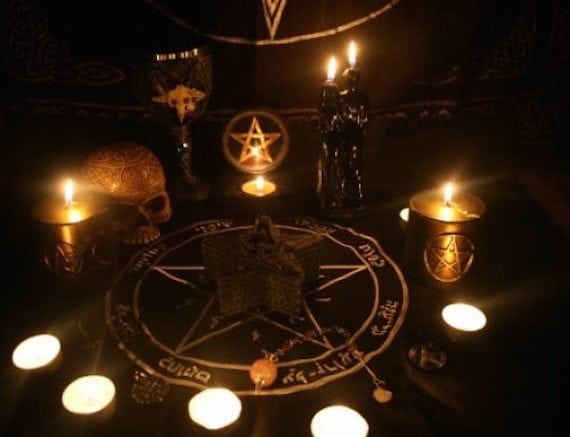 According to Dibble, there was also found a book of evil spells that had belonged to a notorious witch from Brazil, with whom Noriega had consorted and whose pictures were found plastered on the walls of the home, as well as evidence that Noriega had partaken in “sex magic to boost his machismo.” The witch was not named, but it was claimed that she had escaped just minutes before the house was raided and that there were signs that she had been engaged in one of her dark rituals at the time she was interrupted. The most bizarre finding of them all was supposedly a gruesome ritualistic display that was described in an 1989 article on the finding by reporter William Branigin thus:

Perhaps the most powerful "destructive magic" in evidence was wrapped in a red cloth that gave off a powerful stench of decay. Dibble opened it to find a rotting cow's tongue embedded in a bowl of white corn with eight spoiled eggs. The tongue was folded in half and nailed closed with two dozen large nails. Insects crawled over the concoction, which Dibble said had been removed from a refrigerator in the "brujeria room" of Noriega's secret house. Dibble pulled out the nails and unfolded the tongue. A name appeared to be written in ink inside it, but it was illegible.

It is unclear if any of this magical debauchery had any effect whatsoever, as Noriega was captured not long after the discovery and faced stiff punishment. Long having turned a blind eye to the dictator’s drug deals, the United States brought the full weight of these charges down upon him, and he would serve 17 years in prison there before being extradited yet again, this time to France to face money laundering charges, after which he was sent back to prison in Panama in 2011 to answer for crimes under his rule, where he would languish until his death from a brain hemorrhage in 2017, black magic or no.

This is a very weird little case buried among a very prominent point in history, and sheds light on a bizarre aspect of one of the world's most well-known dictators. What was Noriega up to behind closed doors with his witch consort? What sort of rituals did they engage in to neutralize their enemies and did any of them work? Who knows? One can only speculate and wonder on just what Manuel Noriega's secret magic lair was all about.