The Mysterious Werewolves of Haiti

One type of monster that seems to be very pervasive in the human psyche across cultures is that of creatures with the power to transform from human to animal, and by far the most well-known of these entities is the werewolf of legend. Yet there have always been those who believe that these are not merely the product of our imagination, but very real monsters that lurk out beyond our understanding. One such creature seems to have crept out of the shadows of lore in the aftermath of a terrible tragedy in the Caribbean country of Haiti, where survivors of a terrible earthquake have had to deal with homelessness, lack of resources, looters, thieves, and apparently werewolves as well.

Far from coming from any one single origin, tales of werewolves have been present in cultures throughout the world for centuries, and they have been known by many names. In ancient Greece they were known as the lycanthropus, in Ireland the faoladh or conriocht, the Dutch had their woerwulf, the Italians their lupo mannero, in France they were referred to as the loup-garou, for Serbians the vulkodlaks, and East Europe had its mardagayl in Armenia, and varkulak of Bulgaria. In South America they were known as the lobizon, in Trinidad the legarou, and on and on it goes, with this persistent myth of shape-shifting monsters prevalent across a surprisingly far-reaching range of peoples and cultures, although the means by which these individuals transform and their reasons for doing so can often differ, as can the aspect of whether they can actually control these transformations or not. 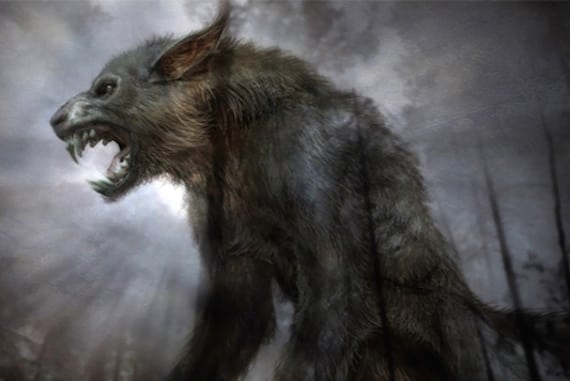 The Caribbean island nation of Haiti, already steeped in the dark lore of zombies and voodoo magic, also has its version of the werewolf, which they call the je-rouges, or “red eyes,” as well as referring to it as the French loup garou and by the creole word lougarou. In Haitian folklore these sinister creatures are said to be either powerful shape-shifting sorcerers wearing magical animal skins, or people possessed by nefarious spirits, which can twist and transform their bodies into a wide range of animals such as wolves, dogs, cats, eagles, lizards, snakes, and even chickens. At times they are said to become hybrid abominations that appear as winged humanoids or some other mixture of man and beast. Once the metamorphosis is complete, these creatures stalk out into the night to feed on blood, with their favorite said to be that of children. Indeed, one persistent part of the lore is that the je-rouge will typically steal or murder children, and will wake mothers in the middle of the night to ask for their children, with the sleepy mother often half-awake at best and sometimes saying “yes.” One Haitian woman has said of these werewolves thus:

They can be half wolf or half bird or any animal, but werewolf just means that they practice an evil art of Voodoo where they wear the skin of an animal and kill in the night. There have been many men who have been lynched when they were found out to be werewolves. Werewolves are normal men that use Voodoo to use the skin of an animal to turn themselves into monsters in the night. Because they are so strong when in their skin, the best way to kill a werewolf is when it is in the form of a man.

Stories of je-rouges have always terrified Haitians, and the myths cut across religions and socioeconomic borders, with belief in these creatures strong especially among the poor. Far from being seen as a mere legend, many Haitians truly believe that these creatures really exist, and claim to have seen them prowling about. Indeed, this belief is so strong that strange deaths are sometimes blamed on them, and suspicious people can be accused of being a je-rouge and lynched by frightened villagers. 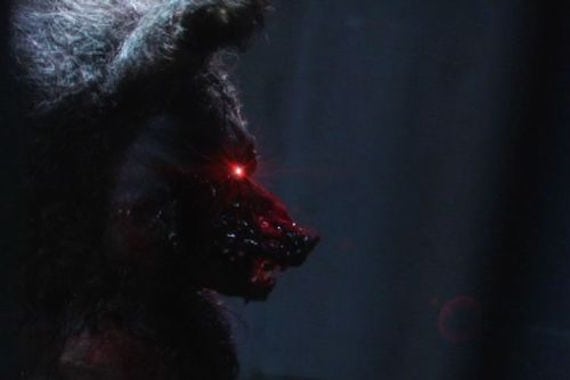 In the wake of the devastating 2010 Haiti earthquake some reports of this came out of the country and made mainstream headlines. The powerful, magnitude 7 quake struck the region of Haiti’s capital, Port-au-Prince on January 12, 2010, causing massive damage, killing hundreds of thousands, and affecting over 3 millions people, many of whom lost their homes and ended up packed into filthy camps of survivors or simply sleeping out on the streets. Many of the 690,000 people who ended up in these camps sleep out in the open, often right in the mud and grime, and in addition to dealing with the hardships of being homeless they apparently have also been haunted by the fierce and mysterious je-rouges, which have been widely claimed by survivors to be stalking the camps to attack people and steal away children. One inhabitant of one of these survivor camps, a university educated man by the name of Vladimir Cadet, said of the situation in statement to the Financial Times:

Almost all Haitian families are afraid of this. While they are sleeping in the street, they are living with this reality. There was a woman whose two children were taken by a werewolf. This kind of thing is spreading like wildfire. I have never seen one but I’ve been told by my mother that they exist. When I was a little boy, I was nearly taken.

The situation was so bad that Cadet claimed that the homeless had set up guard patrols at night to keep a lookout for the monsters. In many cases there has been alleged success in finding the creatures, and this has usually led to bloody retribution. In 2016, three deaf women named Jesula Gelin, Vanessa Previl, and Monique Vincent, ventured out from the village of Leveque, which was set up to provide homes for displaced deaf people, in order to collect supplies in Port-au-Prince, some 20 miles away. They were later found in a ditch, beaten, stabbed, burned, and with their tongues cut out in an apparent ritualistic murder. According to an Associated Press article on the case, one suspect said that the women had been killed because they were suspected of being werewolves. The article stated:

One suspect told investigators that the deaf women were killed by Gelin's husband because the family feared that they were werewolf-type creatures called "lougarou," their disabilities the product of a hex.

In another camp for those displaced by the quake a man suspected of being a je-rouge was beaten to death after trying to steal a child, and in yet another camp a woman was supposedly lynched and murdered while in the process of transforming. In yet another camp called La Grotte  a man killed by a mob was thought to be a je-rouge killing and kidnapping children as well. One resident of La Grotte named Michaelle Casseus said of this:

After the earthquake, the loup-garou fled from prison. He was bragging that he was in jail because he was caught eating children. During the night he went into the tents and tried to take someone’s child. He was killed.

Despite the claims that werewolves are running amok, the sad fact is that in the wake of the earthquake relief agencies and the UN have reported that instances of kidnapping and child smuggling have skyrocketed in this impoverished and disaster ravaged nation, where thousands of children were left homeless or orphaned by the calamity. Most of these are carried out by roving local gangs looking to sell the children into slavery for a profit, but foreigners have also had a hand in it, sometimes in an effort to take them away for illegal adoption in what they believe to be a better world. One shocking case of this concerned the arrest of 10 American Baptist aid workers who were accused of attempting to smuggle 33 homeless children ranging from 12 years old all the way down to 12 months old. As for the child stealing as it relates to werewolves, Sylvain Lafalaisse, Haiti’s secretary of state for finance, has said of this:

People talk about loups-garous to give a name to their fears, but it is child snatchers who snatch children, not evil spirits.

It is likely that the rise in reports of the je-rouges or lougarou of folklore after the earthquake stems from a volatile combination of the increased vulnerability of populations affected by the disaster, the opportunistic nature of human thugs who would prey on the weak, and the increased reliance on the belief in mysticism and voodoo magic to cope with the fierce hardships these unfortunate souls face. These age-old Haitian beliefs in dark folklore, magic, and spirits have come to the fore, and may be causing them to project supernatural monsters onto what are simply human monsters, and sadly even onto the innocent. Yet many of these people still continue to adamantly insist that the werewolves, these je-rouges, are real, and that they certainly do hunt the ravaged region of the earthquake. For them the darkness that has descended upon them is not only that of disaster and human suffering, but also of frightening supernatural monsters. It illustrates that in some cultures what we consider to be myth, legend and magic are a reality of life, and perhaps always will be.

Birds Found in Brazil With Hearts Mysteriously Cut Out