The Reality Behind ‘Earth vs. the Flying Saucers’

One of the most signiﬁcant UFO movies of the 1950s was Earth vs. the Flying Saucers (1956), which was very loosely based on Donald Keyhoe’s 1953 non-ﬁction book, Flying Saucers from Outer Space. In the movie, the last of a dying species of aliens arrive on Earth seeking a new home. The aliens request a meeting with world leaders to discuss their plans for occupation, but the US military, assisted by one America’s top scientists (played by Hugh Marlowe), formulates a plan of attack involving the use of sonar canons mounted on trucks to be ﬁred at the alien saucers—the sonar supposedly interfering with their propulsion and navigation systems, and disabling their force ﬁelds. 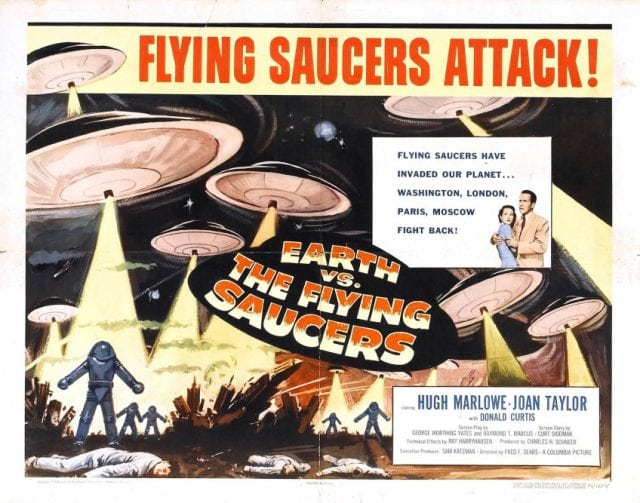 Conspiracy writer Kenn Thomas has noted that the ﬁctional battle strategy in Earth vs. the Flying Saucers seems to have been directly inspired by real-life UFOlogical events which occurred just one year prior to the release of the movie when legendary scientist Wilhelm Reich claimed to have used his “cloudbuster” invention to attack UFOs (which he believed were hostile) by sucking the energy out of them. Reich’s cloudbuster was an atmospheric device constructed from two rows of 15-foot aluminium pipes mounted on trucks and connected to cables that were inserted into water. Its appearance and functionality were strikingly similar to that of the sonar cannons in Earth vs. the Flying Saucers. Reich believed that his cloudbusters served to unblock cosmic ‘orgone’ energy in the atmosphere, which he said would be beneﬁcial to human health. Apparently, Reich also found them handy for shooting down alien spacecraft in what he described as a “full-scale interplanetary battle” in Tucson Arizona in 1955.

The production history of Earth vs. the Flying Saucers is intriguing. In 1955, Donald Keyhoe, then a jagged thorn in the side of the US government’s UFO secret-keepers, was approached by a group of Hollywood producers seeking to buy the rights to his aforementioned non-ﬁction book. The producers told Keyhoe their ﬁlm was to be a serious documentary about UFOs. Although initially suspicious, Keyhoe eventually went along with the deal. Big mistake. Upon its completion in 1956, the “documentary” turned out to be the schlock sci-ﬁ B-movie of our discussion. Keyhoe was outraged and demanded that his name be removed from the ﬁlm’s credits, to no avail. Someone, it seemed, had it in for this outspoken advocate for government transparency on UFOs (perhaps the same “someone” who, two years later, censored Keyhoe’s statement on live TV that ﬂying saucers were “real machines under intelligent control”).

Keyhoe’s book, despite its pulpy title, was a serious examination of UFOs that drew extensively from the USAF’s own investigations into the phenomenon. The movie that the book inspired, however, was an outlandish aﬀair, depicting scientists and the military as combating ridiculous rubber-suited aliens with plans to occupy the Earth. This deviation into kitsch fantasy is especially frustrating because the ﬁlm also retained a considerable amount of fact-based UFOlogical detail from Keyhoe’s source material. The ﬁlm’s saucers, for example, designed by Ray Harryhausen with a stationary central dome and a rotating outer-rim with slotted vanes, were based exactly on real-life descriptions collated by Keyhoe. Harryhausen also sought advice on his saucer design from UFO “contactee” George Adamski. The shrill sound emitted by the movie’s saucers also has been a common feature in UFO close encounter reports from the 1940s to present day, with witnesses often associating high-pitch whirring, humming, or hissing sounds with UFOs.

Particularly interesting is a scene in which Foo Fighters make a casual appearance. The scene in question sees heroic scientist Russell Marvin (Hugh Marlowe), his wife Carol (Joan Taylor), and the latter’s father, General Hanley (Morris Ankrum), having a family lunch while discussing their work on Project Skyhook—an American space program that launches research satellites into orbit. Suddenly, two glowing balls of light appear above their house, hovering silently. “Look! What are those lights?” asks the General. “They’re what the pilots call ‘Foo lights,’” Carol replies, “there have been so many around the project the last couple of days we all just take them for granted.” This is an unmistakable reference not only to Foo Fighters, but also to the many anomalous ﬁreballs reported by military personnel around sensitive government facilities in the late-1940s which resulted in Project Twinkle, a two-year study program at Holloman Air Force Base tasked with solving the mystery. 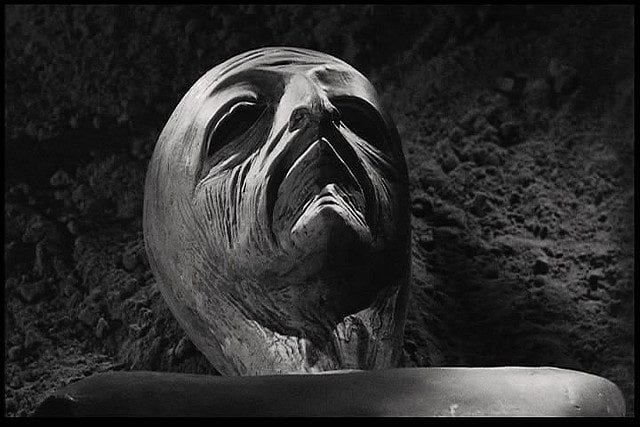 Earth vs. the Flying Saucers even has echoes of Roswell in the form of its alien invaders, not as they appear in their cumbersome spacesuits, but in their true form underneath. When the protagonists remove the space-suit from one of the dead aliens, the being bears an uncanny likeness to the alleged Roswell beings as described by ﬁrsthand witnesses from 1947, but these testimonies would not come to light until more than twenty years after the release of Earth vs. the Flying Saucers. How do we account for this apparent cinematic prescience? Were the Roswell witnesses inﬂuenced after the fact by Hollywood, or was Hollywood inﬂuenced by intelligence operatives with knowledge of the Roswell Incident?

You Can Back Up Your Brain — But There’s a Catch