The Strange Case of the Last Witch of Britain

There was a time in history when witches walked amongst us, allegedly using their dark powers to sow chaos and evil and so become the target of ruthless campaigns to prosecute and exterminate them. Whether they were ever really possessed of any power other than being in the exact wrong place at the exact wrong time, the suffering and death of these “witches” and innocents related to witch trials were certainly real. In this modern age of supposed scientific enlightenment, it would seem that there would be no more room for such things, that belief in witchcraft and dark magic would have evaporated and that organized witch trials and massacres of witches and warlocks would be a dark relic of a more primitive age. Yet there have been cases of official trials revolving around witches right up into surprisingly more modern times, showing that dark superstitions can be have a tenacious hold over us. One important case is that of a Scottish woman by the name of Helen Duncan, who in 1944 was arrested and tried under an archaic law called the Witchcraft Act of 1735. It was a case that would make headlines around the world and earn Duncan the moniker “The Last Witch.”

Born in Callander, Scotland in 1897, Duncan was by all accounts very strange from a young age. As a schoolgirl she apparently had the unsettling habit of blurting out strange talk of prophecies and claims of having vast psychic powers, and was known to be a bit hysterical. In later years she continued to claim to have supernatural abilities such as clairvoyance and speaking to the dead, and went on to become a rather popular travelling spirit medium. From around 1926 she journeyed all over Britain holding séances, and continuously impressed attendees with her supposed displays of vast paranormal powers of conjuring up and speaking to the spirits of the dead.

One of Duncan’s most well-known and popular feats was to go into trances during which she would regurgitate a slimy substance called “ectoplasm” from her nose and mouth. She also routinely invoked spirits that would allegedly materialize there before the startled onlookers and interact with them, with one regularly appearing spirit being Duncan’s spiritual guide, “Peggy.” In many cases these phenomena were captured in photographs and such were these spectacular shows of psychic power that the charismatic Duncan became a sensation, garnering many believers and regular attendees, including such famous people as then Prime Minister Winston Churchill himself.

Not everyone was as impressed with these purported strange abilities, and it was suspected that Duncan was no more than a scam artist using tricks, illusion, and sleight of hand to wow audiences, and investigation into these séances proved that this indeed seemed to be the case. For instance, it was soon revealed that the "spirits" that appeared during Duncan’s séances were no more than dolls that had been hung up on wires and done up with sheets and faces of papier-mâché, rubber gloves, or even pictures cut out from magazines. It was also found that Duncan was faking the ectoplasm by swallowing a either a length of cheesecloth or paper and egg whites mixed with chemicals before the show and then simply vomiting it out during the séance. Duncan of course denied that this was the case, and adamantly, often violently resisted any efforts to physically examine her before or after a performance. During one episode in 1931, an x-ray machine was brought to one of the séances by the National Laboratory of Psychical Research, who had been monitoring them, and Duncan became extremely unruly, to the point that she had to be physically restrained by her husband. The director of the laboratory, Harry Price, would say of the surreal scene:

At the conclusion of the fourth séance we led the medium to a settee and called for the apparatus. At the sight of it, the lady promptly went into a trance. She recovered, but refused to be X-rayed. Her husband went up to her and told her it was painless. She jumped up and gave him a smashing blow on the face which sent him reeling. Then she went for Dr. William Brown who was present. He dodged the blow. Mrs. Duncan, without the slightest warning, dashed out into the street, had an attack of hysteria and began to tear her séance garment to pieces. She clutched the railings and screamed and screamed. Her husband tried to pacify her. It was useless. I leave the reader to visualize the scene. A seventeen-stone woman, clad in black sateen tights, locked to the railings, screaming at the top of her voice. A crowd collected and the police arrived.

The medical men with us explained the position and prevented them from fetching the ambulance. We got her back into the Laboratory and at once she demanded to be X-rayed. In reply, Dr. William Brown turned to Mr. Duncan and asked him to turn out his pockets. He refused and would not allow us to search him. There is no question that his wife had passed him the cheese-cloth in the street. However, they gave us another séance and the "control' said we could cut off a piece of "teleplasm" when it appeared. The sight of half-a-dozen men, each with a pair of scissors waiting for the word, was amusing. It came and we all jumped. One of the doctors got hold of the stuff and secured a piece. The medium screamed and the rest of the "teleplasm" went down her throat. This time it wasn't cheese-cloth. It proved to be paper, soaked in white of egg, and folded into a flattened tube... Could anything be more infantile than a group of grown-up men wasting time, money, and energy on the antics of a fat female crook?

Several of Duncan’s accomplices in her sham and even her own husband would later admit that the whole thing was bogus, no more than smoke and mirrors, but even then she managed to keep fans and those who truly believed that she really had unexplained powers. However, this was not enough to stop her from being charged with fraudulent mediumship in 1933 and paying a hefty fine. Nevertheless, she went on with her séances, which amazingly remained just as popular as ever, all the while insisting that her powers were real while at the same time absolutely refusing to submit herself to any sort of scientific tests or observations that would prove her to be a fraud.

One might be wondering at around this point as to how a largely debunked fake medium could have possibly been seriously accused of being a real witch, and to answer that we have to go into the 1940s when the specter of World War II was looming large. In November of 1941, Duncan held a séance at Portsmouth, England, during which she reportedly contacted a deceased sailor from a Royal Navy ship called HMS Barham, who proclaimed that the ship had been sunk in the Mediterranean Sea off the coast of Egypt. This was rather shocking and a bit problematic for the British Navy because, although that ship had indeed really been sunk by a German U-boat, costing the lives of 861 British seamen, news of this had not been publicly released yet, and wouldn’t be for several months as the government tried to keep the devastating loss quiet. It is unclear just how Duncan could have possibly known about the sinking, but it was certainly enough to get the interest of paranoid authorities worried that she would spill other wartime secrets.

A séance held by Duncan in January of 1944 was subsequently attended by undercover police, who made their move and apparently arrested her and three audience members at just the moment the ectoplasm came spewing out of her mouth. Duncan was initially charged with a relatively minor offense under the Vagrancy Act of 1824, but this would have gotten her little more than a slap on the wrist and authorities wanted something that would stick more in order to get her off the streets and out of the picture for longer, as they were antsy that she would give up more secrets and the D-Day Normandy landings were approaching. They likely did not for a second believe that she was using real supernatural powers, but she was seen as having some potentially dangerous inside source. For this reason, they found and invoked the much more serious Witchcraft Act of 1735, which made it a crime for anyone to claim to have magical powers, and although dusty after not having been used for over a century was still technically considered law. 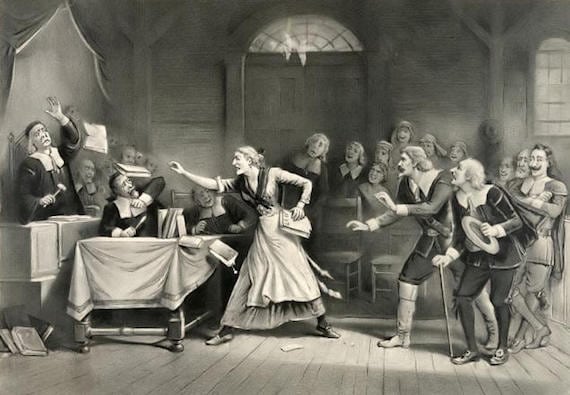 The actual use of a charge of witchcraft and the ensuing trial at the Old Bailey in London became an absolute media circus, even getting people’s minds off of news of the war. The trial was a bit of an absurd farce right from the beginning, with the judge in all earnestness warning Duncan not to use any supernatural powers before the proceedings began. There was also no physical evidence whatsoever that Duncan had done anything wrong, with the trial relying solely on eyewitness testimony, the majority of which denied any crime taking place. Prime Minister Winston Churchill derided the whole affair from the beginning, saying that the invocation of the Witchcraft Act and resulting trial was “obsolete tomfoolery.” Nevertheless, despite all of this Duncan was found guilty and sentenced to 9 months at London’s Holloway Prison, a sentence for which all of her appeals were denied.

After her release from prison, Duncan immediately went back to performing her séances, and she faced several charges of fraud over the years that never went to court. She also faced continual harassment from the public right up until her death in 1956. It is likely that this scam artist had done nothing more than trick gullible people and get some second hand leaked gossip on the sinking of the HMS Barham, but there are those who to this day believe that Duncan was the real deal, an actual witch with magical powers. Whatever the case may be, one of the only good things to come of the whole episode is that it led to the Witchcraft Act being repealed in 1951 and the subsequent recognition of spirituality as a religion, something that should have been done long before. Despite this, efforts of an extended campaign to get Duncan posthumously exonerated and declared as falsely convicted have proved fruitless, with the Scottish Parliament repeatedly rejecting petitions to pardon her as recently as 2001, 2008, and 2012. Unbelievably, her charge and conviction still stands.

Whether or not Helen Duncan ever had any real psychic abilities or not, her case still manages to be one of the weirder witch trials ever, especially considering that it happened in the 20th century. It seems shocking that this could have happened, but sadly although Duncan was the “Last Witch” of Scotland, a surprising number of countries still conduct things much as they did in Medieval Times, prosecuting and even executing witches right up into modern times. Some otherwise developed countries still have their own official versions of the Witchcraft Act, such as Israel with its law that sets two years' imprisonment for "witchcraft, fortune telling, or magic for pay," and South Africa with its Witchcraft Suppression Act of 1957, which prohibits activities related to witchcraft, witch smelling or witch-hunting. It seems that for all of our modern civilization and science, witchcraft is here to stay for a while.

Bee Sting Acupuncture Can Kill You