The next predicted perihelion of Halley's Comet will occur on July 28, 2061. Those of us lucky enough to still be alive then will have a great view of the famous orb because it will be on the same side of the Sun as the Earth. Unfortunately, the number of us lucky enough to see it may be zero. A man claiming to have traveled to the year 2061 says there will be no humans around to gaze at Halley’s Comet because a piece of it breaks off and slams into Lake Erie, killing everyone on the planet. Wait, what?

“Hi, my name is Jeff Williams and I time traveled to the year 2061 and back. In the year 2061 the world no longer exists. I was sent back as part of a top secret group called Solarity in order to ensure that the timeline remains stable.”

Hi, Jeff. Thanks for the video (see it here) about your trip to the future and back. Well, Solidarity is definitely top secret because there doesn’t seem to be any information on it – time travelish or otherwise. It’s great they’re concerned about the “timeline” because there’s been a number of alleged time travelers popping up recently and there’s a lot of conflicts between their stories … not to mention that a few of them traveled beyond 2061 and Earth seems to be doing just fine after multiple future passes of Halley’s Comet. 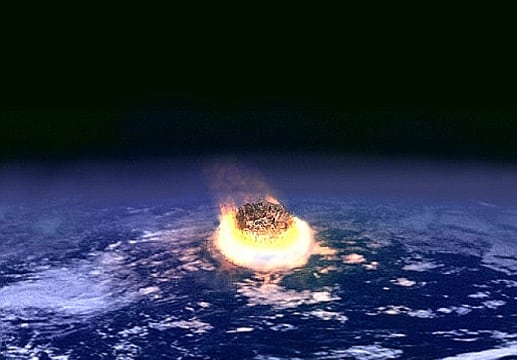 How is Solarity keeping anyone from messing with the timeline? With Hollywood time travel movies, of course!

“For example a few years ago a time travel movie came out called ‘95ers: Echoes’. That movie is important because I was born in the year 1966 and when I’m 95-years-old if I’m still alive – which I won’t be – it will be the year 2061. The year that the world is going to end.”

"95ers: Echoes" was released in 2013. According to its IMDB description, the plot involves an FBI agent with time-bending powers whose scientist husband disappears mysteriously and she must fight strangers with terrifying technologies “before the fabric of her being--and the ones she loves most--fade out of reality.” It seems to be no more dystopian than any other time travel movie and didn’t do well at the box office. He also mentions the 2009 apocalyptic movie, “The Road,” which didn’t do well either. You’d think they’d have blockbuster movies figured out by 2061.

“Now why is the world going to end in 2061 and how? Well it’s the next time that Halley’s Comet swings by the planet. And the scientists will say ‘oh no, Haley’s Comet is going to miss. It’s a sure thing.”

Then there’s Jeff’s revelation that all of this will be caused by Halley’s Comet breaking off a big chunk that plunges into Lake Erie and vaporizes life as we know it, leaving what Jeff visited.

Halley’s Comet, for those born after the last time it visited or have never heard of the band, is made of frozen water, carbon monoxide, carbon dioxide and other gases a surrounding a 15 by 8 km nucleus of a large number of small pieces with called “a rubble pile.” A solid asteroid that size brought an end to the dinosaurs, but Halley’s Comet isn’t solid to begin with and its pieces, while they might destroy a city, aren’t quite apocalyptic.

“But what I did hear was I heard peoples’ voices and them talking to me.”

So Solarity exists but not necessarily in a physical form that requires an Earth as we know it to survive. This is all very confusing, Jeff. Perhaps you should talk to Noah Novak. He’s a fellow time traveler who came to 2018 from 2030 where he claims to have met his future self from 2070, nine years after your Halley’s apocalypse. Maybe they’ve already messed up the timeline.

Or they’ve given me the plot for my next movie