When Sea Serpents Made Big News

It’s not often that one sees a story of a giant monster splashed across the pages of the New York Times! That, however, is exactly what happened on July 1, 1908. That's right: sometimes truth really is stranger than fiction. The headline surely caught the attention of more than a few people. To say the least. It was headlined: “200-FOOT SEA SERPENT. Seen at 3 Bells in Gulf of Mexico – Enormous Rattles on Its Tail.”  Well, that's quite an opening salvo of words!

Of course, tales of sea serpents a century or more ago abound - and from numerous parts of the world. Here are a couple of examples, which demonstrate what was going on in the oceans of our world in times past. The first story involves a sea serpent seen on May 9, 1830 by the crew of the Rob Roy, a British Royal Navy ship that was homeward bound after a lengthy sea-journey across the Atlantic Ocean. As the ship sailed by the island of St. Helena, something remarkable occurred, as the Rob Roy’s captain, James Stockdale, recorded in his official log the following:

"About five p.m. all at once while I was walking on the poop my attention was drawn to the water on the port bow by a scuffling noise. Likewise all the watch on deck were drawn to it. Judge my amazement when what should stare us all in the face as if not knowing whether to come over the deck or to go around the stern – but the great big sea snake! Now I have heard of the fellow before – and I have killed snakes twenty-four feet long in the straits of Malacca, but they would go in his mouth." 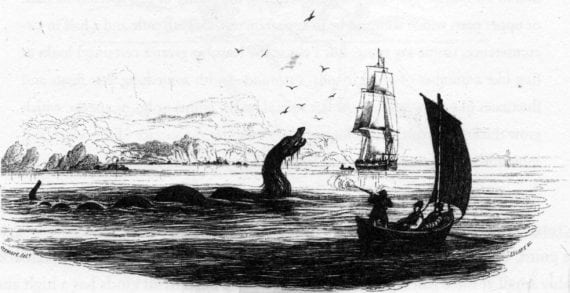 And, here's the second (of many): The afternoon of July 15, 1825 turned out to be a most memorable one for an amazed group that included a William Barry and a certain Mr. Goreham and his family and servants – all of who were in the harbor area of Halifax, Nova Scotia, Canada when from the waters surfaced, well, something. They were all clear on, and deeply shocked by, the nature of the mysterious creature briefly in their midst. Very much snake-like, it was around sixty-feet in length, and propelled itself along the waters in an odd and curiously unsettling wriggling motion.

The cases above are two of quite literally hundreds on record. All of which brings us back to the matter of the media's coverage of the July 1, 1908 case. The writer of the article said: "What is confidently believed to be a sea serpent has been sighted and narrowly inspected by the officers crew, and fifteen passengers of the steamship Livingstone of the Texas-Mexican Line. All of the witnesses made a sworn affidavit to this effect before United States Consular Agent Charles W. Rickland at Frontera, Mexico."

We also learn from the article that the location was roughly 80 kilometers north of Frontera in the Gulf of Mexico. According to the eyewitnesses, the enormous beast got within around 20 meters of the ship. Incredibly, according to those who were able to see the mighty leviathan, it appeared to be sleeping when sighted! For around fifteen minutes, the shocked and amazed witnesses had the monster in sight. All were adamant that it was somewhere in the region of 60 meters in length - which, if their estimations were correct, is incredible. Despite the astounding nature of the story, the ship's captain - one G.A. Olsen - signed a statement confirming what, exactly, was seen by him and others.

As for the appearance of the enormous beast, we're told that its body was around the thickness of a barrel, while its color was dark brown. The head was around 2 meters in length. When the serpent awoke, its tail-end rose out of the water and a loud "rattling noise" emanated from it. The mysterious animal kept all of the witnesses amazed and entranced until it was gone. The mystery was never resolved.