Wild Beasts of the Mountain: An Early Account of Siberian “Wild People”

Johann Shiltberger, a 15th-century Bavarian native who became a captive traveler with the Ottoman Turks, wrote extensively of his adventures later in life. He saw a remarkable amount of journeying for his day, a time during which many of Shiltberger's countrymen would never have traveled distances greater than several miles from their homes, let alone span continents in their journeys.

Toward the end of the 14th century, Schiltberger had taken up with those in attendance of Lienhart Richartinger, thereafter joining the army of Sigismund, King and eventual Emperor of Hungary. Schiltberger became one of many who waged battle against the Ottoman Empire at this time, which led to his capture in 1396, after sustaining wounds on the battlefield at Nicopolis. Imprisoned under Sultan Bayezid I, Schiltberger was put to use as a runner for the Sultan after recovering from his injuries, where he thereafter traveled with the Ottoman army to parts of Asia and North Africa.

Eventually, Schiltberger was sold off by the Turks to the Khan of Siberia, where he remained for three decades before he finally was able to return home to Bavaria. Upon his return, he wrote extensively of his travels, resulting in his book The Bondage and Travels of Johann Schiltberger, a native of Bavaria, in Europe, Asia, and Africa, 1396-1427.

There are many passages in the book which evoke wonder, though one of particular significance comes to mind here. In Shiltberger's narrative, he describes his travel to the country of Siberia, and the belief that amidst its geography one may find the ends of the Earth itself:

There is a mountain in that country, which is thirty-two days' journey in extent. The people there, them-selves say, that at the extremity of the mountain is a desert, and that the said desert is the end of the earth; and in this same desert nobody can have an habitation, because of snakes and wild beasts.

Schiltberger's description of the harsh way of life in the Gobi desert remains accurate even today. Hot in the summer and exceedingly cold during the winter months, the extremities of the vast Siberian steppe make for an uninviting way of life for any creature which may choose to reside here. To the north, the frosty peaks of the Gobi Altai mountains loom over the landscape; further to the southwest, conjoined by the western portion of the Alashan Plateau, are the Qilian Mountains, bordering the northernmost portion of the Tibetan Plateau. 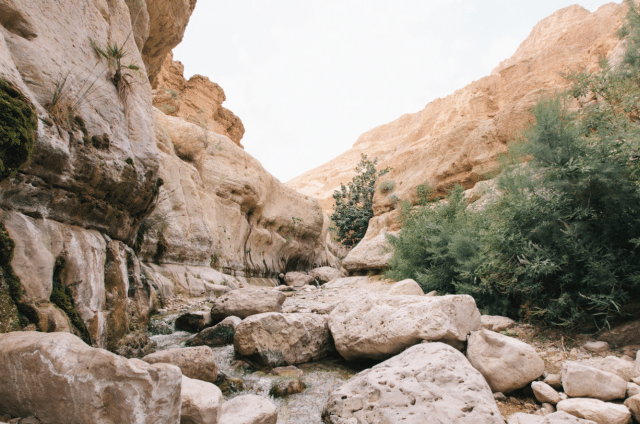 Here amidst this mountainous region of Western Siberia, Schiltberger describes another variety of animal that exists, which was very different from the snakes and wild beasts of the Gobi Desert:

On the same mountain there are savages, who are not like other people, and they live there. They are covered all over the body with hair, except the hands and face, and run about like other wild beasts in the mountain, and also eat leaves and grass, and any thing they can find. The lord of the country sent to Edigi, a man and a woman from among these savages, that had been taken in the mountain.

The description given by Schiltberger of these creatures is similar to other early accounts of wild people from Siberia and surrounding regions. An earlier account given by Abul Hassan Ali Masudi, the "Herodotus of the Arabs," similarly described what the author likened to "monkeys that approach in appearance the figure of man," which were said to reside in parts of modern Russia and the surrounding countries. Similar reports also came from the Caucasus in the 10th century, where Arab travelers wrote of forests there which were "inhabited by a sort of monkey having an erect stature and round face; they are exceedingly like men, but they are all covered with hair." The creatures, according to the Arabs, "are deprived of speech [and] express themselves by signs."

In the demonologies of the Western intellectual tradition, these "beasts" are little more than instances in an otherwise impressive tradition of "wild men" throughout parts of the ancient world. As discussed by the likes of Richard Bernheimer in his well-regarded Wild Men in the Middle Ages: A Study in Art, Sentiment, and Demonology, these types of imaginary characters said more about the minds of the authors who discussed them, rather than being an inkling of things that should be believed to exist.

But is this necessarily the case? It is remarkable, at times, the depth of historical accounts that constitute the tradition of hairy humanoids from virtually all parts of the world, and their consistency in terms of appearance, lifestyle, and regions where they choose to reside. Which makes it all the more curious that, when confronted with the question of their existence, many modern scholars would offer that there is simply no historical basis for such creatures, let alone anything in the fossil record to support such things.

Perhaps it is simply that the rudiments of a historical basis for the wild man have been mislabeled as "demonology," though more likely, they have been overlooked and ignored by many of the very ones espousing that no such history exists. If, however, there is anything more to accounts such as that of Schiltberger, and the writings of countless others over the centuries, then perhaps a survey of the historical basis for relict non-human bipedal primates is indeed worthwhile.